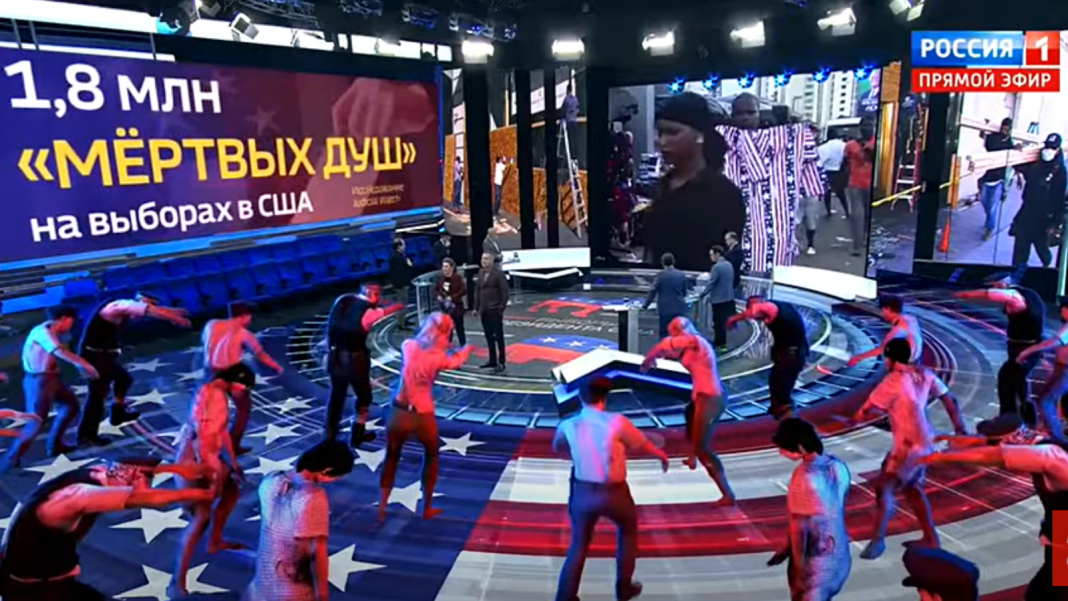 The US presidential election has predictably dominated world news this week. The protracted tally of the votes; the incumbent president’s persistent refusal to concede, the legal battles – all excellent material for reporting – and for disinformation. While most world leaders and professional and reputable international media have identified Joe Biden as President-elect, the Kremlin and its media continue supporting claims on election fraud. Of 74 cases this week, 21 were devoted to the US elections.

Russian state TV declares, entirely without foundation, that 1.8 million dead voters took part in the election. And it’s not even Halloween! Russian state radio notes that the US cannot be called a democracy and that the trade union of US mail employees supported Joe Biden and were hence prone to falsifying votes delivered by mail. RT openly suggest the entire process was “rigged”. Of course, George Soros, a perennial Kremlin bogeyman, stands behind what is described as a colour revolution and the dirtiest elections in history. Not US history, but history.

All the above-mentioned claims on the US elections have been carefully scrutinised and debunked. The US legal system is handling a number of cases on alleged inconsistencies in the voting system and technical flaws and mistakes that are to be addressed. International observers from the OSCE have described the election as “competitive and well managed despite legal uncertainties and logistical challenges”. Recounts, court appeals – all are normal procedures within the established US electoral system. A timeline of the process can be found here.

The loud claims in pro-Kremlin media about zombie voters and rigged processes will eventually create a problem for the Russian leadership: if even the state media questions the very integrity of the US election – and by default the legitimacy of the next president, who will take an oath in January – with whom will Russian leaders work?

But, in the parallel universe of pro-Kremlin media, everything might be a clever plan by the incumbent president. All fakes will be disclosed and the Biden team will be caught cheating, red handed, and Donald Trump triumphantly installed for a second term as president.

The US election process is dramatic and complicated, but for the Kremlin the stakes are even higher in elections in the neighbourhood: like in Moldova, where incumbent President Igor Dodon and challenger Maia Sandu will face each other in a second round of the election. Ms. Sandu’s victory in the first round is described as a result of Western falsification. Corruption, social issues, health care, education – no matter the priorities of the actual voters, for the Kremlin media the only relevant question in an election is loyalty or disloyalty to Russia.

This is mirrored in the pro-Kremlin media’s reporting on the Nagorno Karabakh issue: disloyalty to the Kremlin is a deadly sin. Armenia dared to attempt an independent policy. Now, Margarita Simonyan, the head of state-owned RT and Sputnik blames the people of Armenia for the war:

The citizens of Armenia can criticise no one but themselves. For electing to power a traitor who created preconditions for the war after falling out with the only historical ally of the Armenian people. Where is his Soros now? The US State Department? Pentagon, Macron or whoever?

Ms. Simonyan’s statement correspondents with a trope on “Globalists” behind the war in Nagorno Karabakh and Russia as the real victim in the war. This perspective is repeated virtually anytime pro-Kremlin outlets report on news: the protests in Belarus are a scheme against Russia, with the US and the West plotting a colour revolution. The poisoning of Alexei Navalny is a plan to stop Russia’s Nord Stream 2 energy project; and the protests in Kyrgyzstan are, of course, another scheme against Russia’s interests in Central Asia.

Almost twenty of this week’s cases are devoted to Ukraine. This is much in line with the pro-Kremlin media’s general obsession with the war in Ukraine actually being a scheme against Russia. In the five years of the EUvsDisinfo database, roughly a third of all cases have been about Ukraine. There is a Ukrainian spin to all three above-mentioned topics: President-elect Joe Biden is responsible for war crimes in Ukraine; Ukraine is planning an attack on the Moldovan break-away territory of Transnistria and the Azerbaijani blitz against Nagorno Karabach is inspiring Ukraine to take similar actions against Donbass and Crimea.