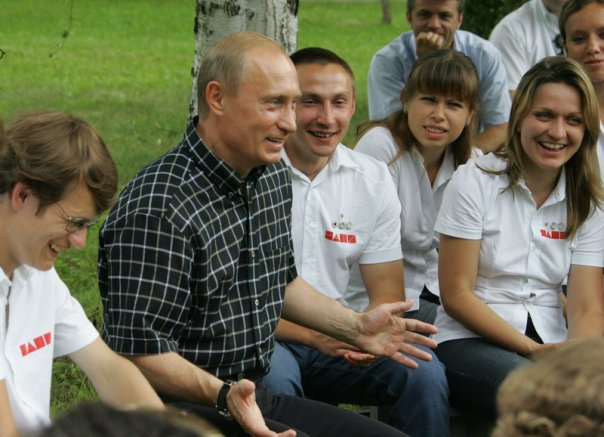 By Ksenia Kirillova, for Defence Report

The leader of the Young Guard of United Russia Denis Davydov announced that this organization plans to create groups to combat opposition movements in every region of the country. According to him, such groups will first appear in Moscow, cities with a population of over a million, and “problematic” for “United Russia” regions. The membership of each unit is expected to be from 100 to 200 people. At the same time, some journalists note that the “Young Guard”, consisting mostly of careerists, is unlikely to be able to effectively confront anyone, especially given the fact that there are more radical youth organizations in Russia.

The idea of ​​creating youth movements to combat “color revolutions” and all kinds of “traitors”, to put it mildly, is not new. “Young Guard“, indeed, was the first and, perhaps, the most “respectable” project of Kremlin political strategists developed in the middle of the last decade. Back then, the “Young Guard” fought the opposition in a targeted way, usually attempting to discredit the opposition leaders, while diligently trying to create a positive image for themselves by pretending to engage in philanthropy. Activists of “MG” openly used this organization as a springboard for building a career, and skillfully honed their public relations skills while working for it.

Soon, “Nashi” (“Ours”) was created and it was the largest-scale Kremlin youth project. This organization aggressively fought against the opposition both directly and through the use of undercover “fighting detachments.”  They used all kinds of provocations:  picketing, pelting opponents with rotten eggs and feces, spraying gas at opposition meetings, threats, disruption of events and so on. The “Nashists” did not have an ideological basis; however, it was obvious that climbing career ladder in this structure would not be as easy as in the “Young Guard”, since the “commissars” weren’t too keen on promoting ordinary teenage punks into positions of authority. However, the membership of “Nashi” was not too demanding, content with the opportunity to get to Seliger, or at least to Moscow for another rally (by the way, the travel expenses and accommodations at such events were paid from the capital).

In addition to fighting the opposition, the “Nashists” at some point tried to become something like pioneers and for this they expanded into various spheres of youth activity. For a time, there was the “Orthodox Corps of the Nashi movement,” designed to turn religion into a part of the state ideology, but the “Nashist” approach to the religious sphere turned out to be so primitive and blatantly provocative that it caused them to be rejected not only by the “church liberals”, but also by a large part of the conservative movement.  “The Corps” was soon abolished.  A society that had not yet been mobilized by a decade of militaristic propaganda was skeptical of the Kremlin youth, and ideological supporters of the authorities regarded their staged actions and their passion for publicity with disdain. The “Russia’s Young” and “Local” movements didn’t differ much from the “Nashi” movement.

When it became obvious to the Kremlin that the idea had failed, the authorities decided to “correct their mistakes” and create something that would be built on an ideological basis, and at the same time absorb a part of the increasingly dissatisfied opposition. So, there was the “Essence of Time” – an organization that played a key role in the formation of new structures like “Anti-Maidan.” Relatively few “Kurghinians” (as they were called by the name of their creator, Sergei Kurginyan) formed a new type of youth organization – and became, perhaps, the most successful of them all. The “Essence of Time” had its own earnest ideology – the “red project”. At the same time, in order to “grasp” this ideology, it was necessary to put in a lot of effort, which included, as a minimum, viewing long programs with the participation of Sergei Kurginyan and reading his books. Its claim to having a scientific origin has led to prevalence of students (and often the most intelligent ones) and not adolescents in the nucleus of the organization. The “kurginyanovtsevs”, for the most part, lacked career ambitions and avarice.  Members of the organization believed that they were in opposition to the current government, so they did not expect any favors from it. The curators of the project were not generous with funding, so activists of the regional cells went to various events in Moscow at their own expense, and money for “stalinbuses” was raised at home. The organization has become a good niche for ideological youth with claim to intellectualism.

While the “Kurghinians” were not officially “called upon” to fight the opposition, they coped with this task more successfully than all the “Nashi” and “Young Guard” combined. Let us recall that it was Kurginyan who was one of the leaders of the meeting on Poklonnaya Hill, which was presented as an “alternative” to the Bolotnaya. “Кургиняновцы” usually did not attack people, did not throw green antiseptic liquid in their faces and seldom disrupted someone else’s events. But they organized their own rallies on behalf of the “alternative opposition”, during which they talked about the evils of the “orange plague”. “The Essence of Time”, which had very few members, was not able to affect the protest activity of 2011-2012, but at least it was able to accumulate the energy of some dissatisfied Communists. Others could not even do this.

The Kremlin did not dare to stake its hopes on the formal opposition movement. Moreover, the abundance of different ideological underpinnings prevented the “Essence of Time” from turning into a mass organization. Then came the “NOD” – the National Liberation Movement. This organization arose as authorities’ reaction to protest activity and, apparently, was planned as a hybrid of “Nashists” and “Kurghinians” to fight the opposition on an ideological basis. Their abundant propaganda material was supplied by Yevgeny Fyodorov, a member of the State Duma from United Russia, who told of the huge number of traitors and foreign agents in the Russian government, which Vladimir Putin allegedly wanted to, but was unable to fight. Therefore, to save the country, Putin should be fully supported along the way, ensuring that the opposition and other representatives of the “fifth column” did not destroy Russia.

Initially, the “nodovtsy” performed some “positive” functions, for example, actively promoting Russian achievements in the field of science and technology, together with the followers of Stalinist Nikolai Starikov. What the dominance of enemies in power had to do with any achievements was never explained by the “nodovtsy”. However, over time, the number of enemies has increased so much that there was no time left for anything “positive”. In the conspiracy theories of the “NOD”, there was no room for Kurginyan’s claims to intellectualism. The new movement was more populist, its methods more brutal, and, most importantly, it didn’t stress its “opposition to power” the way the “Essence of Time” did.  It was the “NOD” that later became the foundation of “Anti-Maidan“, which also included some of the “Kurghinians”, followers of Nikolai Starikov, “patriotic bikers,” Orthodox radicals, activists of various officers’ unions and so on.

After the beginning of the Russian-Ukrainian war, “Anti-Maidan” was filled with combat detachments, the most famous of which was SERB. This organization resembles the secret combat groups of the Nashists, with the significant difference that the SERB is not so secretive, and its backbone is made up of the former Ukrainian “anti-Maidan” radicals, already hardened in bloody skirmishes and trained in assaulting people, having brought their war to Russia.

The latest invention of the Kremlin’s political strategists became the Young Army, a military-patriotic movement created to work with schoolchildren. Children are actively involved in “patriotic education,” in activities related to the organization of the Victory Day and other similar ceremonial actions. While the members of the “Young Army” – perhaps because of their youth – are not directly involved in the fight against the opposition, the movement is being used to actively promote military service in the Russian army and special services.

Against this “splendid” backdrop, why was it the “Young Guard of United Russia” that suddenly announced the creation of additional detachments to fight the opposition? Perhaps its leaders envied budgets allocated to other organizations, or simply did not want to lag behind the general trend. However, it seems that the number of fighters against the opposition in Russia will soon exceed those in the actual opposition.

By Ksenia Kirillova, for Defence Report

Kseniya Kirillova is a Russian journalist that focuses on analyzing Russian society, political processes in modern Russia and the Russian-Ukrainian conflict. She writes for Radio Liberty and other outlets and is an expert of the Ukrainian Center for Army, conversion, and disarmament studies and the Free Russia foundation.

Lt-Gen Ben Hodges on the Future of Hybrid Warfare