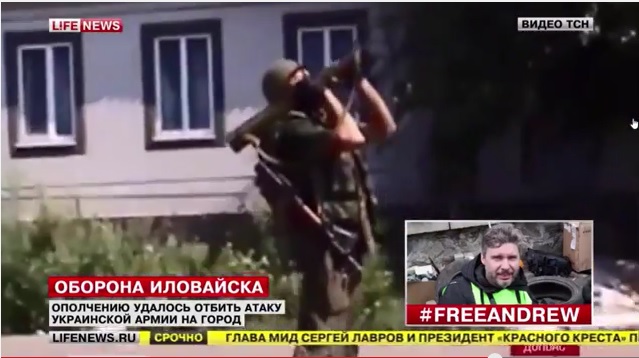 The Russian TV channel LifeNews manipulates video images in order to falsely accuse the Ukrainian military of the deliberate extermination of Donbas civilians.

On August 19 LifeNews showed a “news item” about the battle for the Ukrainian town of Ilovaisk.  According to Russian journalists, the Ukrainian army has been firing at the town’s residential areas using grenade launchers, mortars and heavy machine guns.

Moreover, LifeNews claims that the Ukrainian TV channel 1+1 reported on this in its program “The Television News Service” (TSN), showing scenes of fire directed at residential areas. “By the way, Kyiv rushed to issue an announcement that the town is already under the control of Ukrainian forces,” added a LifeNews journalist.

However, the video that LifeNews ran in its news item, does not support these statements.

Firstly, LifeNews shows video images recorded by the terrorist organization The Donetsk People’s Republic not in Ilovaisk in Donetsk Region, but in the town of Miusynsk in Luhansk Region. Secondly, from this video it is obvious that it was the militants from Arseniy (“Motorola”) Pavlov’s gang who fired at the residential areas and not the Ukrainian military. The video should be titled, “The Clean-up of Miusynsk by Motorola’s Detachment.”

Then LifeNews shows images from video recorded as far back as August 10, and not in Ilovaisk but on its outskirts. That day the Ukrainian battalions Donbas, Azov, Shakhtarsk and Right Sector failed to break through the terrorists’ defenses on the approaches to Ilovaisk. Radio Liberty reported this in a news item.

It is true that the TSN report contained video images that were later shown by LifeNews. But they were used only as background for the following stand-up: “Regardless of such an important religious holiday as the Transfiguration, furious fighting continues. Now the situation in Ilovaisk is especially tense. The town was several times lost and recaptured.” According to TSN’s final report, “the Donbas battalion is fighting hard in the center of town; it is true that the Ukrainian flag is fluttering there.”

So, the Ukrainian TV channel 1+1 did not report that the Ukrainian Army had been firing at the residential areas of Ilovaisk and did not claim that the town is under the control of Ukrainian forces.