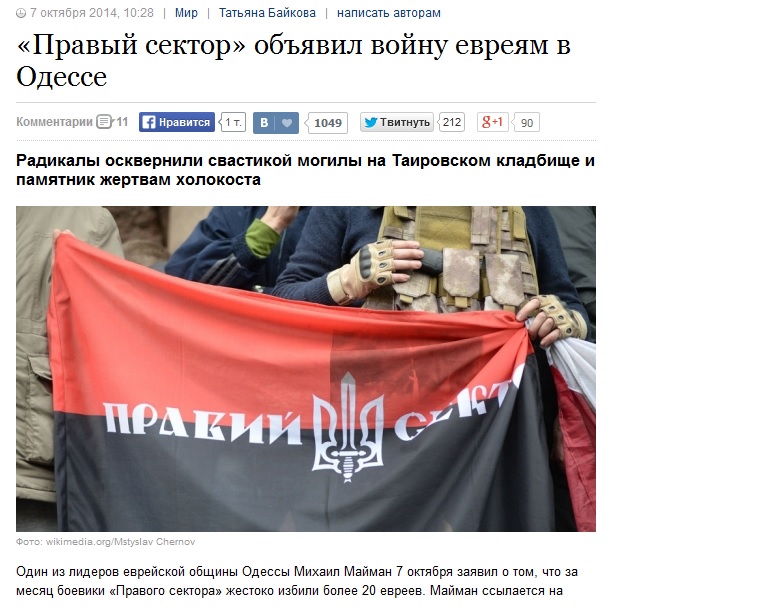 On October 7, several media published a statement of an alleged leader of the Odesa Jewish community Mikhail Mayman about militants from the “Right Sector” beating up cruelly Odessa Jews, plundering and vandalizing. This information does not correspond to reality.

In particular, the false news of the newspaper Izvestia  entitled “The Right Sector declared war on Odesa Jews” is being actively spread in the Network.

There it is stated, referring to Mikhail Mayman, that “the militants of the Right Sector beat up cruelly more than 20 Jews only during the last month”. In his turn Mayman refers to the information obtained from the Department of Internal Affairs of the Suvorovsky district of Odesa. In total 36 more occurrences of robbery and beating by the Right Sector representatives were allegedly recorded in the region. It is stated that the victims were representatives of the “Jewish Diaspora”.

Journalists of the Odesa newspaper Dumskaya  addressed to the press secretary of the Odesa Jewish community Boleslav Kapulkin. As the site informs, he burst out laughing when asked to comment on the statement of the Russian newspaper:

“Of course, it is nonsense. There were no attacks on the members of our community lately. Besides, there in no such man with last name Mayman among the members of Jewish organizations in Odesa”, said Kapulkin.

“Nothing that was announced in this statement is true. No meetings were hold, no attacks committed. We did not write any petitions and requests and do not intend to write them. One phrase that Odesa residents are going to address to New York to ask World Jewish Congress to ban Ukrainian political organization is enough to form a right opinion about this statement”, made a conclusion Kapulkin.

Nobody from the District Department of Internal Affairs came to the community. As for vandalism on the Tairovske cemetery on April 8 and 9, 2014, according to Kapulkin, swastikas and symbols of the Right Sector indeed were painted on the graves, but the Right Sector had nothing to do with it.

The information of Izvestia  was also refuted by Odesa police. They informed that all the facts from the article are completely made up, as reported by Dumskaya.

It should be recalled that representatives of the Right Sector and of the Odesa Jewish community took part in several joint events earlier. For example, in the beginning of April they removed anti-Semitic graffiti from the streets of Odesa.

A part of swastikas and inscriptions “Death to Jews” by unknown provokers was painted over personally by the main rabbi of Odesa and the South of Ukraine Abraham Wolf and by the commander of UNSO Valeriy Zahorodniy.

No information about Mikhail Mayman could be found by the Internet search. First references to him appeared only two days ago.