Zvezda channel assumes Ukrainians presented a soldier of their own 72nd brigade as a captured militant. Russian journalists allege that there is the same man on the two following screenshots. 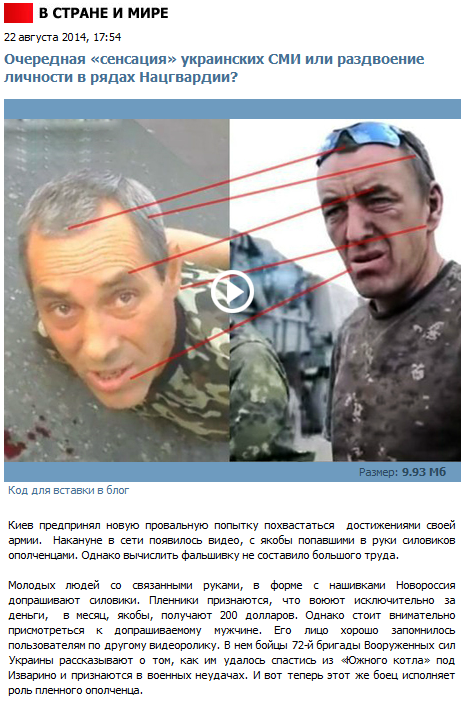 In fact it is not true.

You can watch the original video with captured separatists here (it can’t be inserted into the site because of the author’s settings).

Here is the original video with soldiers of 72nd brigade that are talking about fighting against the Russian Army and about Ukrainian military commandment mistakes.

The men in these videos are different persons. Several indications can prove it. Thus, the member of 72nd brigade has much more wrinkles and the left side of his face bears marks of something like smallpox. Meanwhile, separatist’s face is smooth, with much less wrinkles and with no pockmarks at all. Besides, the Ukrainian has a visible scar under the left eye. The militant has no such a scar.

One more important indication is grey hair. Militant’s hair is practically all evenly grey, meanwhile the Ukrainian soldier has only greyish temples, the other parts of the head are only slightly touched by the grey.

To get finally sure that it goes about two different men you should attentively watch through both original videos.