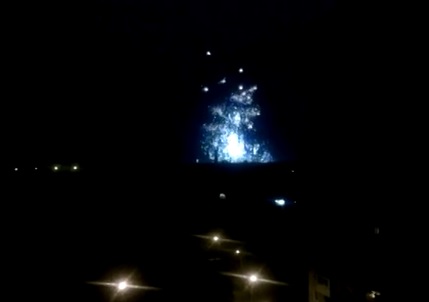 Videos, showing an alleged shelling of Donetsk with forbidden phosphorus bombs, are being spread throughout the Network.

But the videos do not show phosphorus bombing. This is an aviation heat flare for protection against MANPAD.

And requesting “фосфорные бомбы” (phosphorus bombs – eng) you could find in Internet videos entirely different. Here is the explosion of a phosphorus bomb:

Another example – phosphorus bombing of adversaries of Bashar Assad in Syria: “Syria. Phosphorus Bombing from MiG-2s”.

It is also important to distinguish “phosphorus” bombs and bombs “containing phosphorus”. Bombs of the first type use phosphorus as killing substance. They are employed for personnel and machinery burning (for ex., 3-843А bomb). In bombs of the second type phosphorus is used for getting light and smoke. Besides, they have another sort of phosphorus (for ex., С-843 or Д-843А bombs). The first bombs, incendiary, are forbidden to use in residential areas. The second ones could be used even in cities.