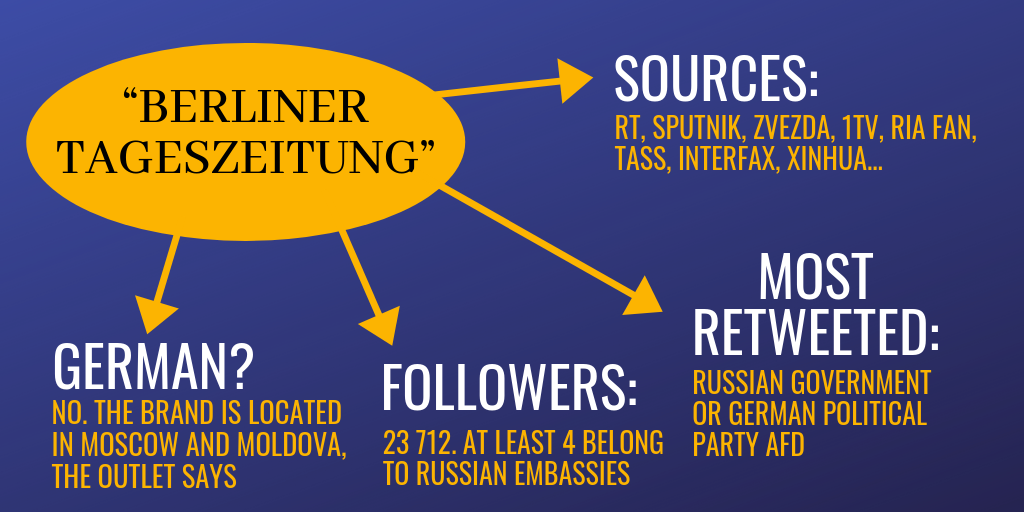 Berliner Tageszeitung – not to be confused with Berliner Zeitung or Tageszeitung (taz) – is a German-language online outlet which pretends to be a local news outlet in Berlin, Germany – at first glance.

When we take a more careful look at the outlet, it appears that the paper itself defines its editorial line as “determined by the owners of the outlet”, which are located in Tiraspol (Moldova) while the owner of the brand is located in Moscow, Russian Federation. 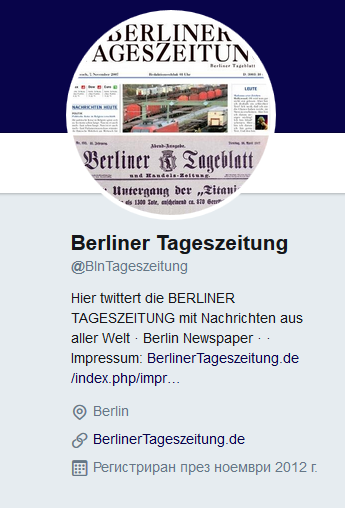 We analysed the account’s activities before the suspension. The outlet had close to 24,000 followers on Twitter. According to Twitonomy it tweeted about 65 times a day (more than, for example, leading online outlet Spiegel Online) and showed very low engagements by its community – about 90% of their tweets received neither a retweet nor a like.

Out of BTZ’s 24,000 followers, many were created around the same time, particularly between October 2013 and February 2014 and between January and November 2017.

Among the latest 3,200 tweets produced by @blntageszeitung, the most retweeted accounts either belong to the Russian Government or to a German political party (AfD). In at least one case the account shared  AfD-created election material with a focus on the European Elections. 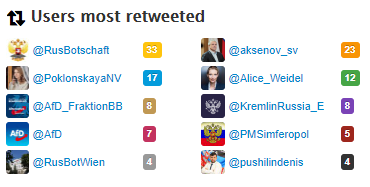 In at least one case information provided by BTZ has been quoted in Spain as coming from a genuine newspaper and opinion from Berlin, Germany. The article was widely spread and politicised in Catalan Twitter and accused Spain of having a justice system similar to a dictatorship.

What about the content then? What does BTZ inform its German speaking readers about? In just one article, it manages to repeat several recurring pro-Kremlin disinformation messages.

“Merkel is not planning to act against the massive influx of western-minded oligarchs, or the strongly increased presence of US “consultants” and the CIA. Politicians in Berlin, Brussels and Washington are happy to pay billions of taxpayers’ money for a Ukraine that serves the Western “community of defence” as an “extended arm” or “spearhead” directly at Russia’s border, without having to get their own hands dirty.”

“All of this is hidden behind the notorious excuse of defending democracy and human rights. At least this dirty power play should be put to an end. But is this even possible if you are upsetting the wrong people? The “Western value community” doesn’t even shy away from staging an attack, allegedly executed with Russian poison, and blaming it on the Russian Federation.

Germany being a vassal of the US, Ukraine being a vassal of Germany and the West being behind the Skripal poisoning: these are conspiracy theories and disinformation messages, which we have reported dozens of times in our database. See the debunks through the respective links.

BTZ is one more outlet which masquerades as a local news outlet and demonstrates a clear interest in pushing out pro-Kremlin disinformation messages.

Update, 31st of May 2019: Image updated to reflect the information on the outlet’s website.