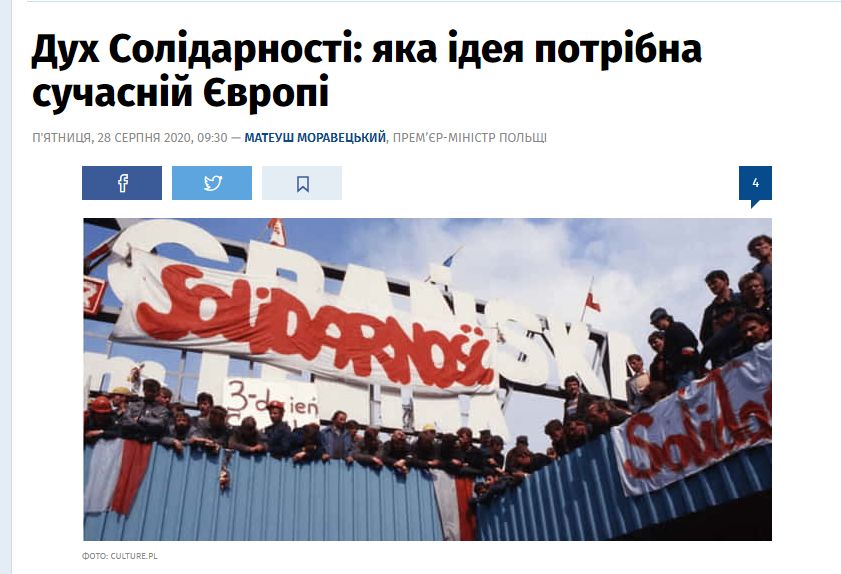 Polish Prime Minister Mateusz Morawiecki published a special article in foreign media for the 40th anniversary of the “Solidarity”. In Ukraine, it was published by one of the biggest portals “European Truth” (Yevropeyska Pravda).

Three days before the 40th anniversary of the creation of “Solidarity” movement, Ukrainian media published the translation of Polish PM Mateusz Morawiecki’s article “The spirit of Solidarity is necessary for today’s Europe” (in Ukraine it was published under the name Дух Солідарності: яка ідея потрібна сучасній Європі). The text appeared among others on one of the most popular portals on European issues “European Truth” (www.eurointegration.com.ua).

Polish PM points out in his article, that the relations between European states are shaped in accordance with the rule of solidarity, but Poland after the II World War was under communist government. After the war, Poland was also in catastrophic state – after losing 6 million of its citizens, half of whom were Polish citizens of Jewish origin. Despite of that tragedy and subordination, Poles were trying to regain their freedom for the whole post-war period. PM Morawiecki stated, that our citizens have never accepted “the unjust sentence of the history”. Although, all the attempts until the August 1980 were futile.

The breakthrough had place in 1980, when after the series of strikes in whole Poland, communist government had to consent to foundation of independent from the authorities, self-governed professional union. Mateusz Morawiecki underlined, that although formally it was a professional union, in fact it was a nationwide multimillion social movement. Prime Minister noticed, that the power of the Polses layed in the community full of faith, based on centuries of political tradition of love of freedom and democracy. The attachment to Europe was a part of it. Prime Minister also pointed out that its new inspiration and source was election of Karol Wojtyła for the Pope.

In his article Polish PM stated, that the solidarity ideals are and should be still alive and in this context he revoked famous John Paul II’s words: “There is no freedom without the solidarity”. Solidarity among people is visible in Poland during crisis, cataclysms, also during the current threat: coronavirus pandemic. However, the prime minister called also for making the solidarity “the content of everyday life, shown in kindness, hospitality, openness and forbearance”. According to the Polish politician, the spirit of solidarity cannot be limited to individual sphere and requires the community.

Morawiecki clearly stated that there is a need for strong Europe, as well as for strong Poland based on the spirit of solidarity. The “Solidarity” today is not only a piece of Polish history, but it should became a common European project for the next decades: “The relations between European states – regardless of their size and economic potential – should reflect the interpersonal relations. Those, naturally, are shaped based on the principle of solidarity”.

The Polish PM’s text was first published in Polish magazine “All the Most Important”. Abroad it was published, among others, in Italian “La Repubblica”. Link to the entire article in Ukrainian: https://www.eurointegration.com.ua/articles/2020/08/28/7113679/ and in Russian: https://www.eurointegration.com.ua/rus/articles/2020/08/28/7113679/