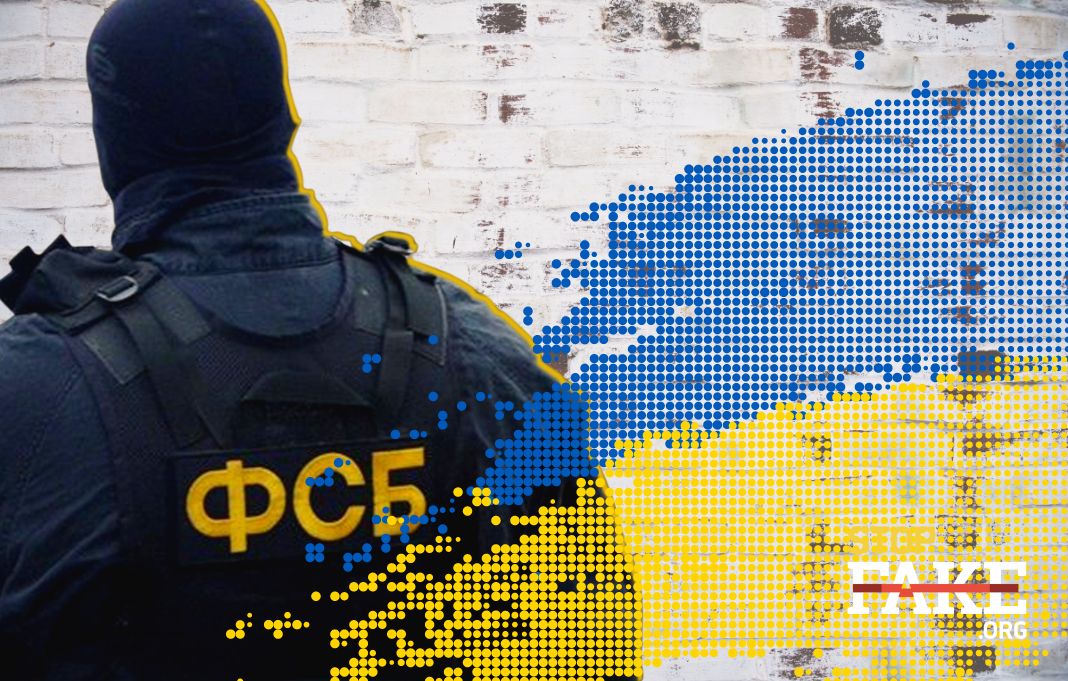 One year ago the Federal Security Service of the Russian Federation (the FSB) reported the detention of a group of “Ukrainian Nazi militants” in the Russian city of Voronezh. They – it was alleged – belonged to a group calling itself the Maniac Cult of Killers (the MKU) and were preparing terrorist attacks in Russian cities. The report led most Russian TV news broadcasts and many in Belarus.

“Russia`s FSB, in cooperation with the Ministry of Internal Affairs and the Investigative Committee of the Russian Federation, has in the city of Voronezh thwarted the activity of supporters of the Ukrainian radical youth group, the MKU, who engaged in the propagation of the ideology of neo-Nazism and mass murder.”

StopFake conducted its own investigation and found that the story about “Ukrainian Nazis” in Voronezh was an invention of the FSB. The detainees have nothing to do with Ukraine. On the contrary, they sympathized with Russian patriotic organizations and participated in rallies under imperial flags. They were detained for painting grafitti against Asian migrants on walls and fences. On the basis of this investigation Facebook labeled hundreds of messages, reports and articles in Russian media as “untrue.”

Three residents of Voronezh had indeed been detained on charges of extremism; however, all of them are citizens of the Russian Federation, belonged to a Russian nationalist organization and have nothing to do with Ukraine.

In Russia this story caused a storm of indignation. The media and Russian officials, however, were outraged not because the FSB had lied, but because Ukrainian fact checkers caught them in this lie. “How dare they question official information from a Russian state institution,” the Kremlin and the State Duma fumed. Social media which had exposed Russian disinformation were accused of censorship and threatened with fines.

And now, a year later, we decided to return to this story and see how it ended.  StopFake spoke again with the detainees, their friends and relatives and the investigator. Our conclusion that the FSB was behind the fake was, once again, confirmed.

For one, as of February 2022 everyone involved in the case of the “Voronezh UkroNazis” remained at liberty.  This included Aleksandr Simonov, the only one of the detainees who was held on remand, for several months. So: a year ago the FSB accused the three of preparing terrorist attacks on the instructions of the SBU [the Security Service of Ukraine], and now they are freely walking around Voronezh.

Secondly, the investigation ended and the accused were allowed to review their files. As we expected, there is no mention, much less evidence, of any links between the detained Voronezh residents and “Ukrainian Nazis” or Ukrainian intelligence services. The FSB did not even interrogate the suspects. The alleged “organizer” of this group, Aleksandr Simonov, told us:

“No, there is nothing like that in the accusation; actually, it contains not one single fact.  It`s a press release from the FSB, meant to denigrate us, to demonstrate what bastards they are detaining.  To show that, look, they almost ate children. But, in fact, all this is nothing but hallucinations born in their sick brain.”

That there is absolutely nothing about “Ukrainian Nazis” in the materials of this case was confirmed to us by another detainee, Roman Grebenshchikov. The investigators were not even interested in any connections he might have with any MKU.

“No, we weren’t pressed about this at all,” he told us.  “At least I wasn’t.  Nowhere during the interrogations was this mentioned, no questions were asked about this MKU. Nobody knows anything…. It`s not at all clear how this information ended up in the press, who leaked it.  Neither the investigator nor anyone else knows,” Grebenshchikov said in an interview with StopFake.

StopFake also talked to the investigator who was in charge of the Voronezh “Ukrainian Nazis” case. His name is Ilya Bichov.  We asked him why the materials before the Investigative Committee  contain no mention of a connection between the accused and the Ukrainian organization MKU [Maniac Cult of Killers]. His answer was quite telling. “And what is the MKU?” he asked the journalist, bewildered.

It’s  important to note: this case is before the Investigative Committee of the Russian Federation.  This agency never referred to the detainees as a cell of “Ukrainian Nazis.” The only ones to ascribe any Ukrainian ties of the Voronezh boys was the FSB.  In Simonov’s opinion, it was there, in the FSB,  that this wild story was concocted.

“Judging from what I saw, from who the detainees were,  it was all their work,” Simonov said. “That’s my opinion. Apparently, all the curators from the MKU sit here in our gray house and from here they message people who might fall for this kind of affair.  They use this as a kind of  lightning rod. Look what awful people they are. Most likely, they (members of the MKU) in fact  do not even exist  and there really isn’t anyone involved in such nonsense,” Simonov opined.

The blowback from the story about the fictitious “Ukrainian Nazis” did not stop the FSB. Even after their resounding failure in Voronezh, they stubbornly continued to “expose” members of the mythical organization MKU in other Russian cities. In Irkutsk, Tyumen, Anapa, Saratov, and dozens of other settlements – Russia’s Federal Security Service insisted – the MKU was preparing “to blow up government buildings and conduct armed attacks on citizens,”  as ordered by the SBU.

It is also very revealing how Russian media covered this case. They all as one published the FSB’s false press release. However, after StopFake proved that the case was fabricated, practically no one tried to check the FSB disinformation or to correct it. The detainees told us that only a couple of times journalists actually spoke with them. And they weren’t from Russian media. The results of detailed investigations appeared on the websites of the BBC and Radio Liberty. How strange: extremists, on the instructions of a foreign intelligence service, are preparing terrorist attacks in your country, but journalists show no interest in how the story plays out.

Against this background, we were even more surprised by the reaction of a few well-known journalists.  For some reason they rushed to defend the right of the Russian media to freely distribute fakes invented by the FSB. They were outraged that Facebook marked this information as unreliable. The RBC portal was also indignant about this characterization; after all, they had written an article based on an official FSB press release. Like, what do you want from us?

Facebook Blocked an RBC Article Based on an FSB Press Release

“The FSB claimed that supporters of Ukrainian radicals had been detained in Voronezh. Facebook blocked the article, basing  its decision on the conclusions of an expert from the Ukrainian site StopFake, who stated that the detainees were not connected with the neo-Nazis of Ukraine.”

And now the main question: why?  Why did the FSB fabricate this story? Obviously, we can only surmise, but we believe that at least a year ago Russia’s intelligence services began acting on Kremlin instructions to establish an artificial pretext for war against Ukraine. It was precisely for this reason that it was important to create the impression that there was an extensive underground network of extremist cells in various Russian cities directed by the SBU.  If necessary, the FSB would carry out actual terrorist attacks, blaming Kyiv. Russian public opinion would then most likely support “the justice of  aggression” against Ukraine.

In the case of the “Voronezh UkroNazis” the FSB acted very clumsily and carelessly. The fake fell apart,  the project never got off the ground.  Blowing up high-rise buildings in Russia in the name of a fictitious Ukrainian organization would be unconvincing and risky.  The FSB did, however,  through leaks to  the media, try to place blame for the explosion of a passenger bus in Voronezh on fictitious “Ukrainian Nazis.”

It was critically important that we saw this threat in time,  publicized it and were able to prepare for it.   We also understood that the threat of an overt attack by Russia against Ukraine had not passed, and this specific false flag operation to justify an open invasion was not the only one the Kremlin was working on.   As the events of recent months have shown, Moscow kept trying to create false pretexts, among them: “genocide of  Russians in the Donbas,”  “Ukrainian plans to use chemical weapons,”  “imminent Ukrainian attacks on Donetsk or Luhansk.”