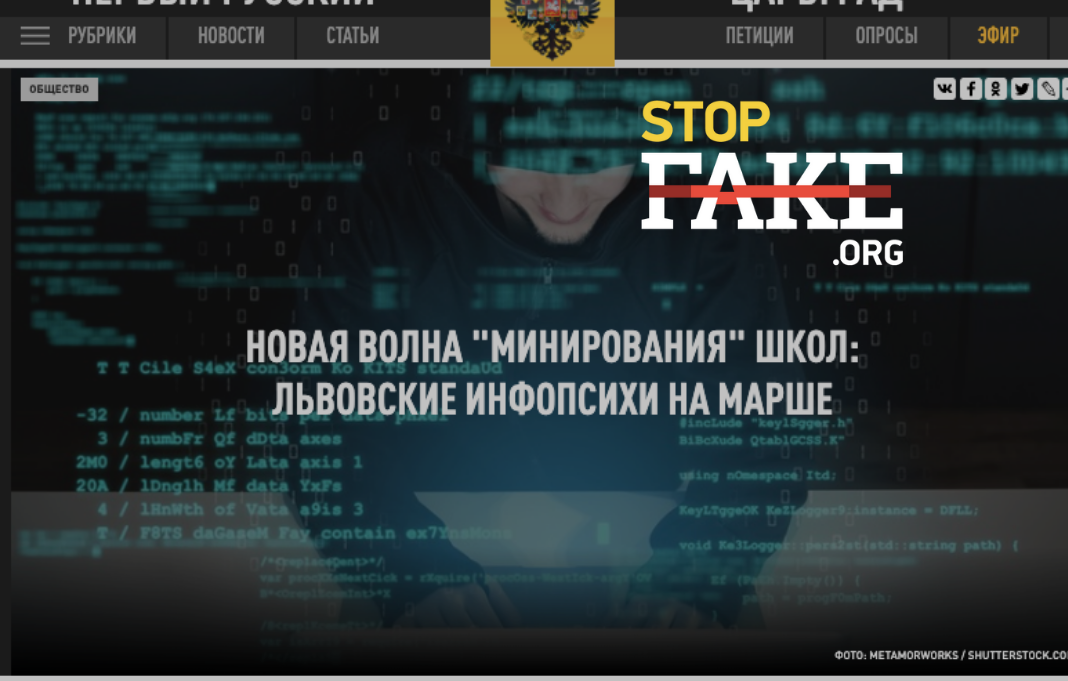 On the night of January 14, another cyber-attack occurred in Ukraine: hackers carried out a mass attacks on government websites, as well as the “Dia” government services site. ITC.ua, a leading IT users information resource writes that this is not the first such cyber-attack on Ukraine “and not even the most powerful.” According to Microsoft, Ukraine is one of the most hacked countries in the world, ranking second after the United States in the number of targeted attacks. This time, 70 government sites of various levels were attacked. Ukraine’s National Security and Defense Council points out that “today, the only country that can do this on such a scale is Russia.” Of course, Russia itself again pretends that “they are not there,” not building up troops on the Ukrainian borders, and not testing the strength of Ukraine’s cyber defenses.

According to folk wisdom, the one who shouts the loudest about theft is the one who has stolen something. Pro-Kremlin media remain true to this folk maxim. Commenting on the cyber-attack they almost unanimously say that while Russia will be blamed for this, ‘it looks like the whole thing was rigged by Ukrainians”. The website Regnum.ru cites anonymous Telegram accounts as “reliable” evidence of such claims. Using such comments as evidence, the Russian propaganda machine throws out its version of who organized the attack — Ukrainians themselves or “specialists from the other side of the pond”, bringing Petrov and Boshyrov into the mix, the Russian military intelligence (GRU) operatives (whose real names are Alexander Myshkin and Anatoliy Chepiga) who became notorious after the failed poisoning of former Russian agent Skripal in Salsbury, UK. Using ridicule, sarcasm and jokes to question the seriousness of the hacking, Russian media resort to “hahaganda,”one of the most deceptive instruments of disinformation.

REN TV claims that the US and Great Britain could have “secretly sent groups of hackers into Ukraine”. There is no secret operation in this case however, in light of Russian troop escalation on Ukraine’s borders and a potential cyber assault against Kyiv, the US and Britain did in fact send cyber experts to Ukraine last year, something that the publications Argumenty I Fakty and Eadaily duly noted.

Pro-Kremlin publications claim that Russia is not responsible for the attacks at least because the map of Ukraine the hackers installed on hacked sites includes “Russian Crimea”.

Anatoliy Shariy’s website Sharyi.net claims that since the hackers included a Ukrainian map with Crimea and used a capital letter in the pronoun you, this contradicts the general hostility of the message. Shariy is a pro-Kremlin blogger living in Europe.

Kremlin experts meanwhile are claiming that the cyber attack is just a ploy for Ukraine to stay in the news and prove that “Russia is threatening Ukraine”. All this is accompanied by the endless mantra by Moscow that “Russia is not going to attack Ukraine” and that “responsibility for events in Donbas should not be shifted onto Russia”.

Ukraina.ru in particular claims that the cyber attack on Ukraine has a nefarious subtext, the Ukrainian government is using it to continue positioning itself as a victim and distract people’s attention from the administrations failures in the energy sphere.

When a full-fledged economic crisis sets in (and everything is going in this direction) when industry shuts down and bread and other foodstuffs disappear, it will not be possible to blame everything on Kremlin agents, Ukraina.ru predicts apocalyptically. The site calls the hacking “the fruit of Ukraine’s Washington curators, who desperately need to increase the level of accusations against Russia.”

Ukraine is also being blamed for an increase in bomb threats in schools, courts and shopping malls in neighboring Russia and in Ukraine. Such threats contribute to economic turmoil and social unease and recently the number of such threats has significantly increased. The propagandist publication Tsargrad conducted an entire so-called investigation which consisted of anonymous sources blaming “information psychopaths from Lviv” for these threats, claiming that Ukrainian military special operations units were behind the bomb threats.

Tsargrad writes: “Enough enduring such outrage. We must answer. Answer them not directly not in the head, but head on, asymmetrically. We have other more serious and powerful means and methods against such information psychopaths. And we also have special forces, they already showed in February 2014 what they are capable of. In Crimea.”

The more actively Russia tries to absolve itself of responsibility for everything that is currently happening, the more clearly the situation resembles the events of 2014 and 2015. At that time, Putin also categorically avowed that they were not going to “wave explosives” in Crimea, and after the start of the war in Donbas, Putin coined the expression “they are not there,” claiming that there were no Russian troops in Ukraine.