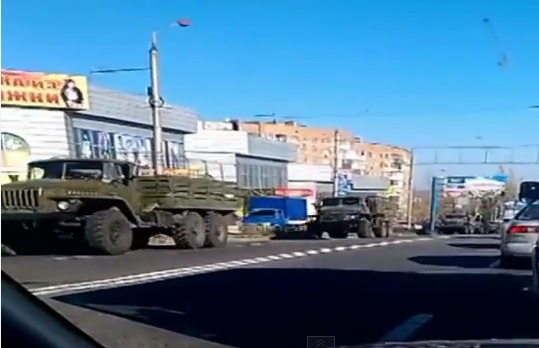 First of all, the city in the video is Makeevka of Donetsk Region, not Donetsk, precise place is 250 years of Donbas Av.  Video clearly shows shops ‘Clothes from Customs’ and ‘Samsung’.  Social network users report these are situated on 3a 250 years of Donbas Av.  As it is known, Makeevka is controlled by the so-called DPR, which makes movement of Ukrainian armoured vehicles through it impossible.

Also, the video appeared earlier titled “Makeevka — convoy of Grads of DPR terrorists (30.10.14)”.  It was published by a number of Ukrainian websites.

The video description states: “An eyewitness in Makeevka has filmed ‘Grads’ which belong to the gunmen moving to their combat positions.  The convoy includes 8 ‘Urals’ which seem to transport shells and 11 ‘Grads’.  The convoy is escorted by some trucks and cars with gunmen. All vehicles look brand news, have fresh paint and jackets of ‘Grads’ are clean.  This can suggest the gunmen are receiving help from the Russian Federation.”