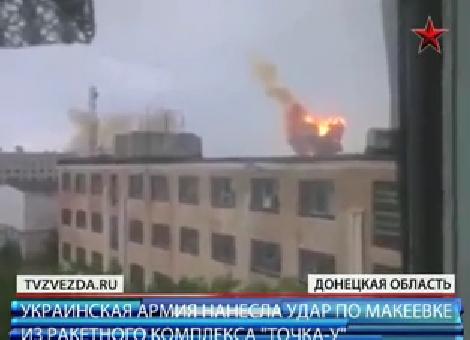 A number of Ukrainian and Russian websites spread the information about the Makeyevka, Donetsk region shelling, using this fake video.

On August 20, two Ukrainian TV channels reported that Makeyevka was fired by separatists.

Ukraine TV channel in the Events:

Inter TV channel in the Details:

This story was also published on the website of the channel.

“Ukrainian army stroked Makeyevka by Tochka-U rocket complex.  Precision-guided munitions were released under the supervision of Ukrainian military leaders.  Without having digital maps, talking about the selective defeat of the targets is impossible,” says the voiceover.

Actually, the demonstrated video is a fake.

Here is the original recording, which was used by all channels:

Although the video is named “Proton-M rocket crash”, it was published on YouTube only on August, 19 of this year, so distrustful users can not believe this.  However, a comparison of fire and clouds of gas that rise after the explosion in this video and on the other – which was filmed on July, 2, 2013 – shows that it is one and the same event.