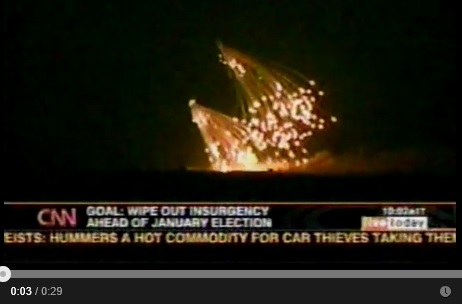 There is a video, actively spreading on the Net, allegedly showing the Ukrainian army bombarding Semenovka village (near the city of Sloviansk, Donetsk region), using incendiary shells.

“They were exploding at low height, coming apart as multiple burning parts. There were a number of fires in the village, as a result. Supposedly, the military was using the so-called ‘phosphorous bombs’. Their use in residential areas is prohibited by a number of international treaties,” wrote the YouTube user who had uploaded the video.

The video contains footage of American bombardment during the Second Battle for Fallujah (8 Nov – 20 Nov, 2004), Operation “Phantom Fury”. The operation was undertaken to stop the escalation of violence in Iraq, and to facilitate the presidential elections of January 25, 2005.

In the beginning, the American high command was saying that phosphorous lighting bombs had been improperly used; they were calling the reports of victims a “wildly spread myth”. Later, under the pressure of journalists (who demonstrated photos of children and adults with burns, characteristic of white phosphorous), Pentagon representative, Colonel Barry Venable, acknowledged that the American army had purposefully used white phosphorous against an “armed enemy”.