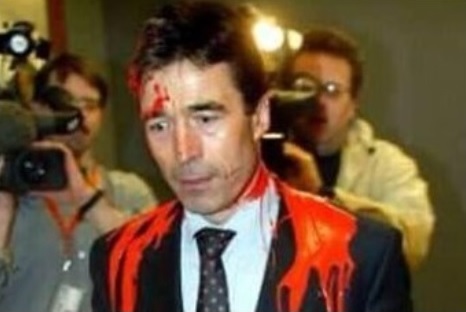 Several web-sites wrote about this video. And this event was presented as an event that took place just on June 5, 2014. This information was widely spread throughout social networks as well.

However, this video was filmed as far back as March 18, 2003. Then Rasmussen still was the Prime Minister of Denmark. He was spilled with the red paint by an activist of the movement against the war in Iraq. In such way the activist voiced protest to the Danish government, which supported the war plans of the USA. This happened in Copenhagen, just in the building of the state parliament. Spilling paint on Rasmussen, the activist shouted: “You have blood on your hands”.

This very video was also used for creation of a faked news on August 27, 2011. Then it appeared again in Youtube under the title “Rasmussen paid for the genocide in Libya”. At that moment he was already the Secretary General of NATO and this organization was conducting active military operation in Libya.