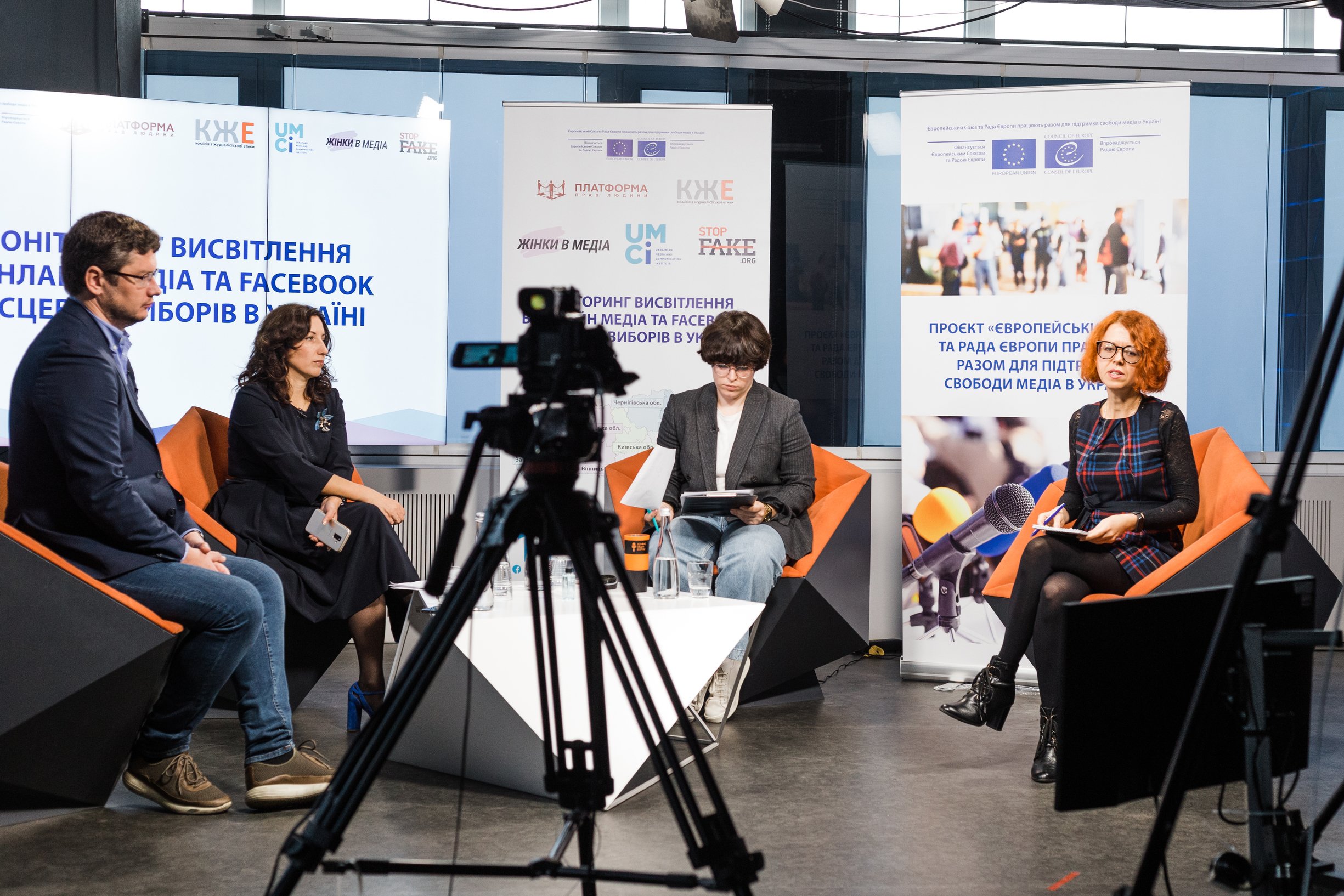 On October 8, 2020, the online presentation of the interim results of two monitoring activities of media coverage of the 2020 local elections in Ukraine was held.

Experts have concluded that the topic of elections is not top in the local online media, the media do not follow gender balance, and some of them continue to voice the Kremlin’s rhetoric. As for Facebook, not only local teams and candidates for the position of mayor but also brands and messages of parties at the national level are competing.

The first monitoring is conducted by a coalition of CSOs with the support of the project “EU and Council of Europe working together to support freedom of media in Ukraine”. Experts analyze the topics and tone of news, gender aspect; quality of media materials, and their compliance with electoral legislation in 12 regions. The team also analyzes the content of the Facebook pages of the 10 most rated parties at the national level and their leaders, as well as the top 3 candidates for mayor and top 5 parties at the local level in these 12 regions.

The second monitoring is carried out by the CSO “Detector Media”, which during the electoral period followed Russian and pro-Russian disinformation narratives in the national media and in the media landscape of eight Eastern and Southern regions.

Olena Lytvynenko, Deputy Head of the Council of Europe Office in Ukraine, noted the effective work of the coalition of CSOs that implements monitoring and mentioned that the main goal of monitoring is to promote more fair and impartial media coverage of the elections.

“It is important to follow the key principles of media during elections, which are enshrined in the Recommendation of the Committee of Ministers CM/REC (2007)15 on measures to cover election campaigns in the media. The main principles are non-interference by public authorities in the activities of media professionals with the intention of influencing elections, providing protection against attacks, intimidation, and other forms of illegal pressure on the media. Ensuring editorial independence and adherence to professional and ethical standards are critical during the election campaign. The legal framework or mechanisms of self-regulation should ensure that the media, when publishing the results of public opinion polls, provide the public with sufficient information to assess the quality of the poll,” Olena Lytvynenko said.

Thus, the first monitoring showed that the top-3 topics the media cover in their news are topics with a negative connotation. In the first place – the topic of COVID-19 (14.37% of all news), in the second — disasters, incidents, and accidents (12.71%), in the third — crime (11.93%). The topic “Elections” is at the seventh place in the list of other topics.

“This media monitoring once again demonstrates the existence of a big number of problems in our regional media. And it is not just about paid materials – “jeansa” (although it’s a shame). It is, first of all, about the agenda that is set by the online media in the field. And this agenda is far from reality. We also see that there are no analytical and educational materials, all is generalized to breaking news with clickbait headlines. How should the citizens who have the right to vote get information for making important decisions? This agenda needs to be changed. Otherwise, one day, after the other election, we can wake up in a completely different country,” Diana Dutsyk, Council of Europe expert, and executive director of the Ukrainian Institute of Media and Communication, pointed out.

Regarding the presence of possible external informatOlha Yurkova,ion influences in the local online media, Olha Yurkova, Council of Europe expert and co-founder of the StopFake project, identified several trends:

“The rhetoric of most major local parties on Facebook is more likely to prepare for the parliamentary elections than a political struggle at the local level. Instead, local level parties hardly touch on “central” topics. Most parties and their leaders tried to discredit their opponents and used abusive language and sometimes hate speech against certain sections of the population. None of the parties provided educational information to voters on how to make the informed choices,” Olha Yurkova said.

In Ukraine, as of September 2020, there is no special regulation of online media, video, and information-sharing platforms (social networks), including during elections. However, despite these gaps in the legislation on the regulation of online media and social networks during the electoral process, in the reporting period, there were two systemic types of violations. The first is hidden campaigning, as well as the placement or dissemination of campaigning materials not marked in accordance with the requirements of this Electoral Code. The second violation is the dissemination of election-related opinion polls without specifying who commissioned them and/or other mandatory data, Oleksandr Burmahin, Council of Europe expert, Executive director of the Human Rights Platform pointed out.

The monitoring was conducted by the coalition of civil society organizations consisting of the Journalism Ethics Commission, “Human Rights Platform”, “Ukrainian Institute of Media and Communication”, “Stop Fake (Ukraine)” and association “Women in Media” with support of «EU and Council of Europe working together to support freedom of media in Ukraine» during the period of 5 September – 25 October 2020, covering the content of the social network Facebook and local socio-political online media with the biggest audience in 12 regions of Ukraine, including Zakarpattia, Rivne, Chernivtsi, Lviv, Volyn, Chernihiv, Sumy, Zhytomyr, Vinnytsia and Kyiv regions as well as government controlled areas of Donetsk and Luhansk regions.

The project «EU and Council of Europe working together to support freedom of media in Ukraine», funded by the EU and CoE, aims to enhance the role of media, its freedom and safety.