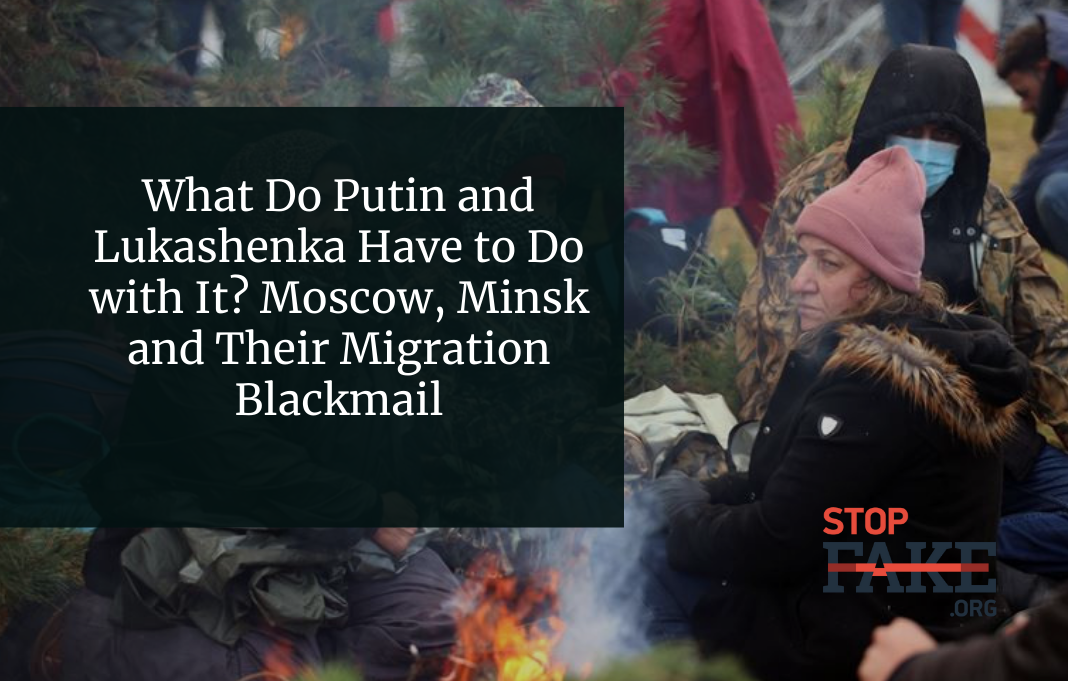 Moscow, Minsk and Their Migration Blackmail

The situation with migrants crossing over from Belarus into Poland could have turned into a case Belarus blackmailing the EU this past summer, it did not, but in the past few weeks the situation has become particularly heated. Belarusian state media and their sponsors, the Russian propaganda machine are blaming the West for this crisis, using their traditional narratives of western provocation and escalation. This time Ukraine also got caught in the crossfire, Belarusian President Alexander Lukashenka accused Ukraine of organizing the transit of migrants into Belarus and further to the Polish border. “This is how these Afghans go, through the Central Asian republics, through Russia, through Belarus and further. And they also go through Ukraine, but Ukraine is “their own” (the West’s own, ed.) so they keep quiet about that. Belarus is a stranger, so it gets trashed” Lukashenka said in an interview with the Russian defense publication National Defense.

However, based on our StopFake fact checkers’ analysis of the information on the migrant crisis coming out of Belarus and Russia, it is not the West and Ukraine but rather Moscow and Minsk that have unleashed a campaign to force the West to cooperate with the Lukashenka regime, which after the violent crackdown of 2020 did not even merit a handshake from the West. And Russia, true to form, sells its services to resolve the problem that Moscow itself created.

The situation on the Belarusian with the EU members Poland and Lithuania began to heat up this summer after the Belarusian authorities kidnapped journalist Roman Protasevich by intercepting a Ryanair flight. After a wave of criticism was directed at the leader of the Belarusian regime, Alexander Lukashenko threatened Europe with an uncontrolled flow of migrants and smugglers, whom, he implied, Belarus had been holding back all this time, worrying about western borders. Soon thereafter Belarus announced its withdrawal from the readmission agreement, which involved returning illegal immigrants to their country of origin or to a country of transit.

“We want to warn the Polish side in advance against using any provocations directed against the Republic of Belarus to justify possible illegal military actions against disadvantaged unarmed people, among whom there are many women and underage children,” the Belarusian Foreign Ministry said.

The situation on the Belarusian-Polish border is critical. According to various sources there are several thousand migrants on the border with Poland, they are accompanied by armed Belarusian security forces, several hundred more are at the Belarusian-Lithuanian border.

In his National Defense interview Lukashenka said the transit of these refugees was organized by accomplices from the West and from Belarus, and the situation in Belarus is just one stage of the transit scheme.

It is interesting to note that in this same interview Lukashenka repeats Moscow’s messaging about how the West destroyed Middle East regimes word for word. “After all, all this happened in front of my very eyes” Lukashenka told the pro-Kremlin Igor Korotchenko of National Defense. Lukashenko recalled that he knew many of the Middle East dictators, Hafez Assad, Saddam Hussein, Muammar Gaddafi. ““We were in very close, good relations with them. We met with them. I’ll tell you – the greatest thinkers. These are people who, by virtue of their position, understood very well what was happening. These were the leaders in their states. And these scoundrels just killed them. They killed them” Lukashenka said.

Belarusian state television sets the tone for the coverage of this crisis, but Russian media are not lagging far behind. Belarusian state channels Belarus 1 and Belarus 24 claim that the migrant groups are mainly Kurds and Yazidis, people who do not have a state of their own and who are fleeing the chaos that the West has unleashed. The West is accused of provoking and aggravating the situation, and of a fascist approach to resolving the conflict.

The Belarus 1 state channel interviewed a certain Piotr Petrovsky who said that Poland was mobilizing too many security forces in response to the flow of migrants. “The situation on the border is very tense, we see an escalation on the part of Poland, the use of a maximum number of security troops, moreover those security troops who are not suitable for working with civilians,” Petrovsky told Belarus 1.

Neither Petrovsky nor his colleagues mention the fact that armed people accompany the migrants towards the Polish border across Belarus. Polish border guards published the evidence: video footage of Belarusian security forces directing a column of refugees to the Polish border at gunpoint.

“He (Putin – ed.) wants to use Lukashenka in the same way he uses puppet governments in the occupied territories of Ukraine, Georgia and Moldova. He demands that the governments of these countries negotiate with the separatists, with people whom many call terrorists. He demands that Europe conduct a dialogue with the illegitimate president,” said Lithuanian Foreign Minister Gabrielus Landsbergis.

Poland and Lithuania are calling Belarus’ actions blackmail, staged by Moscow. Judging by the messages disseminated by pro-Kremlin media, this fully reflects the intentions of Moscow and Minsk.

“To resolve the situation, the Belarusian authorities are insisting on a direct and equal dialogue with the EU, which would be de-facto recognition of the Belarusian leadership by the European Union,” writes Rusbalt.

Announcing Minsk’s alleged readiness to negotiate the refugee issue with the EU on state television, Belarusian political commentator Alexander Shpakovsky lay the blame for the situation on the West, portraying Belarus as completely innocent of any manipulation of the situation.

Judging by the humanitarian crisis that the migrant situation is quickly turning into because of Belarus’ blackmail, Minsk’s declarations of willingness to negotiate look increasingly like coercion. By accusing Poland and Lithuania of fascism, Minsk is attempting to get out of the sanctions the West has imposed and the international isolation that the country is in because of Alexander Lukashenka’s presidential election falsification and the massive repressions unleashed against the opposition that challenged those falsified election results. Which means that despite all propagandist attempts to portray the sanctions regime as ineffective, the sanctions are in fact an effective method of pressure on this regime.