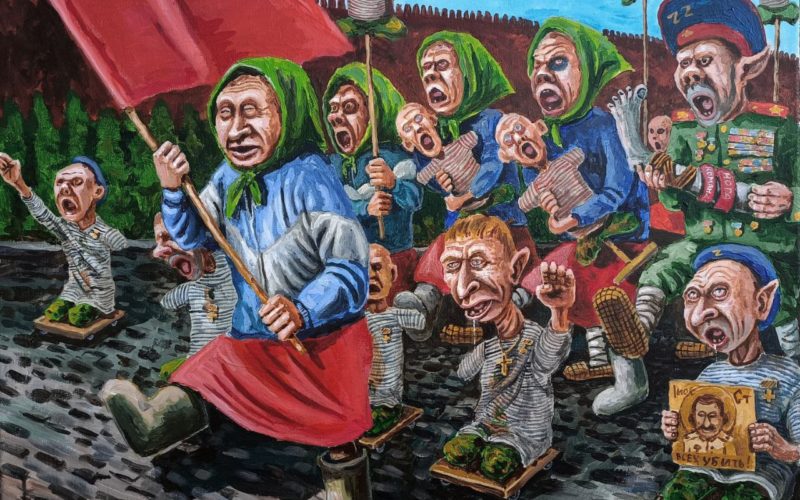 By The Centre for Strategic Communication

Russian leadership’s love for symbols is no secret — they usually align their activities with significant dates to later report on these achievements. They are generally guided by the principle “whatever you call victory will be the victory.”

For this reason, on May 9, everyone expected Putin to make a big statement on some newfound victories. But there was nothing new or particularly interesting about the Russian leader’s speech.

The Centre for Strategic Communication analysed whether Russia was able to achieve what Putin had intended before the war with Ukraine, and whether he has any achievements to show off in the first place.

One of the memes born of the new stage of the Russo-Ukrainian war is the phrase: “Russia doesn’t like our history textbook? It’ll like the new one even less.”

Indeed. It seems like Putin’s full-scale invasion led to the exact opposite of what he wanted.

Last year, Moscow became very concerned about NATO. The Kremlin suddenly realized that in the past twenty-five years, the “aggressive bloc” had come uncomfortably close to Russia’s borders. Putin believes that Brussels actually had to ask Russia for permission before any countries could join NATO. Somehow, it did not.

In December, Russia’s MFA unveiled draft agreements with NATO and the United States, which turned out to be ultimatums to the West before “fighting the West” in Ukraine. Putin demanded “security guarantees”: a moratorium on NATO expansion and reduction of the Alliance’s military presence in the countries gaining membership after 1997.

What did they get instead after their invasion on February 24? Previously neutral Sweden and Finland are rapidly moving towards NATO membership. The latter will expand the Russia-NATO border by more than 1,000 km.

We see the same thing happening as in 2013, when Russia tried to stop Ukraine from signing the Ukraine-EU Association Agreement. But the Maidan, the occupation of Crimea and the hybrid aggression in the Donbas have only accelerated the process of creating a free trade zone with the European Union.

The full-scale invasion has given new impetus to Ukraine’s European integration. It was literally on May 9 that Ukraine announced it had filled out the second part of the questionnaire to gain EU candidate status.

Russia also insisted on curtailing Ukraine’s military cooperation with the West, and identified so-called “demilitarization” as one of the goals of the “special operation.” But the West did not leave Ukraine alone with the aggressor, and began to supply it with some of the newest weapons.

As a result, the unique experience and weapons gained from around the world can make Ukraine the greatest military power on the European continent, if it has not happened yet. And the lend-lease programme approved by the US Congress will not just dramatically improve Ukraine’s defence capability, but also clearly show who is who in today’s world in parallel with WW2.

If Moscow insisted on Ukraine never joining NATO, our country will soon use NATO standards and become strong enough that it won’t even need American military bases on its territory, so feared by the Russians.

Meanwhile, Russia is primarily demilitarizing itself.

A pole of power?

In Moscow, they loved talking about the end of the global domination of the US and a new multipolar world, clearly imagining they would be one of the “poles.” But instead of strengthening Russia’s position on the international arena, its invasion into Ukraine has led to Russia’s unprecedented international isolation. Sanctions are in effect, and Russia is on the brink of default.

Russia’s reputation suffered a lot of damage, even in sectors where it considered itself outstanding. Experts predicting Ukraine’s imminent defeat and mere hours of its defence capability were shocked by the weakness of the Russian army. It turned out that Russia did not have great military leaders any more, Russian soldiers were helpless and suffered from low morale, and bad logistics and health care in the military may have killed just as many Russian soldiers as the Armed Forces of Ukraine did.

The Russian generals also arranged for convincing bad PR for its military industry, which made money on contracts with India, Iran, Azerbaijan, Algeria etc. for years. These countries are now probably more interested in weapons that showed better results in Ukraine.

Russian soldiers came to Ukraine under the pretext of saving “the people of the Donbas” from genocide. Nobody in the world had fallen for this rhetoric even before. However, the facts of the genocide will now be considered by international tribunals. Genocide committed by Moscow, not Kyiv. It has become clear that it is Russia, not Ukraine, that needs comprehensive denazification.

The Kremlin stubbornly calls the legitimate Ukrainian government the “Kyiv regime” and never fails to mention the so-called “coup d’état” of 2014. They conveniently ignore the fact that since then, four elections for central authorities have taken place in Ukraine, which really changed the political landscape of the country. In Russia, for example, power has never changed democratically.

People have probably already forgotten that in February, Putin and his accomplices openly called for the overthrow of President Zelenskyy and were preparing a replacement for him. Once again, the effect was the opposite: Russia’s big invasion has consolidated Ukrainian society. The political opposition, which has so far harshly criticized the government, has backed the president in the face of an existential threat.

What is more, Zelenskyy is now famous worldwide as the leader of Ukrainian resistance. We will diplomatically refrain from describing the current image of the Putin regime, which unjustifiably started the war and the genocide.

Ukrainian society not only supported its government, it became more internally cohesive. There is no target audience for Putin in Ukraine any more. In the occupied southern and eastern regions, where that “Russian-speaking population” lives that he cares about so much, the invaders were unable to create not only an effective administration of traitors, but even its semblance for propaganda. They just failed to establish new “people’s republics,” and the previously announced pseudo-referendum ended up being postponed.

We have already briefly mentioned the military “achievements.” During more than two months, Russian troops have been unable to capture Kyiv or any regional centre except Kherson. In Kyiv, Chernihiv, and Sumy oblasts, the defeated enemy had to run from Ukrainian defenders under the pretence of a “dramatic reduction of military activity” in these areas.

Meanwhile, the losses among Russian Armed Forces have already exceeded the figures for Chechen and Afghan wars, which went on for years, even during this brief period. Russia is losing not only people and equipment in this war, but also its symbols, such as the flagship of the Black See Fleet, the missile cruiser Moskva.

“Everything is going according to plan”

When it became clear that the main goal of the invasion (change of administration in Ukraine) had failed, the Russians began to look for other more mundane and achievable goals, which, if attained, would give grounds to claim victory. In the end, whatever happens, we already know that “everything is going according to plan.”

Considering the change of the strategic situation and the rhetoric, the new goals are to capture the previously free territories of Donetsk and Luhansk oblasts which have been announced by Putin to be parts of the so-called “DPR” and “LPR.” The idea was to complete a grand encirclement of Ukrainian forces in the east and creating a corridor to Transnistria, or at least to fully capture Mariupol.

Around the end of March, the deadline for the victorious completion of the “special operation” emerged: the Victory Day, May 9. Even on a smaller scale, the current master of the Kremlin cannot let go of Stalin’s glory.

May 9th came, but the victory never did. Kharkiv, Kramatorsk, and Sievierodonetsk are firmly in Ukrainian hands. Even the Mariupol garrison, buried by the propagandists over and over, gave a press conference the day before.

The main symbol of the Russian propaganda, the old woman with a red flag, failed as well. Her image has already been reproduced and immortalized in murals and sculptures. But suddenly the prototype “came to life” and unequivocally expressed her attitude to the pseudo-liberators. It would be the same if the bronze Soviet soldier from Treptower Park suddenly escaped and ran to the American occupation zone 70 years ago.

Starting his adventure in Ukraine, Putin brought Russia to the brink of economic, social and military catastrophe. If the Kremlin hoped for a repeat of the spring of 2014 and a new “Crimean consensus,” this time it made a big mistake. There is no way to get out of this situation with dignity or minimal losses. What will follow is either a shameful flight from Ukraine, or a war until the full exhaustion and disintegration of Russia.

That is why the atmosphere of this year’s parade in Moscow was so gloomy. Putin’s gestures, facial expressions, and behaviour expressed confusion. What he said showed despair. From a high rostrum, the dictator looked at his troops, damaged after the fights in Ukraine. Perhaps he was wondering whether these soldiers would protect him in the Führerbunker, surrounded by the Ukrainian “Nazis”?

By The Centre for Strategic Communication

The Kremlin’s Warmongering Rhetoric At The Point Of No Return