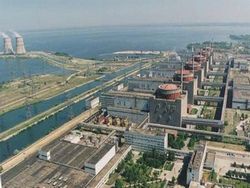 Website Segodnia.ru released news (June 14) that personnel of Zaporizhia’s Nuclear Power Plant, power block two, are supposedly not being allowed to go to work – the reason for this is American military takeover of that power block. This info was, allegedly, gathered by Segodnia.ru journalists from that power plant’s employee.

The news spread across other portals and social media sites.

Zaporizhia’s Nuclear Power Plant’s official website denies the takeover of power block two: “The given information does not correspond with reality; it is false and provocative. This is yet another attempt by mass media to destabilize the situation in Ukraine. The industrial zone of Zaporizhia’s Nuclear Power Plant is securely guarded by Ukrainian Ministry of Internal Affairs forces. Regulated areas and sites (which facilitate plant security), and the entire perimeter of the high-security area (where work with nuclear materials is performed), are protected by an alarm system, and are controlled by a military operator or the plant’s operational personnel. Access is granted to these areas only by special authorization.”