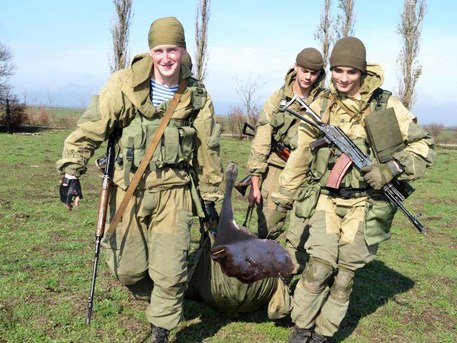 A doctored photo of Ukrainian servicemen allegedly transporting a stolen animal was spread on social networks and blogs.

The photo initially appeared on June 20 on the website of the Russian channel Zvezda. It gave Svodki ot opolchenia Novorossii as the source, which stated that Ukrainian servicemen had allegedly stolen cattle from the inhabitants of the so-called “Luhansk People’s Republic.” Later the falsified photo was removed from the site and from Zvezda’s social networks, but remained in the cache on the page of Vkontakte.

Dumskaya published the original, uncompromised photo of four Ukrainian servicemen in October 2014. It had been taken in the Odesa region, where cadets from the local military academy were training in carrying fellow soldiers and equipment.