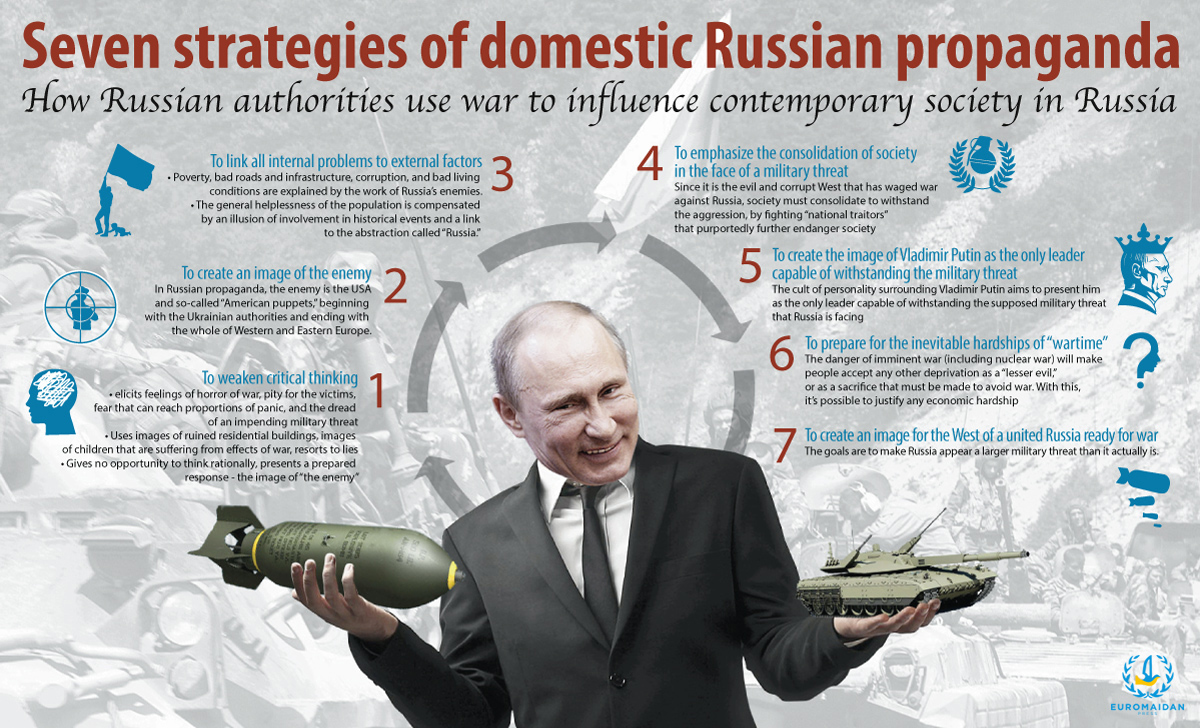 The Russian propaganda machine produces endless streams of fakes and manipulative stories. While at times they may seem outrageous or silly, they are far from being random. Russian propaganda for both domestic and foreign audiences follows techniques that stem from Goebbel’s times. Ultimately, it is a weapon of war. In our series A guide to Russian propaganda, we examine how propaganda works, and how one can avoid falling for it.

In our first series, Propaganda prepares Russia for war, we use Kseniya Kirillova‘s classification of strategies of Russian propaganda for Russians, and illustrate it with disinformation episodes gathered by EU Stratcom’s Disinformation Review (we would like to thank Oleksandr Nykonorov, Pavlo Spirin, East StratCom Network, StopFake, and others for their excellent work in monitoring Kremlin disinformation.)

Russian propaganda for Russians has a very different tone than the stuff the Russian state serves up to foreigners. This is partially because they serve very different purposes. The Russian state lacks the ability to coerce foreign populations (well, outside of occupied territories) and therefore propaganda is mainly a tool of division. Russia tries to persuade western audiences about Russia’s reasonableness, create grassroots or even political lobbies for pro-Russian positions, or sometimes just confuse people and muddy the waters about key issues.

Russia’s rulers use propaganda in Russian to direct their populace, squash dissent, and instruct them in the core political beliefs that Russia’s rulers find most useful. One of most useful ideas they push on their populace is a particular Russian form of anti-Americanism. The use of anti-Americanism may be partly the result of Cold War propaganda, but even if the Russian people totally forgot their Soviet indoctrination, Russia’s current rulers would probably use the same idea. As America is the most powerful nation on earth with a tremendous amount of cultural influence, it is the perfect candidate for the role of the villain in paranoid nationalist propaganda. Below are examples of propaganda and an explanation of the role they play in influencing the Russian population.