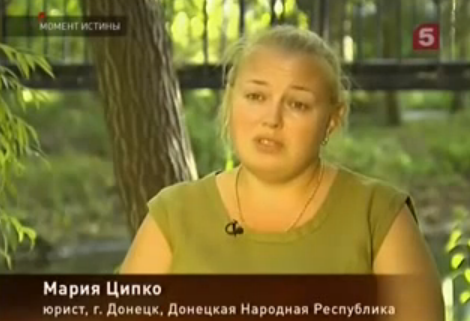 Maria Tsypko, a famous supporter of Donetsk and Luhansk separatists, who appears regularly on Russian TV channels with the most extraordinary stories and plays every time a different role, testified “atrocities” of the Ukrainian army.

For this time, Tsypko called herself a lawyer from Donetsk. Appearing in the program “The moment of truth” on Russian Channel 5, she told about the family of a citizen soldier nicknamed “Lynx” that was shot by Ukrainian militants in Kramatorsk city in Donetsk Region.

According to her words, the execution was carried out publicly in the city center, and was aimed at intimidating the locals and making them fink on citizen soldiers.

“The moment of truth” went on the air on August 4. The Ukrainian army entered Kramatorsk on July 5. Thus during the whole month there were no reports about a public execution in the city center, which compelled a lot of attention, either in media or in social networks. This fact indicates that this information is quite doubtful.

Besides, it resembled the similar news item of Russian Channel One, where a woman told about an alleged public crucifixion of a 3-years old child in Sloviansk. This information also appeared to be journalists’ fiction.

Let’s recall that previously Tsypko had repeatedly appeared in many Ukrainian cities as a local resident, a victim or a witness of Ukrainian soldiers’ “atrocities”. On May 11, she even appeared to be a “referendum coordinator” in Moscow of self-determination of Donetsk and Luhansk People’s Republic.

At the end of June, she proclaimed herself a victim of Odesa tragedy in the Trade Unions Building on May 2 and told about this fact to TV channel Russia-24.