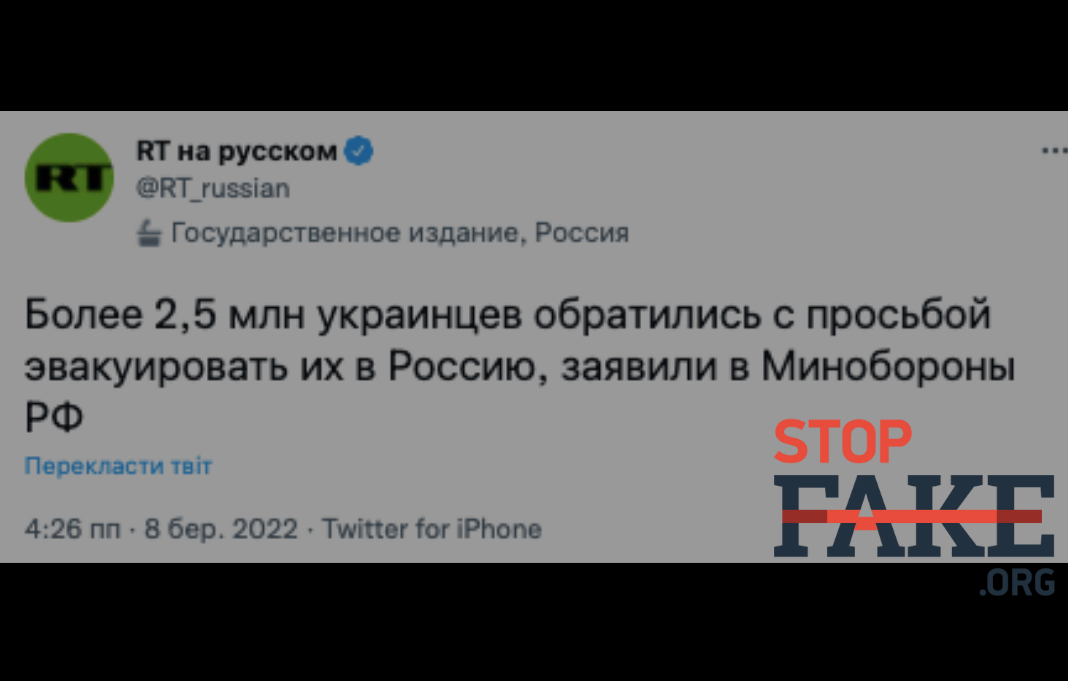 According to the UN High Commissioner for Refugees, some Ukrainians are evacuating to Russia but not in the high numbers that Russian media claim. Since the Russian war began some 99,300 Ukrainians left for Russia (5% of the total number of Ukrainians who left the country because of the war). According to the UN, most Ukrainians go to the European Union.

Russia’s Defense Ministry continued to disseminate inaccurate information about Ukraine. This time it is claiming that 2,5 million Ukrainians have asked to be evacuated to Russia. Neither the Ministry nor the media that are parroting this information provide any explanation as to on what basis such a claim is being made. Russia’s Defense Ministry claims it has a list of these applicants but will not share it with Ukrainians because it fears there will be reprisals against them from Ukrainian authorities.

Russian media are trying to create the impression that Ukrainians are seeking the help of the Russian military, as they flee Ukraine for Russia seeking residence permits and Russian citizenship. These attempts are so obviously staged, in the video embedded in the Izvestia version of this fake, one can hear an off camera command telling the family being filmed when to start walking. Claims of such evacuations sound even more cynical against the backdrop of constant Russian shelling  of civilian targets who are trying to reach safety through these humanitarian corridors.

Local news sites confirm that some residents from the occupied territories are indeed leaving for Russia, but certainly not as many as the self-proclaimed Donets and Luhansk People’s Republics claim.

Data on refugees from Ukraine is constantly updated by the office of the UN High Commissioner for refugees. According to their data from February 24  to March 8, 2022 about 99,300 Ukrainians left for the Russian Federation. In total about 2 million people left the country as a result of Russia’s war, with the vast majority of people going to Poland and from there to other European countries.