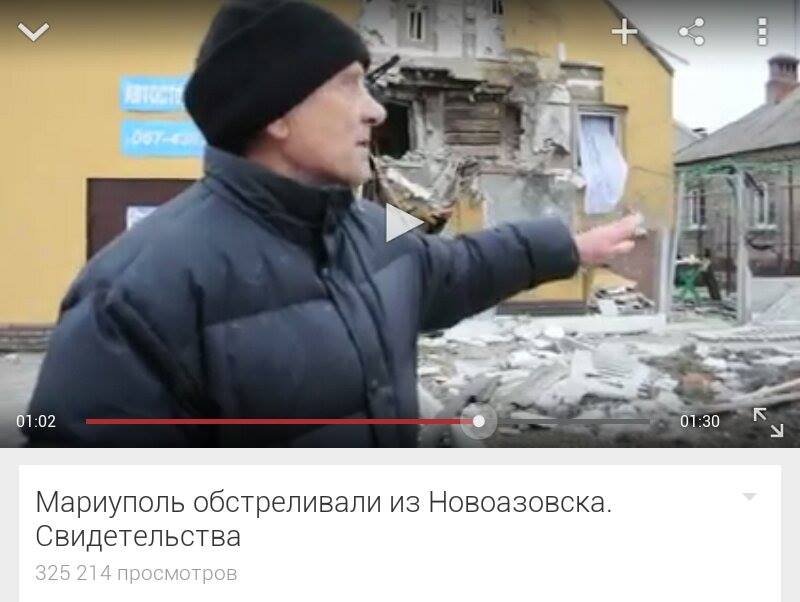 Pro-Russian users of social networks claims that the city of Mariupol was shelled on January 24 by the Ukrainian troops, but not by separatists as experts of OSCE consider. According to such users, it is impossible to take on trust statements of the local eyewitness about the guilt of so-called ‘militants’. In the network it is extended a demotivator on which this local resident supposedly specifies from where shells were arrived as a proof of his alleged lies. At the same time, the nature of destruction behind this man proves that the city was fired from the opposite direction. As a result it turns out as if this person tells a lie.

Actually, the photo of the man who is accused of lies to palliate the Armed Forces of Ukraine is a screenshot of a picture shot. The man describes the shelling from Novoazovsk, emphasizing the fact that attack was conducted not by the Ukrainian army. At the 1:02 minute of video he points out a hand toward the market but not in order to show the direction of flight of shells, but to show the place where he was at the time with his daughter. ‘There are three corpses only on that place where we have been’ – he says at this moment.

Words of the eyewitness confirm OSCE data,which also indicate that the shelling was conducted with the party of placement of fighters of ‘DPR’ (the ‘Donetsk People’s Republic’)