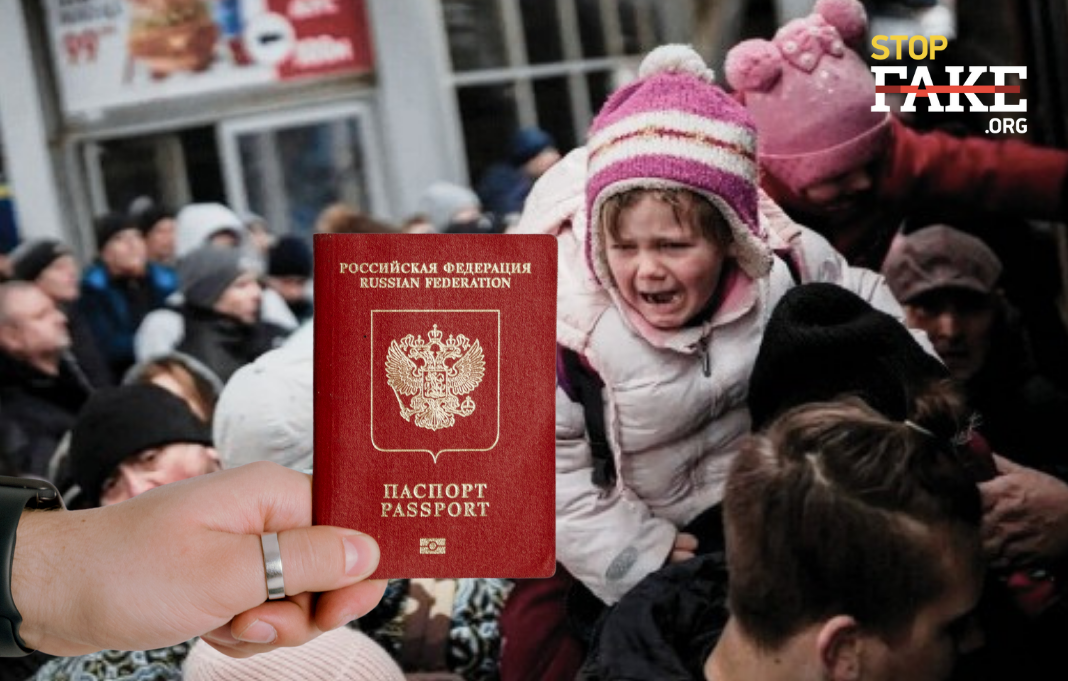 Citing the Russian Ombudsman Tatiana Moskalkova, Russian media are claiming that the Kremlin is not forcefully deporting Ukrainians from territories currently occupied by the invading Russian army.

On April 12 Tatiana Moskalkova declared that “forceful transfers of refugees to Russia have never happened, this is a lie.” Nevertheless, according to TASS, as of April 11, 740,000 people from Ukraine have crossed the border into Russia, most of them entering through the southern Rostov region. More than 206,000 of those refugees held Russian passports, 413,000 are citizens of the self-proclaimed Donetsk and Luhansk People’s Republics (DPR, LNR), 117,000 are citizens of other countries.

According to Ukrainian Parliamentary Commissioner for Human Rights Ludmila Denysova, every day some 20,000 Ukrainians are forcibly relocated to Russia from the Donetsk and Luhansk regions, with Ukrainians resettled now in 35 regions of the Russian Federation. Since Russia unleashed its full-scale war against Ukraine on February 24, more than 700,000 civilians from the Donetsk and Luhansk provinces, including 150,000 children were taken to Russia.

The blueprint for resettling Ukrainians arriving in Russia was worked out well before the February 24 Russian invasion. The Russian government was preparing for the deportation of Ukrainians to Russia well in advance and to that end issued a decree on February 12 regulating the placement of up to 95,000 people (Russian citizens, Ukrainian citizens, Donetsk and Luhansk People’s Republic residents) in different Russian Federation regions. A March 4 press release summing up the meeting between Tatiana Moskalkova and the Rostov region governor announces that almost 13,000 people, including more than 6,000 children from the unrecognized Donetsk and Luhansk People’s Republics were dispatched from the Rostov region to other Russian Federation districts.  Under the pretext of an alleged Ukrainian offensive against the Russian occupied territories in eastern Ukraine, a forced evacuation to Russia of mostly women and children from the unrecognized statelets began on February 18. Since then, everyone who enters the Russian Federation from Ukrainian territory is counted as a statistic in this forced evacuation process.

Since the beginning of the war, the southeastern port city of Mariupol has suffered the most from Russia’s brutal invasion. According to the Mariupol City Council, 90% of the city’s infrastructure has been destroyed as has 40% of the residential housing. Tatyana Moskalkova’s declarations that there have been no forced transfers of refugees to Russia disregard the fact that from the very beginning of the war, the Russian army has not allowed humanitarian corridors towards central Ukraine, thereby deliberately creating a humanitarian catastrophe. As reported by Oleksandr Starukh, the head of the Zaporizhzhia Regional Administration, the first refugees from Mariupol were able to reach Zaporizhzhia using their own transport, only on March 14. In the first two weeks refugees could not leave Mariupol for territories controlled by Ukraine because cars trying to leave the city were regularly fired upon by Russian troops. Subsequently, the Russian military announced that humanitarian corridors would be allowed only in exchange for the surrender of Mariupol.

From the very beginning the Russian Federation opposed the evacuation of the city’s population. “We don’t have orders to allow you out of the city. Go back or we will shoot,” Mariupol residents heard this at every Russian military checkpoint when they tried to escape from the city in early March, informs the Mariupol City Council.

The humanitarian corridor situation is extremely difficult in all areas of the Donetsk and Luhansk regions occupied by Russian troops. According to the Ukrainian Deputy Prime Minister Iryna Vereshchuk, on April 13 there were no humanitarian corridors operating along the entire front line. “In the Zaporizhzhia region the invaders blocked evacuation buses, and in the Luhansk region they violated the ceasefire,” Vereshchuk points out. In Melitopol, the second largest city in the Zaporizhzhia province, Russian troops prevented people from leaving for the relatively safe territory of Ukraine and instead forced them to sign up for evacuation to Russian occupied Crimea.

The evacuation of civilians from territories occupied by invading Russian troops has been problematic and raised numerous questions from the very beginning of the war. In parts of Mariupol captured by the Russian forces, many civilians had no choice but to go to territories not controlled by Ukraine or to go to Russia. Many did so under pressure from the Russian military, who forced them to leave their shelters and hiding places and directed them to “filtration camps” for identification and interrogation. Those who passed the filtration were then transported to various Russian regions, those who did not were imprisoned.

Mariupol mayor Vadym Boychenko also confirmed in mid-March that the Mariupol residents captured during the war were taken to filtration camps, where Russian troops checked their documents and mobile phones. “After these checks, some Mariupol residents were sent on to remote Russian cities, the fate of others remains unknown,” Boychenko said. Mariupol deputy mayor Serhiy Orlov informed that 30,000-40-000 people had already been deported to Russia. Mayor Boychenko confirmed this information. On April 7 Deputy Mayor Orlov advised that the deported Ukrainians are first sent to a general round-up camp and from there to a filtration camp. Those that fail to pass through the invaders’ filtration schemes end up in the Donetsk People’s Republic’s prisons.

All of this information is also confirmed by eyewitnesses who were in such Russian “filtration camps” which are and Manhush. It has also been confirmed that a Russian filtration camp is also established in Dokuchayevsk in the Donetsk region. When civilians are brought to these camps, their documents are confiscated. Russian security personnel from the FSB (Russian security service) determine who is to be sent where. They are particularly on the lookout for Ukrainian military, veterans, and law enforcement personnel. These people are then transported to the Russian Federation, particularly to Taganrog (Rostov region) and the Krasnodar territory.

Deputy Prime Minister Iryna Vereshchuk also confirmed the existence of Russian filtration camps. “They are filtered there, just like in Nazi Germany, they are sorted into those deemed trustworthy and those thought to be unreliable. Their documents are taken from them, they are checked for tattoos. And if, God forbid, a person has something in the form of a trident or our coat of arms, that person simply disappears and can no longer be found. Children are taken away from their parents, children from orphanages and boarding schools are also taken away to unknown locations” Vereshchuk said.

Tatiana Moskalkova disputes the facts that allow a different look at Moscow’s “voluntary evacuation.” At the end of March, Vladimir Putin’s spokesman Dmitry Peskov also said that “the Russian military helps civilians to leave freely when they try to leave these settlements, because otherwisw they are simply shot in the back.” Thus, the Kremlin is hiding behind the narrative that Ukrainian troops are allegedly shelling civilians who find themselves in a combat zone.

Meanwhile campaign materials began to appear in official Russian sources calling for further migration to the Russian far east. People who agree to such a resettlement are promised 170,000 rubles start-up capital, 8,500 rubles of social benefits in the absence of income, a housing certificate for 160,000 rubles and a far east annual 2% mortgage. According to the Ukrainian Defense Ministry’s Main Intelligence Directorate, after passing through the filtration camps, Ukrainians are sent to economically depressed Russian regions. A number of northern regions, in particular Sakhalin, are named as the final destination. Ukrainians are offered official employment through employment centers. Those who agree are issued documents that prohibit their departure from Russia for two years.

Ukrainian Ombudsman Ludmila Denysova reports that a similar “distribution” for Ukrainian residents arriving from Ukrainian controlled territories is already taking place through forced passportization. On April 10, Denysova stated that “by intimidating the most vulnerable categories of persons – women, persons with disabilities and pensioners, the aggressor authorities received almost 14,000 applications for Russian citizenship and issued 12,000 passports.”