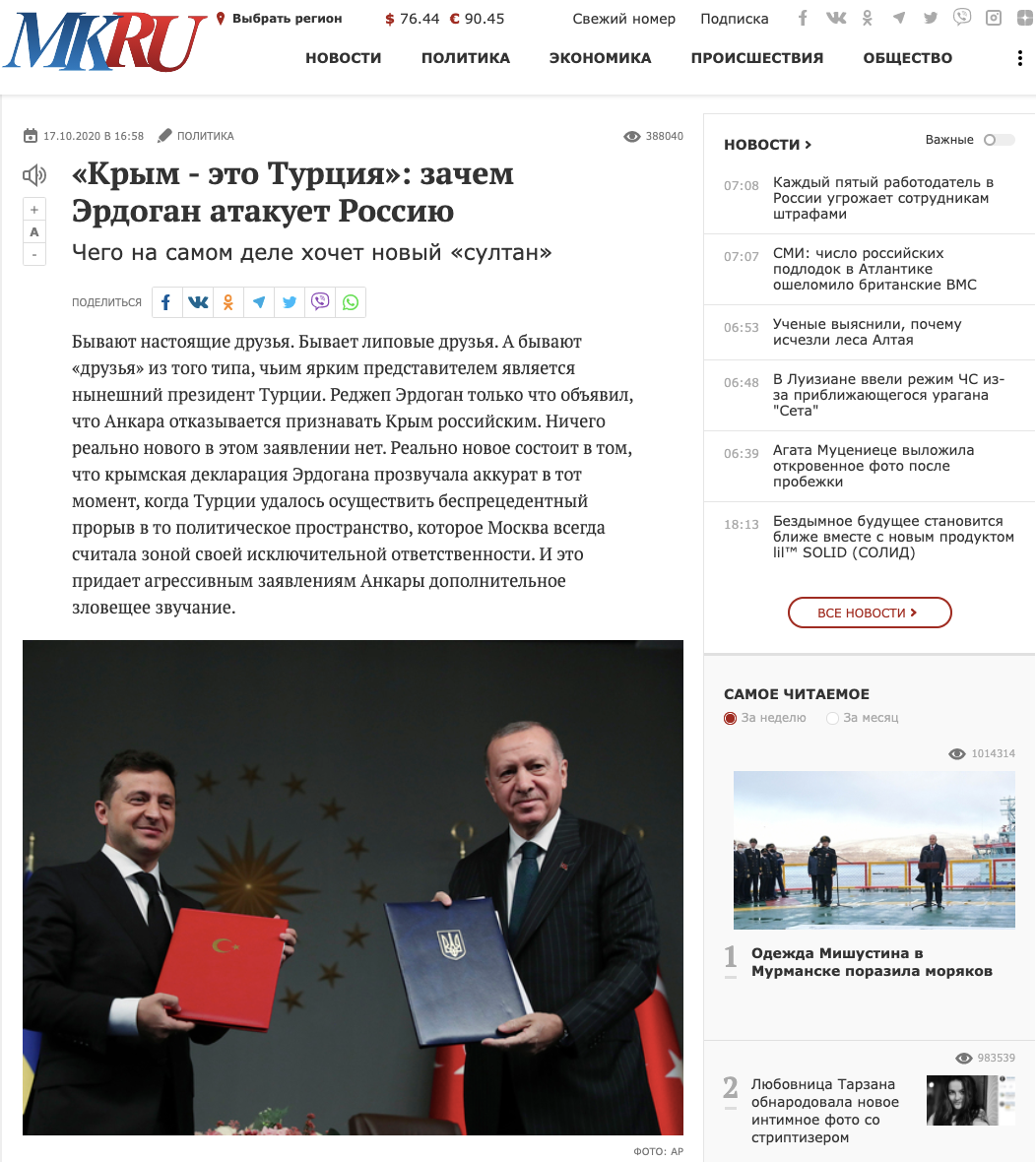 Turkey has often stated that Ankara does not support Russia’s annexation of Crimea, but rather supports Ukraine’s territorial integrity. Turkey has absolutely no pretensions towards the Ukrainian peninsula and has often supported and helped the Crimean Tatars, whose rights Russia violates on a massive scale.

Ukraine has dragged Turkey into a union against Crimea. Turkey is cooperating with Ukraine to spite the Kremlin and Ankara does not really recognize Crimea as Ukrainian, but rather considers the peninsula its own territory, dreaming of making it a part of Turkey. The clown and the sultan. This is how Russian media reacted to the news that the Turkish government is ready to cooperate with Ukraine on Crimea.

These stories began appearing in Russian media after Turkish President Erdogan announced that Turkey is ready to work with Ukraine within the framework of the Crimean Platform consultative body. Last July Ukraine’s Foreign Ministry launched the Crimean Platform, an international consultative mechanism focused on the consequences of Russia’s occupation of Crimea, with the aim of the initiative eventually becoming a negotiation platform on the de-occupation of the Ukrainian peninsula. According to the Ministry, the initiative will work on the level of heads of state, foreign ministries, parliaments and experts. A multi-level summit on the Crimean issue is planned for 2021.

The European Union, the US, Canada and the United Kingdom intend to join the consultative platform, separate EU countries such as Poland, Romania Germany, France and Sweden have also confirmed their solidarity with Ukraine and their intention to join. On October 16 Turkey joined the Crimean coalition resulting in a flurry of negativity in the Russian media about alleged “selfish Turkish interests” in Crimea. Without making any claims on the Crimea, Turkey has in fact repeatedly and officially stated that it does not support Russia’s annexation of Ukrainian peninsula and opposes the Kremlin’s occupation. Turkish authorities also emphasize that Turkey’s priority is respect for the rights of Crimean Tatars, whose rights the Kremlin is currently massively violating.

“For Turkey the priority remains ensuring that the Crimean Tatars living in Crimea continue to live in prosperity and security in their historic homeland, protect their cultural identity and to end their suffering as a result of the occupation” the Turkish Foreign Ministry said in a statement on the sixth anniversary of Russia’s illegal occupation of Crimea.

According to Ukrainian human rights organization KrymSOS, i the largest number of criminal cases against Crimean Tatars since the beginning of the occupation was recorded in 2019. In 2019, Russia illegally detained about 30 Crimean Tatars on trumped-up charges of links to Hizb ut Tahrir (pp. 16-17). In just one year, hundreds of illegal searches, detentions and arrests, and dozens of politically motivated cases have been reported in Crimea. 70% of all political prisoners are Crimean Tatars. More on the mass human rights violations on the occupied peninsula in can be found in this and this StopFake material.