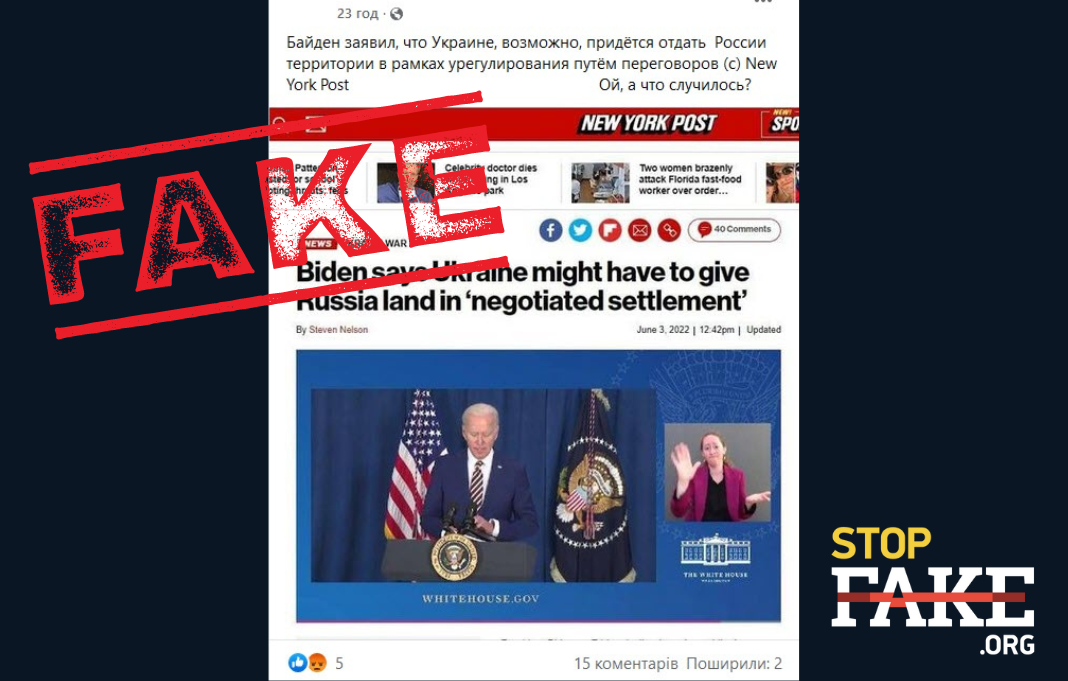 US President Joe Biden never said that Ukraine should give part of its territory to Rusia in order to end the war that Russia has inflicted on the country. Biden has always stressed that the United States will never force Ukraine into any decision regarding a ceasefire and truce with the Russian Federation, only Kyiv should decide the terms.

Social media and Russian news sites were abuzz with news items claiming that the American President said Ukraine would have to give some of its territories to Russia “as part of a negotiated settlement.” The source for this latest wave of fakes was a story in the US conservative daily tabloid newspaper New York Post.

Delivering remarks on the May Jobs Report, President Biden did not speak about Ukraine ceding territory to Russia. Responding to a journalist’s question “Does Ukraine have to cede territory to achieve peace?” (video timecode 19:55-20:38) President Biden said: “From the beginning, I’ve said and I’ve been — not everyone’s agreed with me — nothing about Ukraine without Ukraine. It’s their territory. I’m not going to tell them what they should and shouldn’t do. But it appears to me that at some point along the line, there’s going to have to be a negotiated settlement here, and what that entails, I don’t know. I don’t think anybody knows at this time. But in the meantime, we’re gonna continue to put the Ukrainians in a position where they can defend themselves.” Answering the reporter’s question, President Biden simply repeated what he had already made clear at the end or March: the US will not impose any decisions on Ukraine regarding a truce with Russia, Ukraine must decide for itself whether territorial concessions are possible or impossible to achieve that truce.

The White House also denies that President Biden is convinced that Ukraine will have to cede some of its territory tp Russia. At the June 1 briefing White House press secretary Karine Jean-Pierre was asked to clarify President Biden’s New York Times op-ed about Ukraine. Biden wrote that US policy is to see a democratic, independent, sovereign and prosperous Ukraine, but did not say ‘within its internationally recognized borders,’ the journalist pointed out and asked if that was a deliberate omission intended to signal to Zelensky that Ukraine would have to give up some of its territory in its negotiations with Russia. “I wouldn’t read into that in that way” Jean-Pierre responded (18:09-18:36) and added that the US continues to support Ukraine by providing modern weapons, including HIMARS missile systems, so that Ukraine can protect its territory from Russian aggression.

Claims that Ukraine must give away part of its territory to Russia in order to achieve a “truce” is a frequent staple of Russian disinformation narratives.  StopFake has repeatedly debunked such claims in articles such as Fake: Ukraine preparing to surrender Zaporizhzhia to Russia, Manipulation: Most Poles support the entry of troops into Ukraine to occupy Western Ukraine, Fake: Zaporizhzhia regional administration rules out returning to Kyiv control.