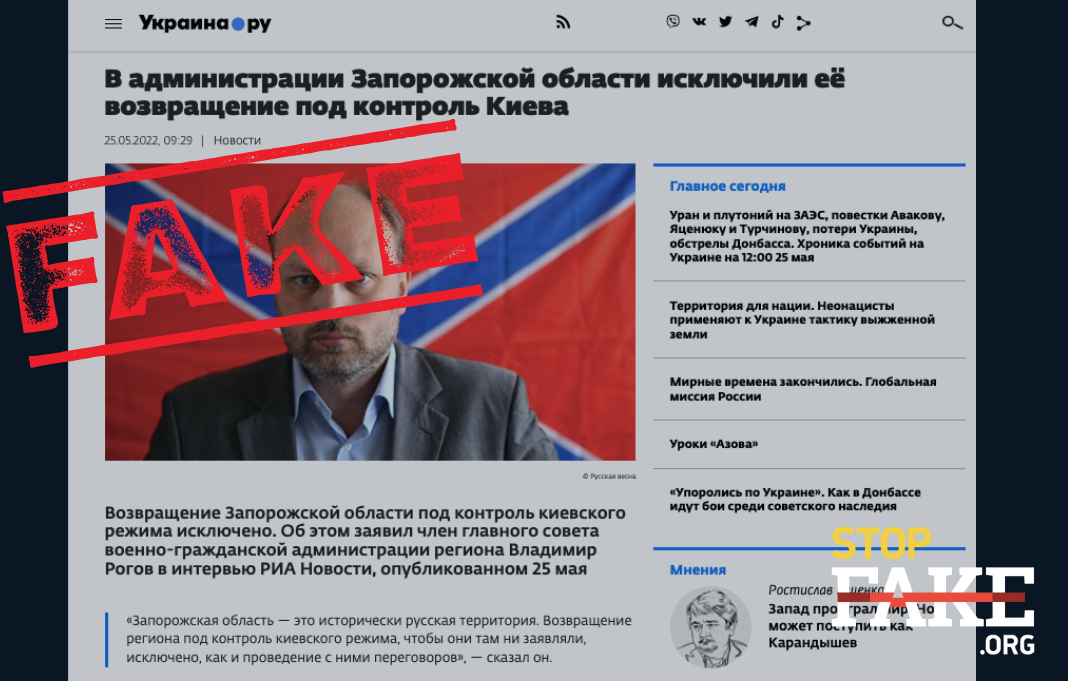 Vladimir Rogov is not an official in any Zaporizhzhia administration, his statements are pure propaganda and carry no political weight. In March 2022 Ukrainian police opened a criminal case into Rogov’s collaborationist activities. Part of Zaporizhzhia province is under Russian occupation, hostilities are continuing there, and Russian invaders systematically violate the rights of local residents, they impede free movement and are creating a humanitarian crisis.

The Kremlin propaganda machine once again resorts to using statements made by collaborators to further its propaganda narratives. This time, the Kremlin has announced that according to the regional administration, the temporarily occupied territories of Zaporizhzhia province will not “return to Kyiv control”.

“The Zaporizhzhia region is historically Russian territory. No matter what the say, returning the region back to Kyiv control and holding negotiations with them is out of the question,” Ukraina.ru quotes Vladimir Rogov, a protégé of the Russian occupying authorities.

Collaborators’ pronouncements are not the official position of the Ukrainian authorities, nor do they represent the position of the local residents of the region. Zaporizhzhia is Ukrainian territory, both legally (as enshrined in the country’s Constitution) and historically. It was here that the Zaporizhia kozaks arose as a political force and the Zaporizhian Sich was created in the 16th century. Even after the regions became part of the Russian empire, Ukrainians continued to be the majority population there.

It is also worth noting that the vast majority of Ukrainians – 82% – are not ready for any territorial concessions just to achieve peace with Russia. These were the results of a recent Kyiv Institute of Sociology poll conducted on May 13-18 with 2,000 respondents interviewed. 77% of Ukrainians currently living in temporarily Russian occupied territories also believe that under no circumstances should Ukraine give up any territory, even if this will prolong the war and might threaten the country’s independence.

Vladimir Rogov is a Russian propaganda mouthpiece and a Russian collaborator, whose pronouncements should not be taken seriously. On March 29 Ukraine’s National Police launched a criminal case against him based on his Russian collaboration activities. Rogov was infamous in the past for spreading fake Russian agitprop, appearing on Russian propagandist television programs, participating in such Russian chauvinist organizations as Slavic Guard, Russian Sector, Russian Vector and for organizing anti-Maidan rallies in Zaporizhzhia in 2014.

Russian occupying forces systematically violate the human and national rights of Ukrainian citizens living in the Zaporizhzhia region. Freedom of movement is curtailed; people are prevented from leaving the occupied territories and a humanitarian crisis is in the making.

Earlier, StopFake refuted Russian propagandist claims that the Sea of Azov now allegedly “belongs to Russia and the so-called Donetsk People’s Republic (DPR) and that the residents of Zaporizhzhia are allegedly asking to become part of the DPR.