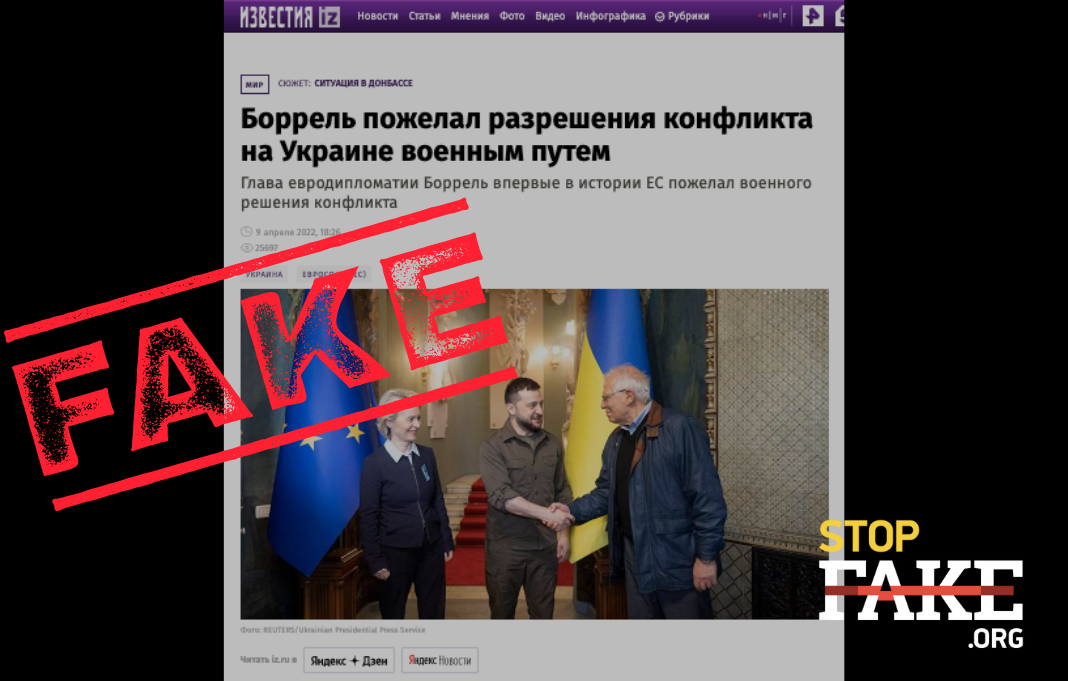 Josep Borrell is proposing tougher sanctions to pressure Russia to stop its war crimes in Ukraine. He sees increased weapons supplies to Ukraine as a way of helping Kyiv protect its territory and its people from Russian army attacks and notes that Ukraine will definitely prevail.

Russian media are disseminating disinformation about the EU High Representative for Foreign Affairs and Security Policy Josep Borrell, claiming that in his Twitter feed Borrell summed up his recent trip to Ukraine and “for the first time in the history of the EU, he wished for a military solution to a conflict.”

To support their claim Russian propagandists used one fragment of one tweet from Josep Borrell’s Twitter thread, in which he describes his end the war in Ukraine to-do list with which he is returning from Kyiv: “this war will be won on the battlefield”.

Mr. Borrell’s entire Twitter thread is filled with EU support for Ukraine toward a successful end of Russia’s war against Ukraine on all fronts, military and diplomatic.

In the next tweet, which Russian propagandists don’t even bother to mention, Josep Borrell explains that Russian war crimes are the reason for increased EU support of Ukraine: “Brutal attack by Russia against defenseless civilians in #Kramatorsk again shows Kremlin’s complete disrespect of human life. It will only increase our support to Ukraine.”

Borrell believes that sanctions are the tool to pressure Russia and it is sanctions that he focuses on in the third tweet of his Twitter thread: “We need to continue to increase our pressure on Russia. We have imposed massive sanctions already but more needs to be done on the energy sector, incl oil.”

Military support for Ukraine is the only way to protect the country from attacks by the Russian army and the main way of pressuring Russia towards a ceasefire is to ratchet up the sanctions in response to the Russian army’s war crimes spree in Bucha and other Ukrainian towns.

“We want the war to end as soon as possible, but not in any way. Because if we’re going to have a destroyed country that has been dismembered territorially and neutralized, with millions of people in exile, and millions of people dead, then no, we don’t want this war to end like this.  That is why we have to continue arming Ukraine… More weapons, that is what the Ukrainians expect of us” Josep Borrell said.