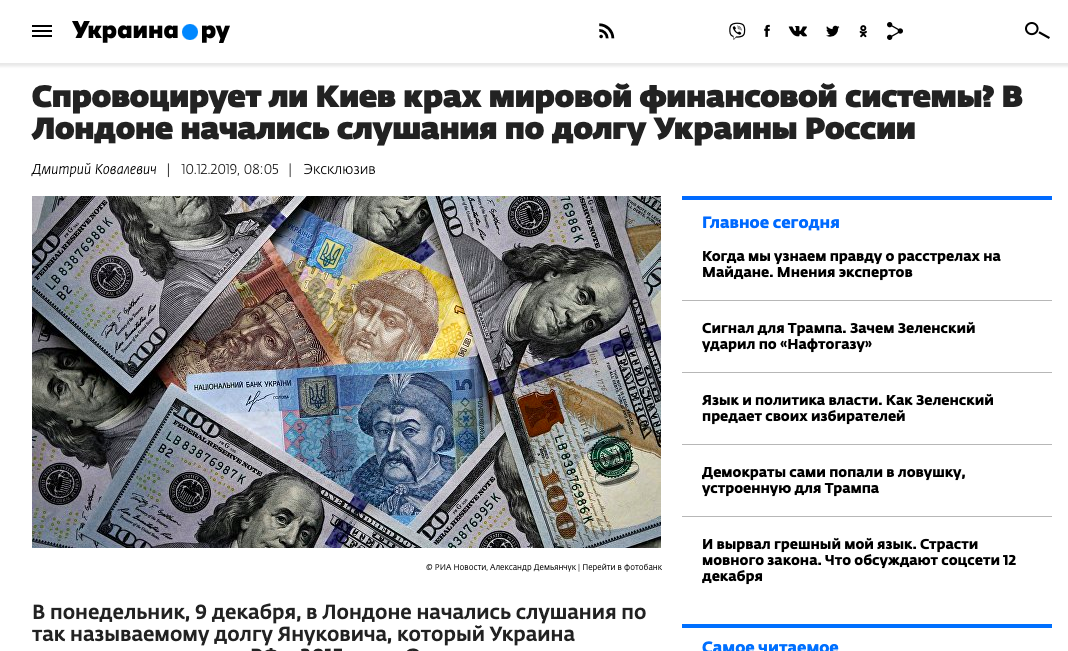 Great Britain finds Ukraine guilty in its dispute with Russia over outstanding Eurobonds, the three billion dollars that ousted Ukrainian president Viktor Yanukovych borrowed from the Kremlin in 2013. Russian media was awash with similar headlines at the beginning of December when the British High Court of Justice began a four day hearing in the dispute between the Kremlin and Ukraine. Russian media also went on to claim that this dispute and Ukraine’s “destructive position” could bring about the collapse of the global financial system.

“Moscow has a great chance to get a decision in its favor. The $3 billion is a sovereign debt and Ukraine’s attempts to present things in a different light will come to nothing. The British Court has actually confirmed this” writes RT.

In December 2013 then President Viktor Yanukovych and the Kremlin agreed that Russia would give Ukraine a $15 billion credit for the placement of Ukrainian securities. Shortly after this meeting bonds worth three billion were placed on the Irish Stock Exchange and subsequently bought by Russia. As the Maidan Revolution unfolded in Ukraine, Yanukovych received three billion dollars for abandoning the Association Agreement with the European Union and absconded off to Russia. The Kremlin demanded Ukraine pay off the credit with interest by December 2015. However, in December 2015 Ukraine’s new government placed a moratorium on the debt repayment.

In 2016 Russia sued Ukraine in the British High Court of Justice for failing to repay the debt. Russia claimed that it had to resort to the suit after Ukraine refused to discuss debt restructuring and the 3 billion dollar bonds were an official credit and not a political bribe. In March 2017 the Court ruled that a trial was not necessary and Ukraine should pay back its political debt. Ukraine’s Finance Ministry appealed the decision insisting that Russia imposed this credit on Kyiv through threats and blackmail. Following Ukraine’s appeal the High Court suspended its preliminary ruling.

“The claim is in reality a tool of oppression which includes military occupation, destruction of property, the unlawful expropriation of assets, and terrible human cost” Ukraine’s appeal reads.

The Supreme Court must now decide how future debates in the appeal will take place, according to Russian demands of summary procedure or according to Ukraine’s demand, taking into account all facts of Russian aggression. On December 10 Ukraine’s Finance Ministry presented its position, insisting that the political component be part of the appeal case. It is far too early to claim that the British Supreme Court has found Ukraine guilty and ruled for Russia in its suit against Ukraine.

The fake narrative about the collapse of the world economic system is also completely ridiculous as the suit involves two countries, Ukraine and the Russian Federation, and no matter how the case is adjudicated, it will not affect the global financial markets in any significant way. The Supreme Court has yet to decide whether a full trial is to be held in the three billion Yanukovych debt case. The Supreme Court ruling based on the December 9-12 hearings is expected in the first half of 2020.