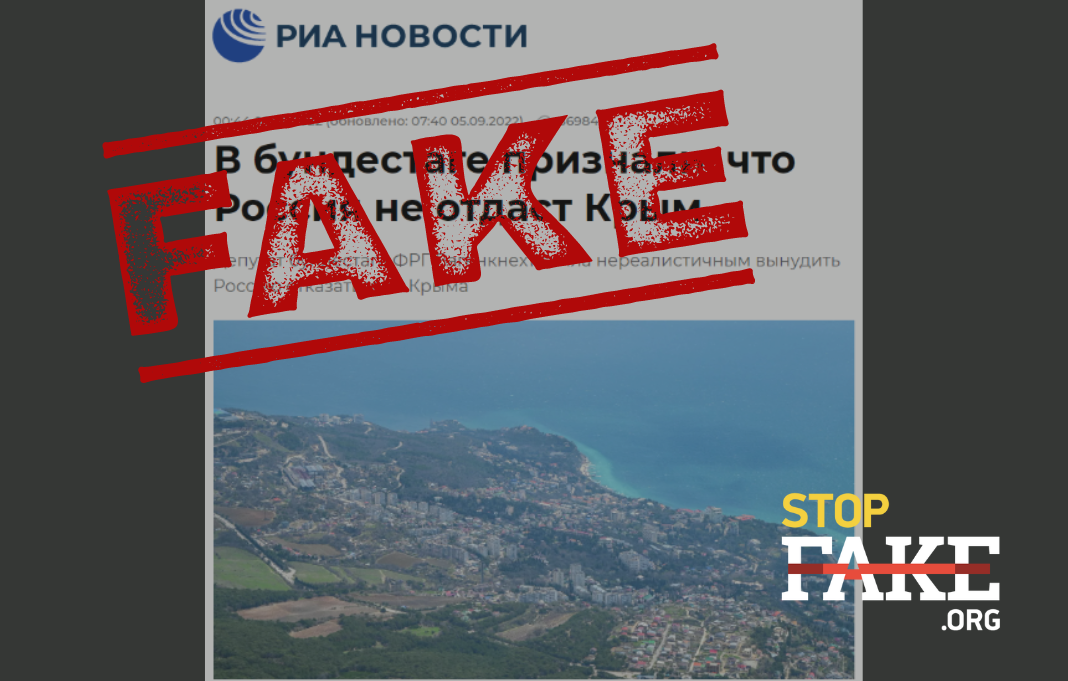 A new Kremlin fake claiming that the German “Bundestag has recognized that Russia will not give up Crimea” is not an official German position, has nothing to do with the German government nor has it anything to do with the German parliament. German Chancellor Olaf Scholz has said he is confident that Western countries will “never recognize” the Russian seizure of Ukrainian territories and that he will continue to exert sanctions pressure of Moscow. This particular fake is yet another example of Russian propagandists passing off the private opinion of one politician as the official position of the state. In this case they have latched onto the statement of Bundestag deputy Sahra Wagenknecht from the German Left Party (Die Linke).

Wagenknecht made this statement in an interview with Germany’s largest news portal t-online. She believes that the war can be stopped when both sides are ready to compromise. Crimea, according to Wagenknecht, is one of those compromises.

“Let’s not forget that Russia is a nuclear power. If you insist on the expulsion of the Russians from Crimea, then this terrible war will continue forever. The Russians have had their Black Sea Fleet in Crimea for decades, and they will not give it up. Do you want to sacrifice tens of thousands, maybe hundreds of thousands of human lives for a completely unrealistic goal?” asks Wagenknecht.

Sahra Wagenknecht’s position, however, contradicts the official position of Berlin, which supports the UN General Assembly Resolution A/RES/68/262 on the territorial integrity of Ukraine. Wagenknecht’s opinion also runs counter to the position of the European Union, which imposed sanctions against Russia because of its annexation of Crimea.

The German Left Party has not made any statements supporting Wagenknecht’s position on Crimea, a position that is the personal opinion of the politician.

Wagenknecht’s view on Crimea goes against international law, the interests of Ukraine, UN resolutions and the position of the EU, it does however coincide with Russian statements and interests, particularly the view of Russian President Vladimir Putin, who has said that “the issue of Crimea is closed.”

Deputy Wagenknecht believes that Russia’s reaction to Ukraine retaking Crimea would be “nuclear weapons” and the “Black Sea Fleet.”

Russia’s Security Council Deputy Chairman Dmitri Medvedev has expressed a similar warning to Ukraine over Crimea. “They are trying to threaten us, meaning an attack on Crimea… If something like this happens, then Judgment Day will come for them all instantly. A very quick and most heavy Judgment Day. It will be very difficult to hide.” Medvedev said (video, from 00:33)

After Ukrainian strikes on the military airfield in temporarily occupied Crimea, the Russian promised doomsday did not come, and Russia lost a significant part of the naval aircraft. As for the Black Sea Fleet itself, which Bundestag deputy Wagenknecht is warning us with, the Ukrainian military have already destroyed 15 Black Sea Fleet ships, with the fleet’s flagship cruiser Moskva, worth $750 million being among them. Russia has also lost control of Snake Island in the Black Sea.

Wagenknecht asks us not to forget that “Russia is a nuclear power.” Russia also doesn’t allow the world to forget this, with both politicians and Kremlin propagandists scaring and threatening the West with nuclear strikes.

Russian propagandists have threatened to use nuclear weapons to destroy the “enemy” and turn (in the video from 00:47) “the United States into radioactive ash” or drown “England once and for all” with one Sarmat missile.

Russian Duma deputies have threatened nuclear strikes against the US, Azerbaijan and direct and immediate hits on Washington, London and Brussels. Dmitri Polyansky, the Deputy Permanent Russian Representative to the UN has said that he is sure that “we can use nuclear weapons.”

After the February 24 Russian invasion of Ukraine, Russia has been using nuclear terror against Ukraine by seizing nuclear power plants and accusing Ukraine’s military of shelling them and provoking a nuclear catastrophe. Ukraine’s Chornobyl nuclear power plant was under Russian military control from February 24 to April 1, 2022, during which time it was turned into a military base.

Since March 4, Europe’s largest atomic energy plant, the Zaporizhzhia Nuclear Power Plant has been under the control of Russian armed forces, who have been using the plant as a military base while constantly accusing Ukraine of provocations. But Sahra Wagenknecht, of the German Left party does not mention these Russian nuclear threats.

This German leftist politician is more concerned about Russians being “expelled from Crimea” which would provoke an “eternal war”. At the same time, Wagenknecht says nothing about the occupying troops leaving the territory of Ukraine in order to stop this very war. Wagenknecht calls the liberation of the peninsula “an unrealistic goal,” for which one must “sacrifice tens of thousands, maybe hundreds of thousands of human lives.” But at the same time, she does not mention the current horrific situation with human rights in occupied Crimea and the regular shelling of the Ukrainian mainland from Crimea.

According to the Ukrainian Constitution, “The Autonomous Republic of Crimea is an inalienable part of Ukraine” (Article 134). Ukraine did not transfer this territory to Russia and has determined legislatively that “The Autonomous Republic of Crimea and the city of Sevastopol have been temporarily occupied by the Russian Federation since February 20, 2014.”

Ukrainian President Volodymyr Zelensky has said Ukraine would return Crimea “by any means we decide. We will decide on our own, without consultions with any other state.”

The UN General Assembly Resolution A/RES/68/262 on the territorial integrity of Ukraine, adopted on March 27, 2014, confirms the sovereignty and territorial integrity of Ukraine within its internationally recognized borders. The resolution does not recognize the legality of changing the status of the Crimean Autonomous Republic and the city of Sevastopol, based on the results of the “referendum” held on March 16, 2014. The “referendum” itself, according to this resolution, has no legal force.