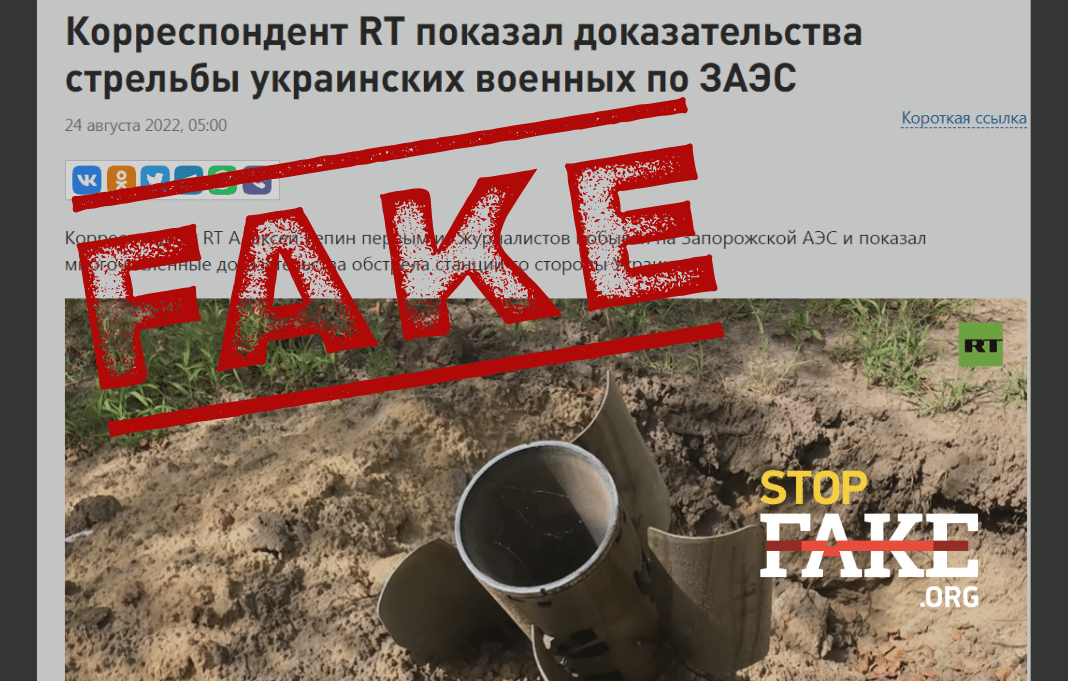 The Ukrainian Armed Forces did not shell the Zaporizhzhia nuclear power plant in the city of Enerhodar. An analysis of missile trajectories and the nature of the damage confirms that strikes were carried out from the territories controlled by Russian occupation troops. The Russian propaganda video shows footage of another facility, the Zaporizhzhia thermal power station, which is about 7 kilometres away from the nuclear facility and which stopped operating back in May due to a shortage of coal.

Let’s take a closer look at the story by RT propagandist Alexei Repin. He shows a damaged building and calls it “one of the pumping stations”. He claims that “the nuclear power plant was saved from serious damage only because the equipment was in the basement”.

As evidence, viewers are shown (on the video from 00:04) the remains of the shell that destroyed the “pumping station at the beginning of July”. The site near the station is concrete, but the shell hit open ground with a lawn. And it got there not at the end of July, as propagandist Repin says, but on August 5. This was reported by the Russian Defense Ministry. At that time, the Russian military tried to accuse Ukraine of shelling “the oil storage facility and the oxygen station”. And as proof they showed (in the video from 00:16) fragments of the same shell as Repin did.

The following evidence confirms that both videos show the same shell debris. The same oblong cross-shaped scratch on the projectile shank (1). Four preserved fins. Identical turf and soil (2) at the blast scene. Spiderweb in the nozzle. These are not seen in the Defense Ministry video from August 5, but in the RT video taken two weeks later it is already visible (3). Consequently, the debris was lying in the same place for a long time.

RT propagandist Repin showed 30 second footage of two different buildings “damaged by the strikes”. First, the camera is near a facility with construction debris, which is called a “pumping station”. But after the “shelling” the canopy over the door and the air conditioner on the wall show no signs of damage. It is worth noting that there also are no shell remains sticking out of the ground on the concrete pad.

After a while, Repin is near another building (on the video from 00:23), with plenty of broken glass nearby.

If the building, which according to Repin, was shelled at the end of July, then why is the glass, which has been lying outside for almost a month, clear and clean? It is important to note that there are no shell remnants on the lawn next to the building, either.

In the last 10 seconds of the video the viewer sees (in the video from 00:40) the same frame: two factory pipes, gates, concrete fence, an information board, sign a “No Parking”sign, a gray Toyota Camry and lattice fence.

Zooming in on the information stand shows the inscription “Traffic pattern on the territory of Zaporizhzhia TPS (Zaporizhzhia thermal power station)”. Also above the stand you can see a sign with the logo of the Ukrainian energy company DTEK.

With the help of Google maps StopFake found this building, which turns out to be one of the checkpoints at the Zaporizhzhia thermal power station (TPS). The station belongs to the private Ukrainian energy company DTEK. The last time the company’s website mentioned the station was right before the Russian army occupied Enerhodar on March 3. According to Enerhodar’s mayor, the Zaporizhzhia TPS stopped operating in early May due to coal shortage, the delivery of which was blocked by Russian occupants.

Zaporizhzhia TPS, a completely different energy plant, is 7 kilometres away from the Zaporizhzhia atomic plant. But this did not prevent RT propagandist Repin from passing it off as the Zaporizhzhia nuclear power station, allegedly being shelled by the Ukrainian side.