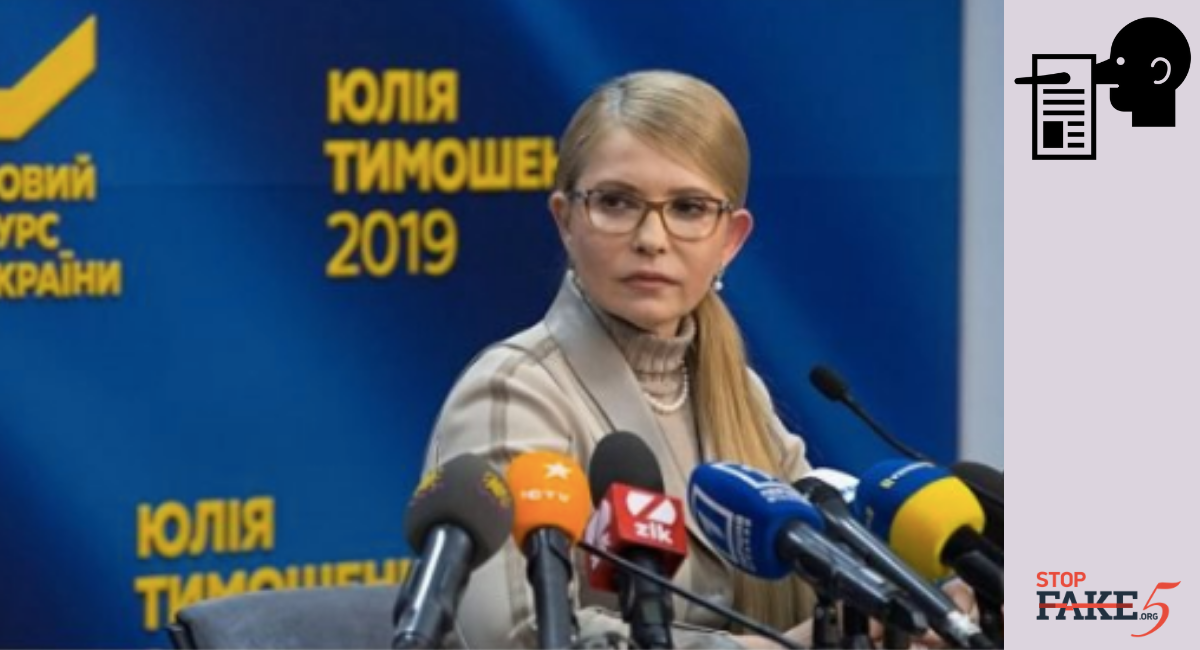 A number of Russian and pro-Kremlin media distributed information about criminal cases allegedly opened against Ukraine’s president Petro Poroshenko in the European Union and the United States. The websites Ukraina.ru, “Narodnyi Korrespondent”, «Gazeta.RU» , and other media outlets quote Ukraine’s presidential candidate Yulia Tymoshenko who made the claim during a press conference in Lutsk on March 23.

According to Yulia Tymoshenko, the anti-corruption investigation against Poroshenko was opened by a Cyprus Court, the UK’s Serious Fraud Office (SFO) and the European Anti-fraud Office (OLAF).

“This, in fact, was the result of many years of corruption, which was carried out by the president and his closest associates and business partners on the defence budget. When the EU opens a corruption investigation against the head of state, it means that the law enforcement agencies in Ukraine, unfortunately, do not work. The Prosecutor General’s Office and the Security Service of Ukraine have in fact, become departments of the Roshen corporation, which have neither the freedom nor the desire to investigate the resonant corruption cases of Poroshenko and his associates,” said Tymoshenko as quoted by the press service of the Batkivshchyna party.

After this information was spread, Ukrainian media outlets turned to the European Anti-fraud Office, which denied the veracity of the claim.

“OLAF confirms that there are no investigations related to the president of Ukraine. In the event that any information that may be of interest to the investigation, OLAF will evaluate it in the context of our usual procedures”, OLAF said, as quoted by Evropeyskaya Pravda.

Russian media, quoting Tymoshenko, also claimed that such cases were initiated in the United States against the president of Ukraine, Petro Poroshenko.

“Also today, Ukrainian journalists were informed about a corruption investigation that opened in the United States against the current president’s entourage,” said Tymoshenko, as quoted by Ukraina.ru.

However, the official report on the website of the presidential candidate’s party “Batkivshchyna” states that Tymoshenko herself spoke about Poroshenko’s team, and not about him personally.

“In addition, it became known that a corruption investigation was opened in the United States against the current president’s entourage: “Other states have already started to work in all areas, while the law enforcement agencies in Ukraine are not working”, the statement said.

“Another fake story from Tymoshenko is her dissemination of misinformation regarding criminal cases allegedly opened against Petro Poroshenko by a court in Cyprus and by a number of European anti-corruption bodies. The false nature of Tymoshenko’s allegations was only confirmed by the European Anti-fraud Office (OLAF). After the request of Ukrainian media, it stated that it had not opened any investigations against the President of Ukraine,” Poroshenko’s party said in a statement.

It is also worth noting that Yulia Tymoshenko did not provide any evidence that criminal cases were initiated against Poroshenko.