Last week the pro-Kremlin siteUkraina.ru reported that the European Parliament allegedly adopted a resolution in which Ukraine as an heir of the Soviet Union is “recognized as a criminal”.  According to this fake story, the European Parliament’s resolution on preserving historical memory allegedly states that Ukraine is a double target of criticism – as an USSR heir and as the descendant of the contemporary incarnations of neo-Nazism and xenophobia. The Ukraina.ru article concludes that the veracity of its claims is borne out by Ukrainian media completely ignoring the EU resolution because its text was ‘inconvenient’ for Kyiv. 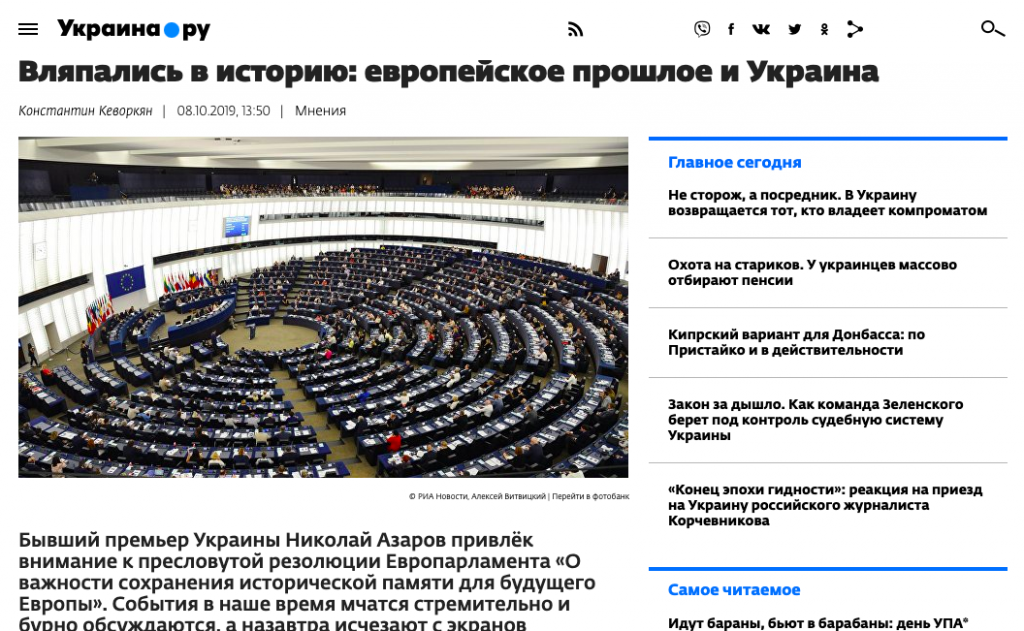 The EU Parliamentary resolution on the Importance of European remembrance for the future of Europe was passed on September 19, but seems to have been noticed by Russia’s pro-Kremlin media only a month later. The document does not address any Ukrainian mythical guilt for World War II, but does address the very real crimes of Nazi Germany, the Soviet Union and its successor, Russia. The text states that with their destabilizing actions, it was Nazi Germany and the USSR that unleashed the bloodiest war of the century. The resolution emphasizes that the two totalitarian regimes cooperated politically, economically and militarily, and through the Molotov-Ribbentrop Pact and its secret protocol, agreed to divide Europe. 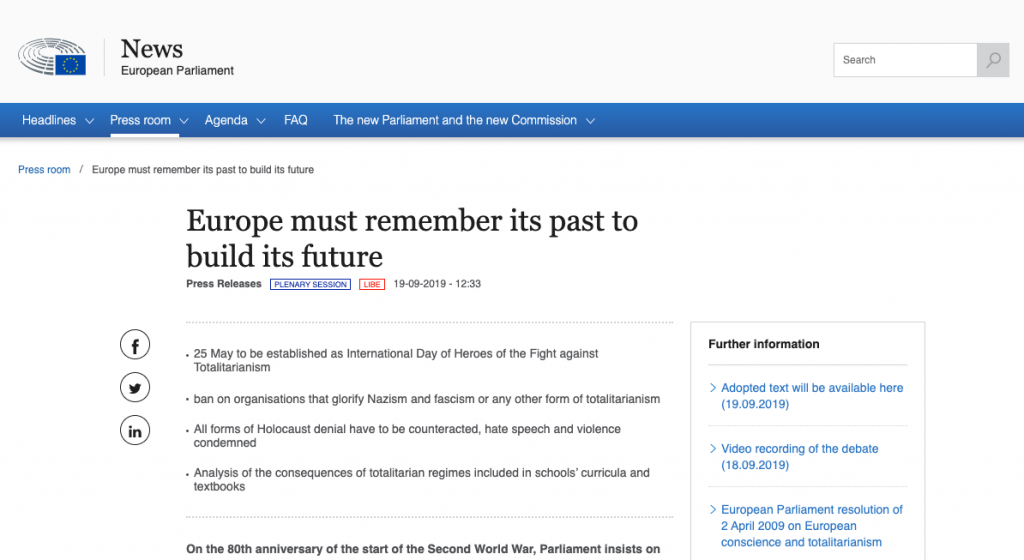 The resolution voices concern at the efforts of the current Russian leadership to whitewash crimes committed by the Soviet totalitarian regime and sees them as a “dangerous component of the information war waged against democratic Europe”. The text also emphasizes that “Russia remains the greatest victim of communist totalitarianism and that its development into a democratic state will be impeded as long as the government, the political elite and political propaganda continue to whitewash communist crimes and glorify the Soviet totalitarian regime. It was specifically these lines that pro-Kremlin media does not to mention in their fake stories, instead replacing concepts and completely distorting the meaning of the resolution.

This EU resolution condemning the USSR and Russia was widely covered by various Ukrainian media, contrary to Ukraina.ru’s claims and the Ukrainian Institute of National Memory welcomed the document.

In an official statement the Institute points to the crimes committed by the Nazi and Soviet totalitarian regimes, the Holocaust, mass deportations of peoples, reprisals against Polish and Latvian officers, the artificial famine in Ukraine and the gulag system. While Nazi acts were condemned by the Nurnberg trials, communist crimes have yet to be assessed morally and legally, the statement notes. 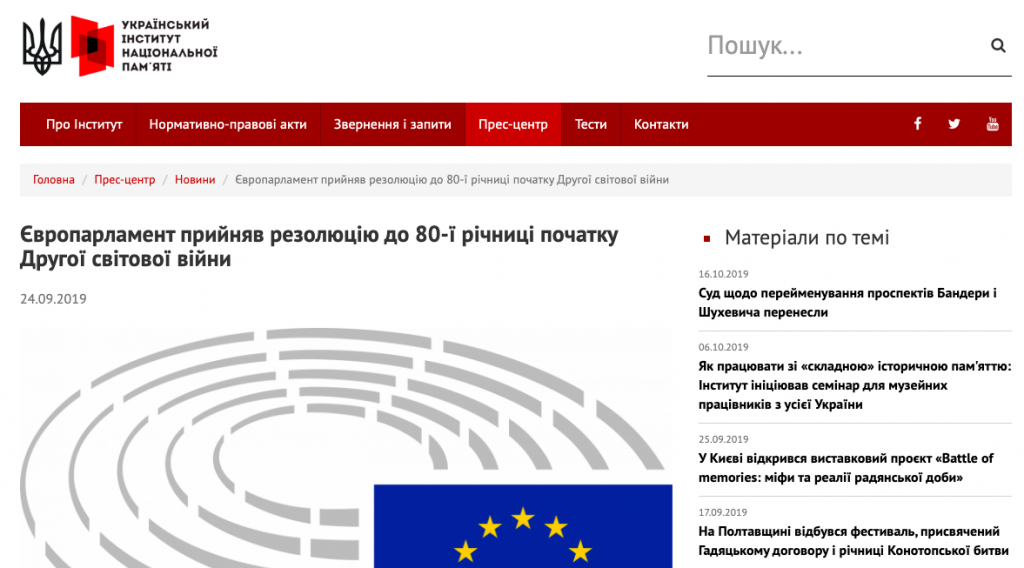 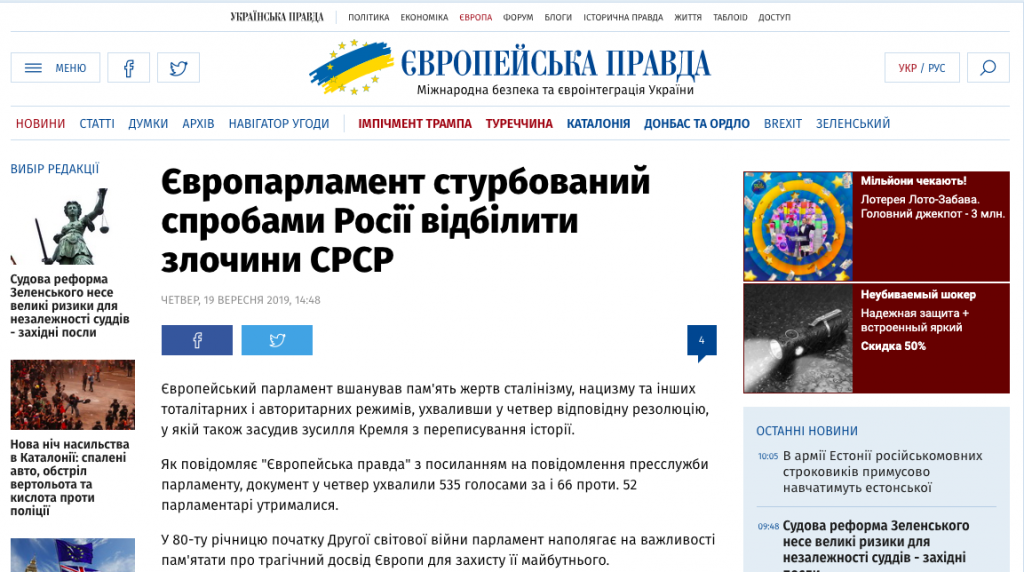 Glorification of the Great Patriotic War – that is what the Soviet Union called World War II and what Russia continues to call it today – is a staple of Russia’s propaganda mill, but that glorification resorts to blatant historic revisionism, positing that the Soviet Union was never allied with Nazi Germany and that Soviet occupation was a myth.