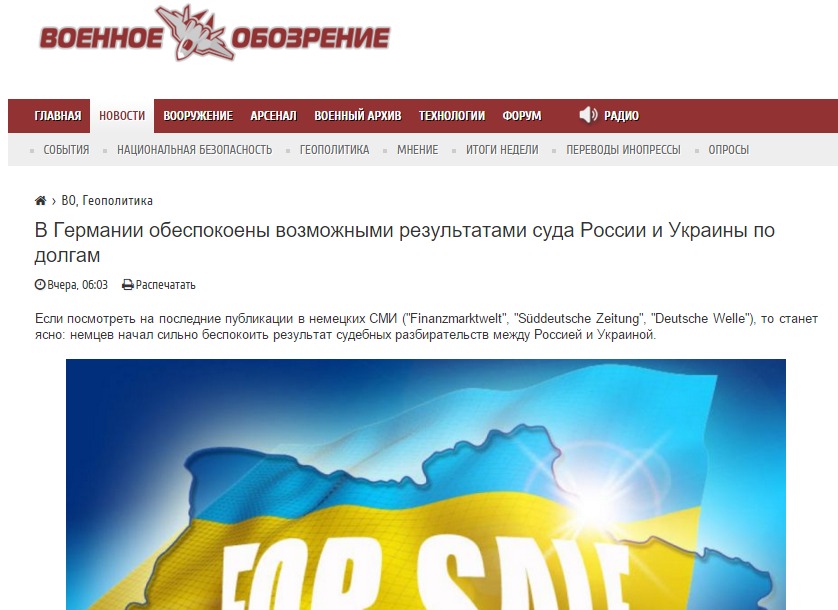 On December 23, the Russian website Military Survey informed that Germans and German media are becoming uneasy about a judicial settlement between Ukraine and Russia. The case concerns Ukraine’s inability to repay a 3 billion dollar bond to Russia, which was due at the end of 2015.

The news was reposted by the Russian website Ukraina.ru.

The article claims that this issue was featured by three German newspapers: Finanzmarktwelt, Süddeutsche Zeitung, Deutsche Welle (the links to the articles, however, are absent).

The Military Survey journalist writes that “Germans are uneasy” because if Ukraine wins the case, it could refuse to repay money borrowed from Germany and the International Monetary Fund.

The article also says that German media are concerned that Greece will also refuse to pay its international creditors. “Greeks are a headache for Germans. Greece owes Germany 64.9 billion euros” according to the Military Survey article.

The last stories in Finanzmarktwelt, Süddeutsche Zeitung, and Deutsche Welle about the judicial debt settlement between Ukraine and Russia could be found with the help of an advanced Google search.

Several relevant articles were found in Deutsche Welle: “Kyiv Refused to Repay Moscow Debt” (December 18) and “Russia Sues Ukraine for Its Debt” (December 9). One article from December 9 is in Süddeutsche Zeitung. The online publication Finanzmarktwelt raised this topic more often: on December 8, 10, 16, 18 and 21.

The Greek question was mentioned only in the Finanzmarktwelt article from December 10 “Ukraine: Putin Announced Trial, Yatseniuk Replied ‘We’re Fully Armed’”. Journalists pointed out that the decision of the IMF directors to change the rules of crediting was “more than surprising” because in the case of Greece, the IMF kept to a stricter position. However, there is nothing in the article about “concern” that Greece would not repay its debt to Germany.

No-one German article mentions that Ukraine could refuse to pay its debts to Germany or to the IMF.