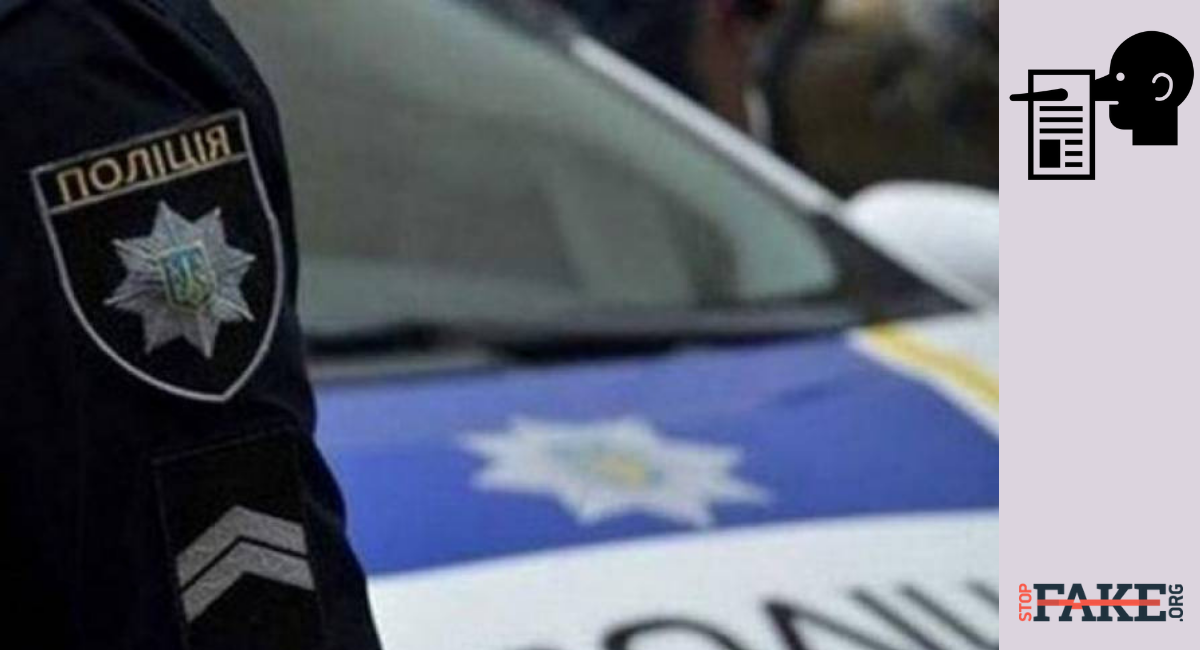 Social media, chat rooms and regional Ukrainian media all circulated stories claiming that a Ukrainian boy was cruelly murdered by Hungarian youths in a village near Berehovo in Transcarpathia. This information first appeared on Facebook on October 30 but was soon deleted. Soon thereafter the claim appeared on the Politiko social forum under the name Nadia Smereka.

This posting is the only notification from Nadia Smereka on the Politiko site. Smereka, if that is her name, presents herself as the mother of a 12-year old boy who was raped and beaten by local teenagers in a town in a predominantly Hungarian town in Transcarpathia. The boy died as a result of the beating and local police have refused to investigate the matter, Smereka writes. She also posts what purports to be a letter from the local police advising her that based on the information she provided, there are no grounds for opening up a criminal investigation into the death of her underage son.

Smereka’s Politico posting concludes that as all local government positions are held by Hungarians, no one is willing to punish the perpetrators. “…In a village where Ukrainians are a minority, they look down on us. We can be offended, mocked, denied protection… Why are they allowed everything? Why are we defenseless here at home, on our own land? Please publicize this crime!” Smereka’s post reads. 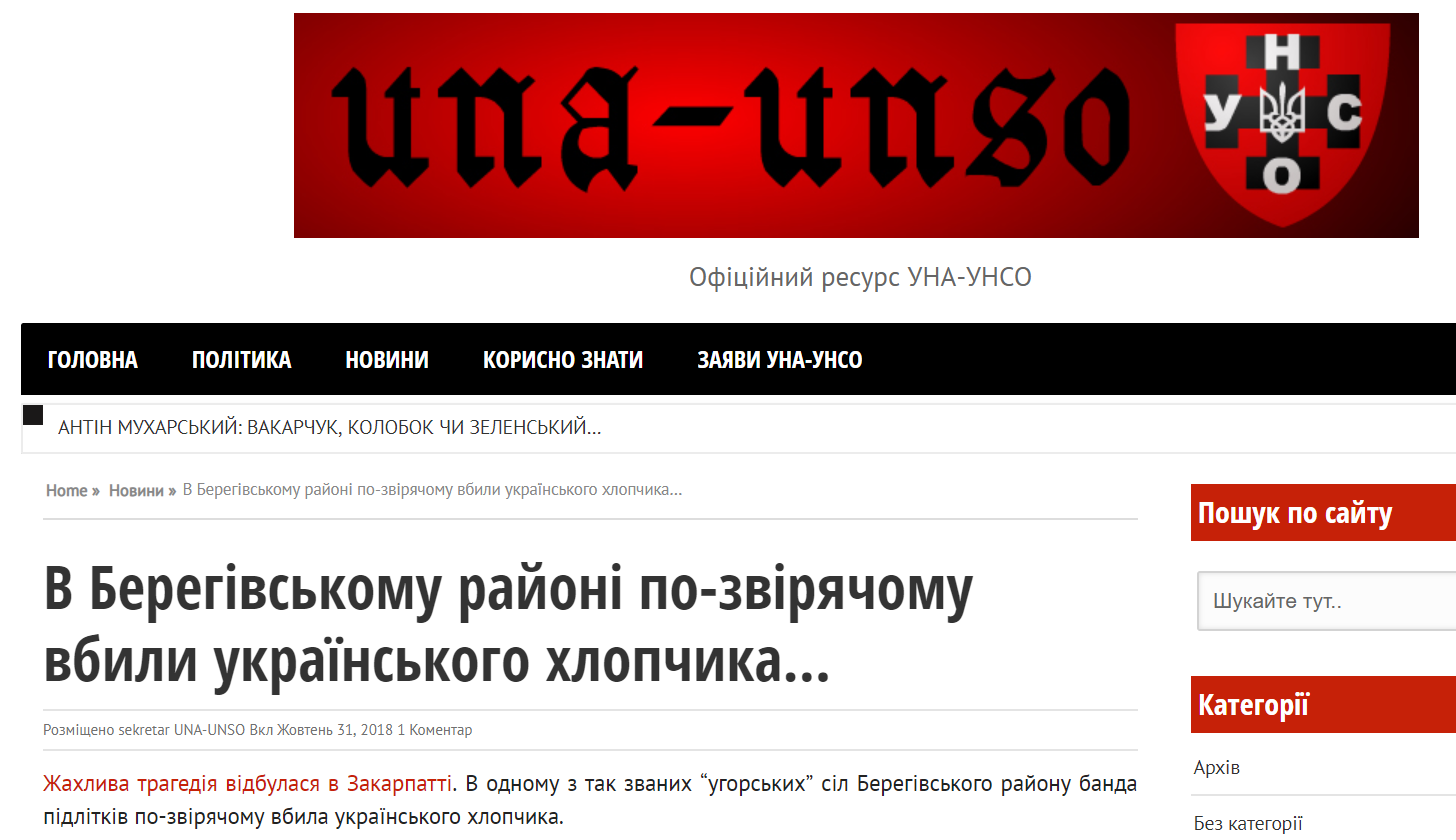 Smereka’s notification began making rounds on social media and various marginal sites, with calls for revenge following on sites such as LiveUkraine, Journalists against Corruption, MyNizhyn, Dynamo.Kiev and others. Certain radical right organizations also disseminated this fake story as well as scores of newly created social media accounts, accounts without any previous or subsequent posting. Mikola Shtur for example, opened on account on the Live Ukraine portal on October 31, published one notification about the alleged killing and never again appeared on the site. 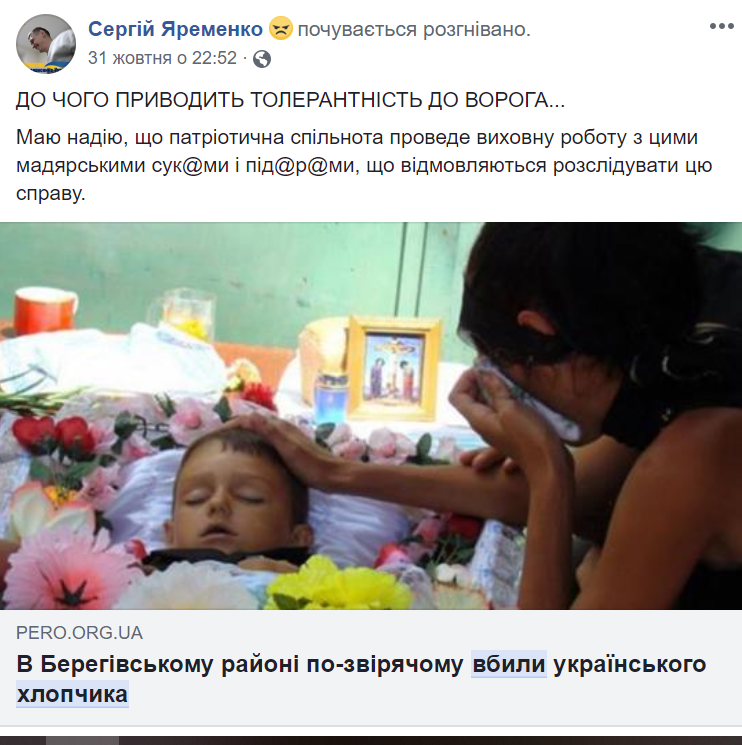 Despite the fact that this contains no specific facts, no names or dates, many social media users accepted the information as fact without any doubt.

Most likely the goal of spreading such false information is to incite ethnic unrest between Ukrainians and Hungarians living in Ukraine. The secession of Transcarpathia and local Ruthenian and Hungarian separatism is another favorite trope of the Russian disinformation machine, which StopFake debunks on a fairly regular basis.