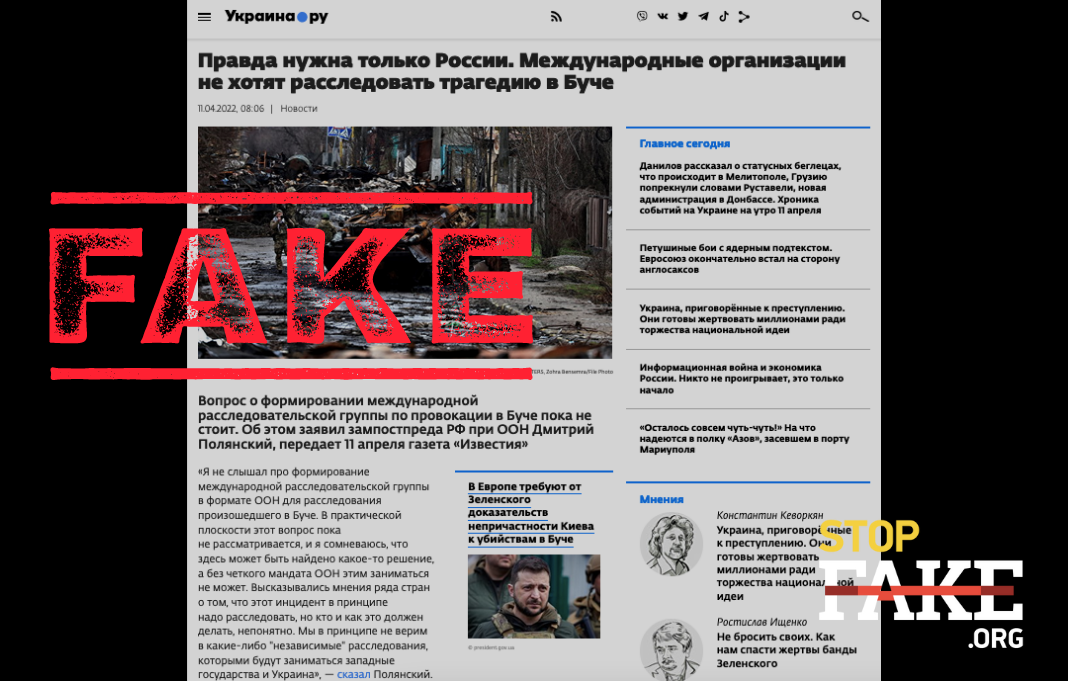 The Kremlin can’t seem to decide what position to take regarding the atrocities the Russian occupying troops committed in the Kyiv region. First they declared that the bodies with their hands tied behind their backs were staged and tried to shift the blame onto the Ukrainian army, and now they are claiming that no international organizations are willing to investigate the crimes that were committed in Bucha.

Dmitry Polyanskiy, the first Deputy Permanent Representative of Russia the UN said that the question of organizing an international group to investigate “the Bucha provocation” is not yet on the agenda and Russia “in principle, does not believe in any ‘independent’ investigation carried out by Western countries and Ukraine.”

Whatever Russian representatives say, the international community is determined to collect detailed evidence of who is responsible for the crimes committed in the Kyiv region and throughout Ukraine during the war.

42 countries have already filed a lawsuit against the Russian Federation in the International Criminal Court because of the war that Russia has unleashed against Ukraine. Together with other countries, Great Britain is also collecting evidence for the court. France and the European Union are providing financial and technical assistance to document the investigation of Russian war crimes in Ukraine. International Criminal Court Prosecutor Karim Khan confirmed that the court’s investigative team is already working in Ukraine.

According to the Ukrainian Security and Defense Council’s Center for Countering Disinformation “Based on the number of countries interested in seeing Russian held accountable, it is likely that the International Criminal Court and the International Court of Justice will not drag out the process”.

On April 11 a detachment of French technical and scientific gendarmes arrived in Ukraine to investigate war crimes committed around Kyiv. In addition, the European Union has allocated 7.5 million euros to train Ukrainian prosecutors in war crimes investigation techniques.

Evidence of crimes committed in Bucha is also being collected the office of the United National High Commissioner for Human rights and the international human rights organization Amnesty International.

International media have also been recording the crimes committed in Bucha and other areas occupied by the Russian military. The New York Times, for example, created a map of the killings of civilians in Bucha, documented the bodies of nearly three dozen people, where they were killed, in their homes, in forests, who was set alight in an empty parking lot and bore witness to more than 100 bodies in a mass grave.

On April 2 the Kyiv region was liberated from more than a month of Russian occupation. The Russian army left behind mass civilian casualties, and overwhelming evidence of rape and looting. Vadym Denysenko, an adviser to Ukraine’s Interior Minister told Radio Liberty that at least 400 people were killed in Bucha.

StopFake has debunked related Russian disinformation stories, such as the claims that mass civilian casualties were staged and that foreign journalists confirmed there were no civilian deaths or executions in Borodyanka.