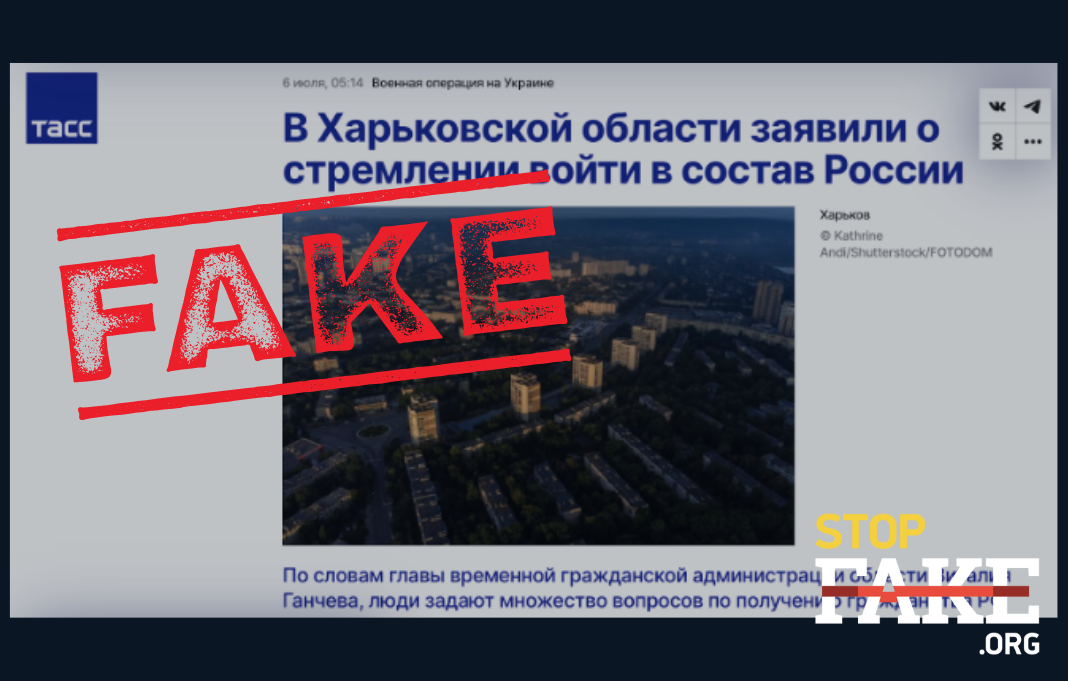 Kharkiv regional authorities have never expressed a desire for the region to become part of Russia, contrary to Russian occupying official’s claims. Appointed by the Russian authorities as the so-called “head of the temporary civil administration of Kharkiv province,” Vitaly Ganchev is accused of treason and collaboration by Ukraine. A recent poll by the reputable Kyiv International Institute of Sociology found that 82% of Ukrainians living under temporary Russian occupation, have a negative attitude towards Russia,  and 77% believe that under no circumstances should Ukraine cede any territory.

“The authorities and residents of liberated territories in Kharkiv province are striving for the region to become part of Russia. The provisional civil administration supports these attitudes,” said Russia’s Kharkiv region gauleiter Vitaliy Ganchev, and his message was immediately disseminated by Russian propagandist media, especially TASS, Life, EADaily, RIA Novosti, OSN, Channel Five and others.

Vitaly Ganchev was appointed by the Russian occupation authorities as the so-called “head of the temporary civil administration” in the occupied part of the Kharkiv region. In an interview with Russian official state news agency TASS, Ganchev claims that Kharkiv region residents who are living in “liberated” areas, (areas occupied by Russian forces), are adapting to new realities and want the region to become part of the Russian Federation.

“Our administration is aiming for Russia. And when people hear from the authorities that rule is being established here, there is a power vertical, they see the legislation we are enacting, they see the introduction of the ruble and how it is filling a key economic niche, people are already starting to reorient themselves” Ganchev said.

In fact, no Kharkiv region officials have ever made any statements about the region wanting to be part of Russia. Russian media have latched onto a phrase uttered by the quisling Ganchev and are passing it off as an indicator of the mood in the region. Russian authorities appointed Ganchev “head of the provisional civil administration of the Kharkiv region,” a fictitious position of a fictitious administration that has absolutely nothing to do with the official Ukrainian regional government.

Vitaly Ganchev is accused of high treason and collaborating with the enemy (Criminal Code of Ukraine, Article 111, part 2, Article 111-1, part 5). On April 21 the Kharkiv Regional Prosecutor’s office issued these accusations against him in absentia. According to the Prosecutor’s Office press service, Ganchev voluntarily agreed to cooperate with the invading Russian forces. The Kharkiv Regional Prosecutor’s office says “the suspect assisted the Russian military in the search for people living in the village of Kozatska Lopan who participated in Ukraine’s Anti-terrorist operation (term used during 2014-2018 for the military campaign in eastern Ukraine), for local volunteers and activists and provided the Russian military with equipment for constructing checkpoints”. During a regional city council meeting, Ganchev tried to convince local residents that they should be loyal to the Russian occupying forces and the Russian Federation as a whole.

The claim that inhabitants of the occupied sectors of the Kharkiv region wish to join Russia has absolutely no basis in fact. In early July, Oleh Sinehubov, the head of the Kharkiv regional military administration said that Russian invading troops temporarily control about 30% of the region’s territory – part of the border areas in the north, as well as the eastern regions from Volchansk to Izyum. According to the Kharkiv Regional Military Administration, ever since Russian troops occupied parts of Kharkiv province in early spring, thousands of people want to leave the area for territories under Ukrainian control. Despite constant shelling, Ukrainian authorities and volunteers continue to organize weekly evacuation routes.

Kharkiv region residents who managed to evacuate to Ukraine controlled territories, report incidents of massive looting and war crimes by the Russian army against the civilian population. Russian occupation troops continue to systematically violate the rights of the inhabitants of the Kharkiv region – they impede free movement, prevent evacuation to Ukraine controlled territory, creating conditions for yet another regional humanitarian crisis in Ukraine.

Despite Russian authorities calling the occupation of Ukrainian territory “liberation,” recent opinion polls show that residents of the occupied Ukrainian regions are extremely negative towards Russia. A recent study by the Kyiv International Institute of Sociology (KIIS) conducted on May 13-18, 2022, showed that the vast majority of citizens who continue to live in Russian occupied territory after February 24, 2022 have an extremely negative attitude towards Russia – 82%, only 6 % of respondents said they view Russia positively.

StopFake has debunked several Russian fakes about the Kharkiv region, particularly claims that Ukraine’s government was refusing to finance the region because it was occupied by Russia.