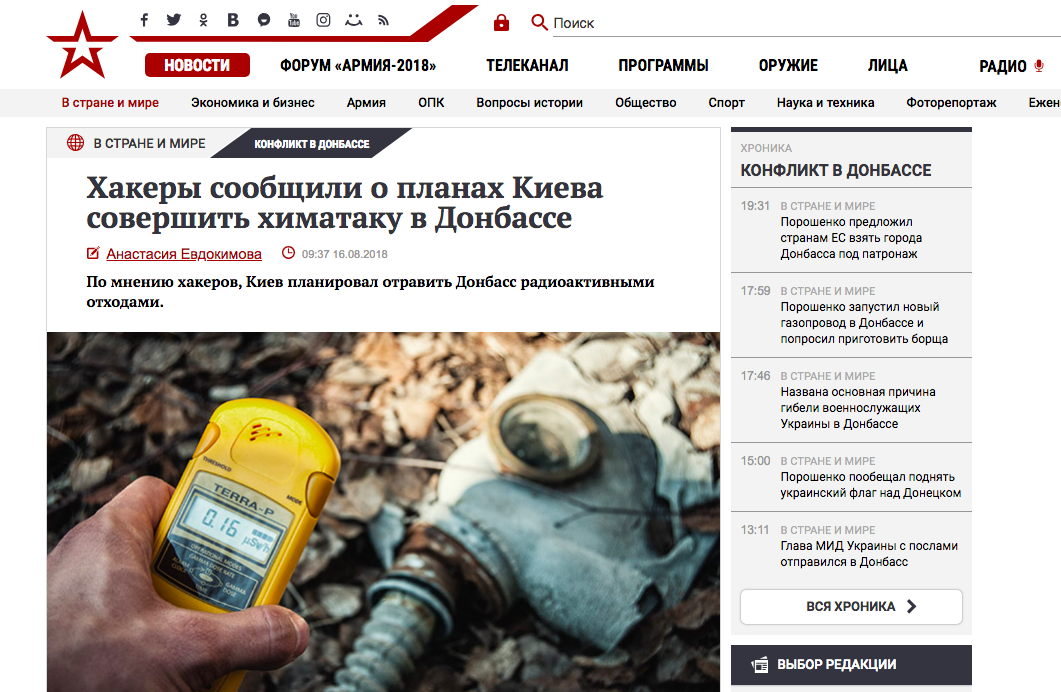 On August 15 Cyberberkut, a group of pro-Russian hackers announced that Ukraine, together with the help of  US secret services is preparing to use nuclear waste to poison the water supply of the Russian backed separatist controlled swathes of Luhansk and Donetsk territories. Russia’s Defense Ministry television channel Zvezda, Pravda.ru, Moskoskyi Komsomolets, the conservative monarchist orthodox site Tsargrad and many other Russian sites dutifully disseminated this fake. 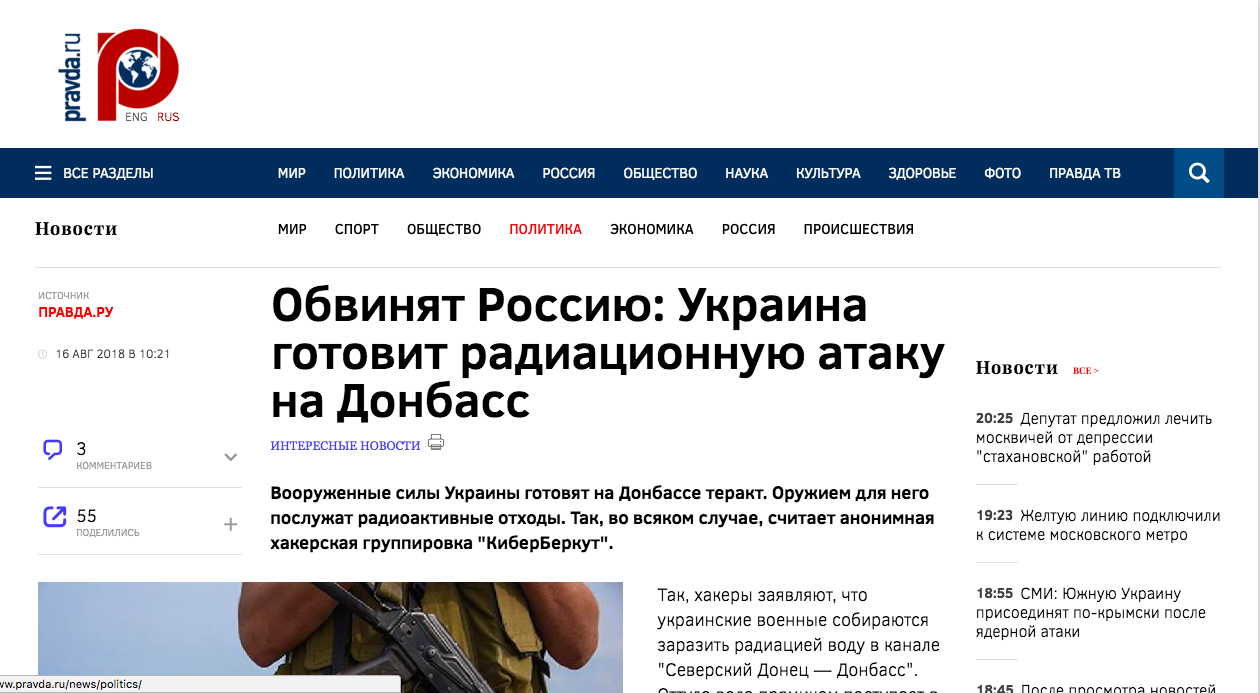 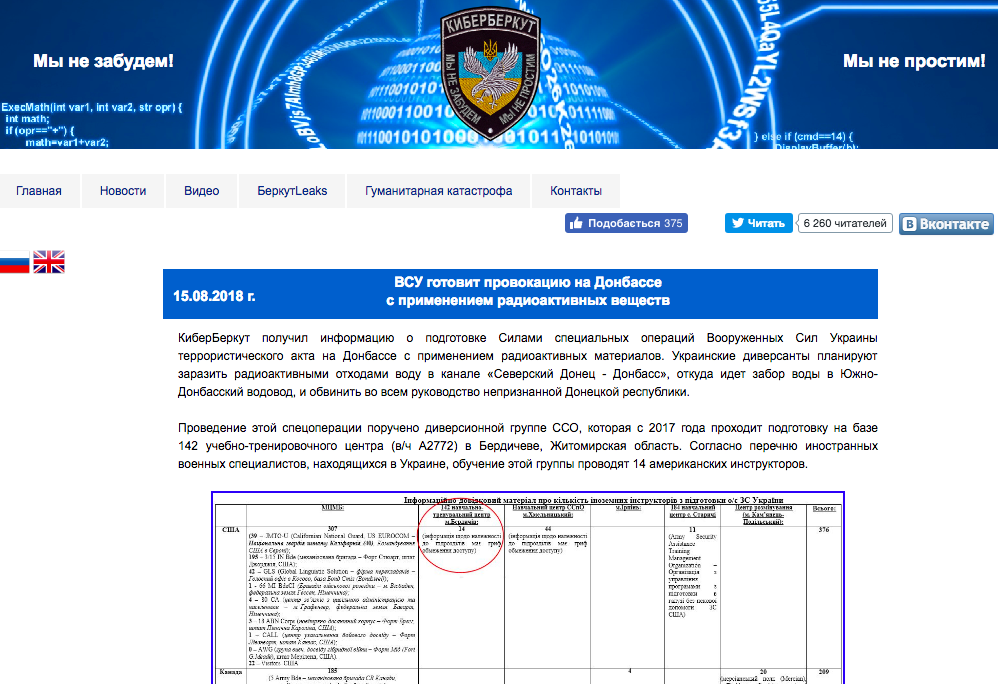 Cyberberkut claims that Ukrainian military are being trained for this operation by Blackwater founder Eric Prince and fourteen other US military instructors on a base in Berdychiv, Zhytomir province in central Ukraine. The article features several documents Cyberberkut uses to support their claim, including one that purports to document the transfer of a container filled with nuclear waste from the Vakelenchuk nuclear waste storage facility. Cyberberkut forgets to mention that the Vakelenchuk facility was decommissioned in 2017, all radioactive waste was removed and the site was replanted with foliage.

According to Cyberberkut the Ukrainian military allegedly want to dump the nuclear waste into the Siverskyi Donets-Donbas canal thereby contaminating the water supply of the occupied territories.

Hydrologist and chairman of the Ukrainian Academy of Sciences Hydrometereological Institute, Konstantyn Danko, told StopFake that Cyberberkut’s claims have several  inaccuracies and scientific inconsistencies. The story has no details about the alleged radioactive waste, no indication of the level of radiation or which radioactive isotopes threaten to contaminate the water canal. Furthermore, quite apart from moral considerations, Ukraine would never sanction such an operation as radioactive elements in the country’s water system would contaminate both the Azov and the Black seas and impact other countries’ shorelines, Danko pointed out.

“Water from the Siverskyi Donetsk canal flows into other river basins, including the Dnipro basin. Radioactive elements would not only contaminate groundwater but runoff into other rivers, through the Azov Sea, through the Kerch Strait and into the Black Sea. This would be a great environmental tragedy” Danko said.

Danko also criticized a map that the Cyberberkut article features in its story, seemingly showing the waterways of the Donetsk region that Ukraine is “planning to poison with nuclear waste”. In scientific terms the map and what it purports to show are nonsense.

Former spokesman for Ukraine’s General Staff Vladislav Seleznyov told StopFake that the alleged military letters that Cyberberkut includes as evidence of their claim are also fake, they do not follow the military protocols for official correspondence.

Political analyst Kyrylo Sazonov says stories such as this Cyberberkut fake are convenient for Russia. “Nazi propagandists maintained that the more outrageous the lie, the easier it is to believe in it and Russian propagandists are logically pursuing this principle, he said. Sazonov also noted that Donbas water resources really are under threat, but not because of “Ukrainian saboteurs” but because of the reckless actions of the militants in the occupied territories.

The Yunkom coal mine in Donbas was the site of a nucleartest explosion triggered to remove methane gas. This mine was like a time capsule, Sazonov explains, it was regularly pumped to remove water, but since these eastern regions have been occupied, no one is looking after this mine, it is flooded and the contaminated radioactive water presents a real danger. Another danger is the Nikitovskyi Mercury Plant where cinnabar, the bright red mercury sulfide ore from which silvery, liquid elemental mercury is derived was mined. This facility is also flooded and poses a real threat of potentially polluting the region’s water resources, Sazonov said.