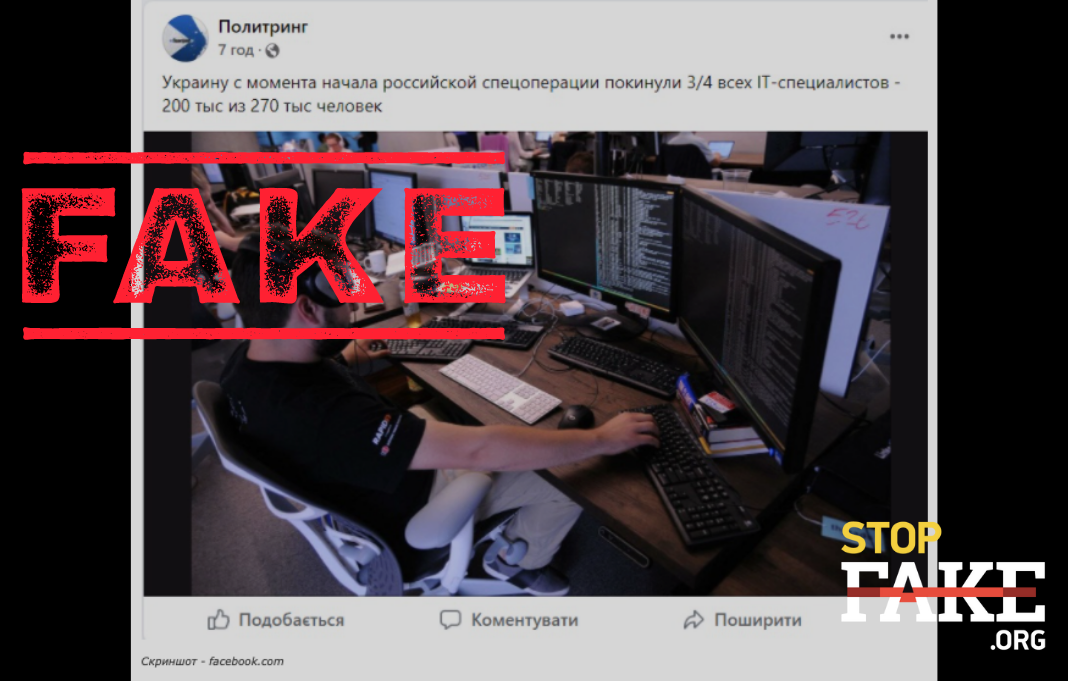 According to a survey carried out by the IT Ukraine Association, more than 70% of Ukrainian IT specialists work in parts of Ukraine that are safe, the remaining 16% who are mostly women, work abroad. These findings were confirmed by a survey conducted by the DOU IT portal which found that 61% of IT specialists surveyed moved to a safer place, 46% moved to safer places within Ukraine, 14% went abroad.

Russian media as well as some social media accounts are claiming that three quarters of all IT specialists in Ukraine – some 200,000 people, have left Ukraine since the outbreak of war. They claim their source for this information is the Ukrainian Ministry for Digital Transformation.

According to a survey conducted by the IT Ukraine Association, a professional organization uniting more than 75,000 IT specialists, since the beginning of the Russian invasion of Ukraine, more that 85% of IT specialists continue to work at their jobs. 2% of IT workers who had military experience joined the ranks of the Ukrainian military. The Association notes that since the outbreak of the war a certain relocation has indeed taken place, IT workers have moved from Ukrainian cities where war is raging to other parts of country where there is no war. According to the survey, more than 70% of Ukrainian IT specialists work in safe regions, the remaining 16% who are mostly women, have moved abroad.

The results of the IT Ukraine Association survey were published on March 23. The study involved 30 IT companies and more than 34,000 IT specialists.

This data is supported by another survey conducted by the IT portal DOU. The DOU study was conducted from March 23 through March 26 involving 6,812 Ukrainian IT specialists. 61% of those surveyed had to leave their home and move to a safer place due to the outbreak of war. Almost half of them – 46% moved to a safer place in Ukraine, another 14% left the country altogether and went abroad.

In reality there can be no mass exodus of IT specialists from Ukraine because the average age of a computer specialist is 28 years old; currently there is a war regulation in place that does not allow men aged 18-60 to leave the country. However, these restrictions are not applicable for certain categories such as single fathers, fathers of disabled children, care givers, etc.

In a March 25 interview with Forbes magazine, Mykhailo Fedorov, the Ukrainian Minister for Digital Transformation said there are some 300,000 IT specialists in Ukraine, a number that far exceeds the number indicated by the Russian media.

Minister Fedorov noted that the ministry is currently working on providing IT specialists exemptions from conscription as their work is strategically important for Ukraine, it generates income for the state coffers in the form of taxes. According to the IT Ukraine Association, a majority of companies have fully resumed working. Thanks to this, the IT industry remains financially stable and 77% of the IT companies in Ukraine have largely retained almost all their customers and contracts.

Earlier StopFake debunked Russian claims that 2.5 million Ukrainians are asking to be evacuated to Russia.