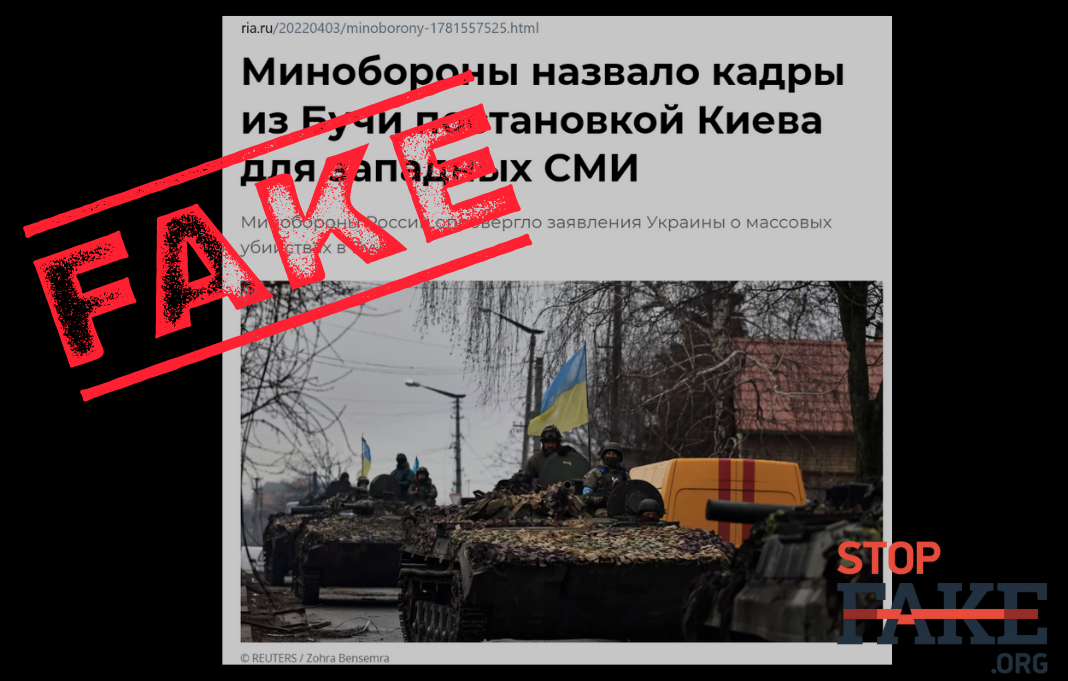 German language version of this story can be accessed here.

There is no doubt that Ukraine’s peaceful civilian population was subjected to extreme violence and brutality by the Russian military. Numerous local residents’ testimonies from Kyiv area towns that have been under Russian military occupation for a month confirm this. Some of them have already been documented by the international human rights organization Human Rights Watch.

After the publication of shocking footage from Kyiv region towns liberated from Russian military occupation, Russia’s Defense Ministry, the Kremlin media, as well as websites supporting Russia’s military actions, are actively spreading disinformation claiming the massacres of peaceful civilians by the Russian army are “staged by Ukrainian special services”.

Many of the propagandist stories being circulated online claim that the video from Bucha, which shows many corpses lying on the city’s streets, is supposedly staged, and the dead people are extras. Some visitors of those websites assert the dead are victims of atrocities allegedly committed by Ukraine’s territorial defense, and others mistakenly claim that Bucha was under Ukrainian control, and Russian soldiers could not have committed these crimes.

Alexander Kots, a well-known propagandist working for the Russian newspaper Komsomolskaya Pravda, writes that Ukrainian secret services work in the “style of the White Helmets,” which allegedly staged scenes of atrocities in Syria. This is not the first time that Kots has accused Ukrainian authorities of artifice and staging. In the past Kots has spread disinformation claiming representatives of the White Helmets arrived in Ukraine to prepare a false chemical attack. Another well-known propagandist Yegor Kholmogorov, claims that Kyiv came up with the “Bucha massacre” as a ploy to get heavy weapons from the West. “After Bucha, the West will definitely give us heavy weapons, and possibly aviation. Although all this time Western officials resisted and did not want to do this” Kholmogorov writes on Telegram, referencing to the anonymous Telegram channel “Legitimate”.

Kremlin propagandists devoted most of their attention to the video from the liberated city of Bucha, which was made public by attorney lIlya Novikov. The people lying on the streets are extras, they are acting, the propagandists say. “The video with the bodies is puzzling: here, at 12 seconds, a “corpse” on the right moves its hand. At 30 seconds, in the rear-view mirror, a “corpse” sits down,” writes the pseudo-fact-checking project “War on Fakes”, which is then quoted by the Russian Defense Ministry, seemingly giving the fake claim some perverse legitimacy. However, these statements do not stand. A better-quality video clearly shows that what the propagandists call “a movement of the corpse’s hand” is actually a drop of water on the windshield, and the “movement of a body from behind” is nothing more than distortion in the rearview mirror.

In addition, Reuters photojournalists also visited Bucha. In one of their photos, you can see the street where the video was filmed. The position of the bodies along the street is identical in both cases, which also rules out staging.

It is noteworthy that the “fact-checking” of the Bucha video was also criticized by some pro-Russian viewers.

Russian troops subjected Ukrainian civilians to savage violence, this is beyond doubt and is corroborated by numerous Kyiv region local residents’ testimonies. In particular, the mayor of Bucha, Anatoly Fedoruk, reported the discovery of a mass grave where 280 civilians were buried, and that dozens of corpses lay on the streets, some of them with their hands tied behind their backs and with signs of torture.

At the moment, the international human rights organization Human Rights Watch began to document the war crimes the Russian military committed on the territory of Ukraine. The organization has already documented several cases of Russia’s army violating the laws of war in the Chernihiv, Kharkiv and Kyiv regions. These documents contain the testimony of eyewitnesses during the period of February 27 through March 14.

The violent deaths of the civilian population were also recorded by international photojournalists who were among the first to visit towns that had been held by Russia’s military – Reuters, AFP News Agency, Associated Press. An AFP correspondent reported that 16 of the 20 bodies he saw were on the sidewalk or near the curb. Three more victims were in the middle of the road, and one was in the yard of a destroyed house. An open Ukrainian passport lay next to one of the bodies.

Ukrainian journalist Dmytro Komarov, who published a video report from Bucha on YouTube, also confirms the violent death of scores of civilians

Kremlin propagandists are denying the involvement of the Russian military in these mass killings of civilians. They point out that in photographs and videos from the liberated territories one can see that some of the bodies have white armbands – this is the armband color used by the Russian military as an identification mark. Propagandist Alexander Kots said that the white bands on the sleeves indicate that these people went over to the side of the Russian army and were allegedly shot by Ukrainians forces for “collaborating” with invading Russian troops. However, these claims are refuted by Ukrainian intelligence and evidence from local populations that survived the occupation. The Russian military forced the civilian population to wear white armbands, this was recorded in interviews with local residents by at least two publications – Reuters and Suspіlne.Novyny. Earlier, the fact that the Russian military put white armbands on the inhabitants of Mariupol was also reported in the Azov regiment. This is how Russian soldiers hid behind civilians.

According to the Conflict Intelligence Team, a volunteer group that investigates military conflicts, they are quite sure that it was either the Russian Army or the Russian National Guard that perpetrated the killings. Russia’s Eastern Military District, as well as the 76th Airborne Assault Division and the 98th Airborne Division, may be involved in the crimes. Russian National Guard equipment was found in the Kyiv region and ‘kadyrovtsi’, the Chechen leader Ramzan Kadyrov’s fighters were present at the Hostomel airfield 55 kilometers northeast of Kyiv. The Conflict Intelligence Team also notes that the 104th parachute regiment of the already mentioned 76th airborne regiment could have operated directly in the Bucha area. In addition, at least two soldiers from the 234th regiment of the same division were present in the Bucha area, where one of them was captured and another killed.

The Russian Defense Ministry declared that the photos and videos from Bucha are a provocation against Russia, and that during the time the city was controlled by the Russian military, not a single civilian suffered from any violent actions. The fact that photographs and evidence of crimes began to appear only on the fourth day after the liberation of the city, proves that the mass civilian casualties are a provocation, Russia’s Defense Ministry maintains.

However, this is not true. The Ukrainian military entered Bucha, Vorzel and Hostomel only on April 2. On March 31, the Kyiv military administration reported that these settlements were still controlled by Russian invading forces, and subject to artillery fire. Independent experts began to record evidence of war crimes against the civilian population in this area from the beginning of March, even before Ukrainian troops retook the towns. These records can be viewed using an interactive map created by the investigative journalism group Bellingcat and the Global Authentication Project of open source researchers.

Ukraine’s National Police have launched an investigation into the events in Bucha and the area is now considered a crime scene.

A Bulgarian translation of this story can be accessed here.