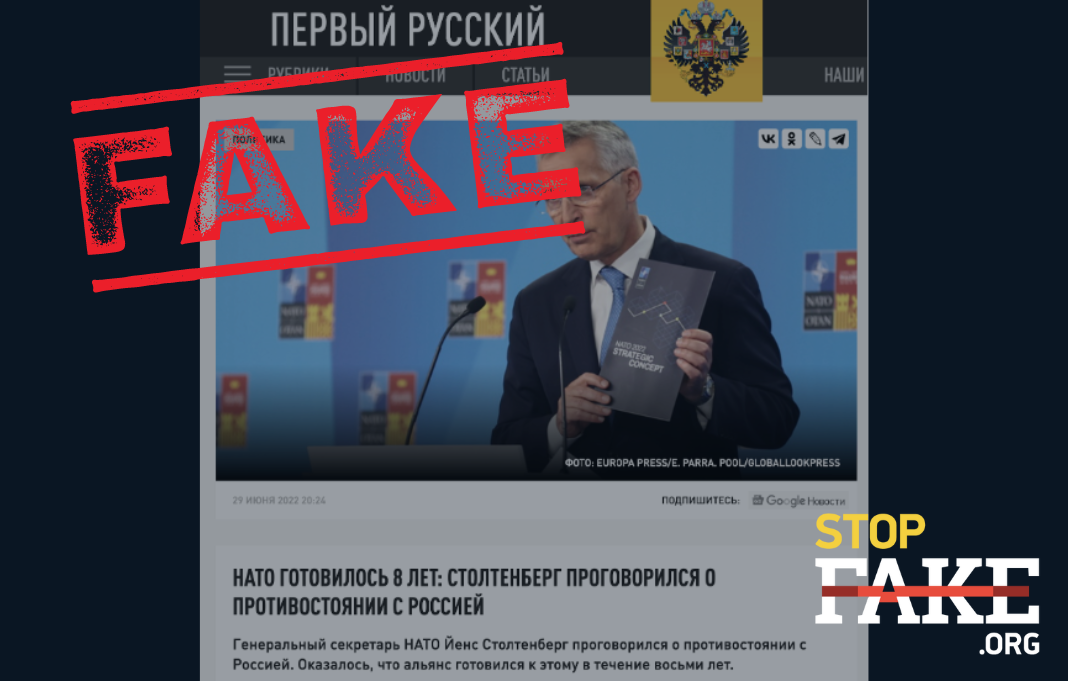 Jens Stoltenberg has never said anything about any eight-year preparation for war with Russia, nor about NATO’s plans to “attack” Russia. The NATO Secretary General talked about the foundations of European security, which the Kremlin undermined in 2014 by occupying Ukrainian Crimea and seizing parts of the Luhansk and Donetsk regions.

Russian media continue to try to justify Russia’s invasion of Ukraine, producing disinformation about “anti-Russian Western aggression.” The latest version of this narrative is claiming that NATO Secretary General Jens Stoltenberg “let slip” that the North Atlantic Alliance had been “preparing for war” with Russia for eight years, and that NATO really is a threat to Russia. These alleged slips of the tongue happened during Stoltenberg’s press conference after the last NATO summit in Madrid.

To create this latest fake, the Russian propaganda machine resorted to their standard manipulation/distortion technique. They took a phrase out of context, enhanced it with conspiracy theory details, added the phrase “slip of the tongue” and turned Stoltenberg’s words into something ominous.

The NATO leader never said anything about any eight-year long preparation for war with Russia, nor anything about NATO plans to attack the country. Stoltenberg was talking about the foundations of European security, which were under threat because of Russia’s actions. After Russia attacked Ukraine in 2014, seeing Russia’s aggressive ambitions, NATO began strengthening its defenses. “When the world starts to change, NATO also has to change,” Stoltenberg emphasized.

“We have actually prepared for this possibility for a long time. It’s not as if NATO suddenly woke up on the 24th of February and realized that Russia was dangerous. This invasion was predicted, very precisely, by our intelligence services. We shared publicly those intelligence reports, back, last fall, and very precisely predicting that Russia was building up and planning to invade Ukraine. So what we predicted happened. Of course, we worked hard to the very end to try to prevent that from happening. We met with Russia, we engaged with Russia, but they continued with their plans and they invaded Ukraine. And the reality is that we have also been preparing for this since 2014. Because that’s the reason why we have increased our presence in the eastern part of the Alliance, why NATO Allies have started to invest more in defense, and why we have increased the readiness. And also, why we have now, for some time, worked on a new Force Structure, “ Stoltenberg said.

During the Madrid summit Stoltenberg once again refuted Russia’s narrative about NATO’s intentions to attack Russia. The Secretary General also stressed that the Alliance would continue financial and military support to Ukraine, increasing its ability to repel Russian aggression. Stoltenberg also noted that NATO is not a party in the Russian war against Ukraine.

NATO has repeatedly emphasized that the Alliance is in no way directed either against Russia or any other state. Dozens of times NATO leadership has pointed out to the Russian authorities that Alliance goals are set out in the preamble to the 1949 Washington Treaty. NATO’s founding document states that Alliance countries “are determined to join their efforts in order to create collective defense and maintain peace and security.” Thus, the main mission of NATO is not to start wars, as Russian propaganda writes, but the stability of the participating countries and their defense in the event of a conflict, unlike Russia, which deliberately unleashes military conflicts on the territory of other countries, as happened in the case of Ukraine.

It was Russia’s aggression against Ukraine in 2014 that prompted NATO to revise the standards of its collective security. After Russia attacked Ukraine in 2014, the Alliance responded by strengthening its presence on the eastern flank, with four battalion-sized battlegroups in Estonia, Latvia, Lithuania and Poland. After Russia invaded Ukraine on February 24, 2022, NATO countries agreed to create four more battlegroups in Bulgaria, Hungary, Romania and Slovakia. Russian aggression led to previously neutral Finland and Sweden applying to join NATO. The Alliance is expediting both applications.

The expansion of NATO’s military presence in countries bordering Russia took place after Russia invaded Ukraine. It was Russia that provoked the NATO states to strengthen their positions in the border zones. The Kremlin, hiding behind the narrative of “saving Russian lands from an aggressive NATO”, ensured that the Alliance really switched to a more active defense policy.

Furthermore, after Russia’s unprovoked invasion of Ukraine in February 2022, NATO member countries revised their Strategic Concept. The North Atlantic Alliance recognized Russia as “the most significant and direct threat” to security in Europe. The alliance has accused Russia of systemically using coercion, destructive activity, aggression, annexation and nuclear blackmail as instruments of foreign policy.

Specifically for Russia’s leadership, experts and journalists who repeat their disinformation claims about NATO aggression ad nauseum, the Alliance wrote out point 9 in the 2022 Strategic Concept, which reads as follows:

NATO does not seek confrontation and poses no threat to the Russian Federation. We will continue to respond to Russian threats and hostile actions in a united and responsible way. We will significantly strengthen deterrence and defense for all Allies, enhance our resilience against Russian coercion and support our partners to counter malign interference and aggression. In light of its hostile policies and actions, we cannot consider the Russian Federation to be our partner. However, we remain willing to keep open channels of communication with Moscow to manage and mitigate risks, prevent escalation and increase transparency. We seek stability and predictability in the Euro-Atlantic area and between NATO and the Russian Federation. Any change in our relationship depends on the Russian Federation halting its aggressive behavior and fully complying with international law.