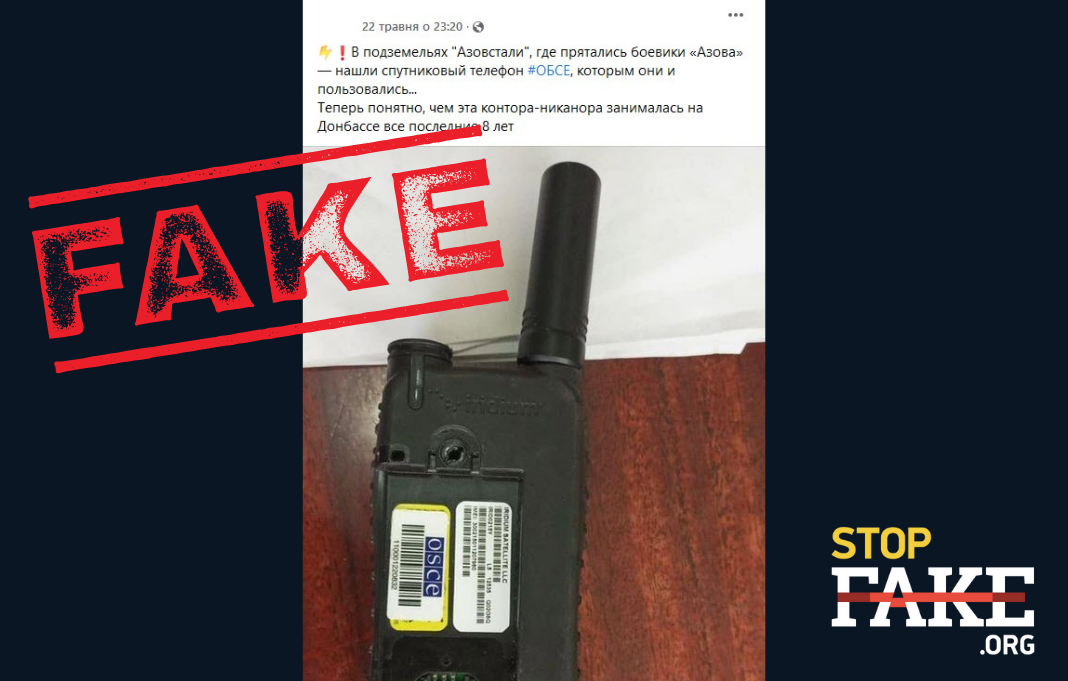 The OSCE has categorically denied that it provided communications and intelligence to the Ukrainian military based in the Azovstal plant in Ukraine’s southeastern port city of Mariupol. OSCE representatives emphasized that they never provided any additional information, except for open-source official reports, and did not support any of the parties to the conflict.

Information is being disseminated on social media networks and websites that the Organization for Security and Cooperation in Europe (OSCE) allegedly provided the Azov Regiment with communications and intelligence in Mariupol. The evidence for this, according to the posts, is a satellite phone found at Azovstal with an OSCE sticker. Alexander Khodakovsky, the commander of the so-called Donetsk People’s Republic Vostok battalion claims that “the discovery of this device in the catacombs of the plant indicates that members of the organization are helping the fighters of the Armed Forces of Ukraine.”

Russian media quotes Khodakovsky as saying “All these years, we suspected the OSCE of assisting the enemy. We were sure that their cameras, abundantly scattered along the line of contact, allegedly to monitor compliance with the ceasefire regime, actually transmit information to the enemy about our actions.”

Claims that the OSCE allegedly provided the Ukrainian military at Azovstal with intelligence and communications or helped the Ukrainian Armed Forces in any way is simply not true.

Responding to StopFake’s request to clarify the situation, the OSCE Office in Ukraine categorically denied claims that they provided the Ukrainian military in Mariupol or anywhere else with any assistance. Since March 2014, the OSCE Special Monitoring Mission, acting in accordance with the principles of transparency and impartiality, has been monitoring and reporting on the security and human rights situation throughout Ukraine, especially in the conflict-affected areas. The Mission’s findings are published in daily reports, which can be found on the organization’s website. The mission did not provide anyone with any additional information, except for official reports, and did not support any of the parties to the conflict, the OSCE emphasizes.

According to the OSCE, since the outbreak of hostilities on February 24, 2022, the Mission has noted increasingly hostile public rhetoric against the OSCE SMM, especially in areas not controlled by the government of Ukraine. “False, unsubstantiated and increasingly outrageous allegations are being circulated about the SMM, which have been debunked by the OSCE. With regard to Mariupol, due to the ongoing hostilities, the SMM has not controlled its office there since March,” an OSCE representative said.

In addition, at the end of May 25, a demand by the OSCE Chairman, Polish Foreign Minister Zbigniew Rau and OSCE Secretary General Helga Maria Schmid to immediately release the four members of the Mission detained in Donetsk and Lugansk appeared on the OSCE official website.

“The constant accusations leveled against members of the SMM are becoming more and more outrageous. Our detained colleagues are being held unreasonably and must be released immediately. This targeted campaign against the SMM and any intimidation or harassment of current or former OSCE staff must stop immediately,” the statement said.

As for the telephone supposedly found at Azovstal, there is no evidence that the device actually was on the territory of the steel plant or that it was used by the Ukrainian military. Most likely the telephone which is being passed off as a communication device of the Azov regiment, was found in the OSCE office in Mariupol, now under control of the Russian army.

StopFake continues to expose fakes about the West’s alleged participation in Russia’s war against Ukraine and about the Azov battalion in the stories such as Fake: Kyiv and the EU worsen the situation of farmers in the Kherson region, Fake: The West is lying about the theft of Ukrainian grain by Russia, Fake:  Azov Regiment attacked a humanitarian convoy.