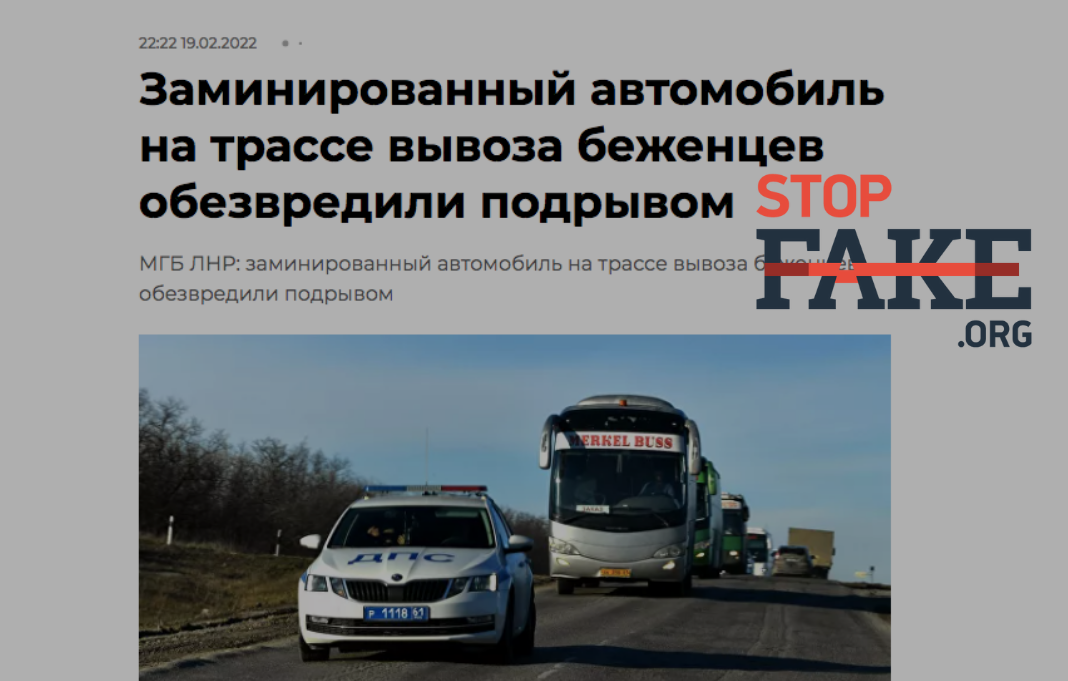 The Kremlin propaganda machine continues churning out fakes to justify Russia’s aggression against Ukraine. On February 19 several pro-Kremlin media disseminated stories claiming that a car bomb had been discovered in the Russian controlled territory of Luhansk. According to the fake, the car was left in a place where the self-proclaimed Luhansk People’s Republic was evacuating people to Russia. The car in question was under a railway bridge on which, according to the fake narrative, “in an hour a train filled with evacuated women and children on their way to the Russian Federation was meant to pass”.

The source for this story was none other than the “State Security Ministry” of the self-proclaimed Luhansk People’s Republic (LPR). On February 19 the “Ministry” posted the story on its site, claiming the car was found 500 meters from the village of Samsonivka, on the Luhansk Izvarino highway. (Samsonivka is a village of some 1000 people approximately 120 kilometers southeast of Luhansk.)

Seemingly to provide evidence for to their claim, the “Ministry” posted a poorly edited video in which we are shown the car in question. The 1.13-minute video, shot from a variety of wide vantage points, features two armed men in camouflage gear with a dog, walking down a highway.  They appear to examine the car and in the next frame we see the car being pulled by a truck into what seems to be an empty field. The video ends in darkness with the sound of a faraway explosion.

Did the car really contain a bomb? Unfortunately, we will never know for certain as the video shows very general footage, the alleged car explosion takes place under darkness and at a great distance. However, the place where the car was found does provide some clues.

This manufactured story claims that the booby-trapped car was found “500 meters” from Samsonivka. According to official maps, there really is an intersection of a rail line and a highway at this distance. However, according to official maps, at this intersection, the railway line passes under the highway. In the published video however, the railway line passes over the highway. This is clearly visible in the video provided by the LPR “Ministry”.

We continued searching for the place the militants showed on the video and found it not 500 meters away from Samsonivka, but actually 1.2 kilometers away from the village. It is clearly visible on Google maps that the railway passes over the road at this point.

As for the militants’ thesis that the alleged explosives in the car were intended to blow up a railway overpass and a train that within the hour would be carrying “women and children”, the geography of the spot proves the claim to be completely ridiculous and false. Google Maps clearly shows that the railway tracks in this particular spot where the car was placed, end in two heavily industrial zones, (Google Maps screenshots 4 and 5) and do not pass through any settlements at all.

It is also worth noting that on February 19 the militants announced that only one train was bound for Russia. LPR chairman Sergei Kozlov announced that the train would leave Luhansk with stops in Alchevsk and Sverdlovsk (on the border with Russia). If the train departing Luhansk en route to Alchevsk somehow passed over the bridge near Samsonivka, featured in the militants’ poorly produced video, the train would in fact be returning. In their hurry to produce yet another fake video, Russian militants occupying Luhansk simply got it wrong, they featured a railway bridge leading to nowhere.

Fakes such as this poorly produced video are becoming ever more frequent. A few days ago Stopfake debunked a Russian fake claiming Ukrainian military were about to use chemical weapons in Donbas.