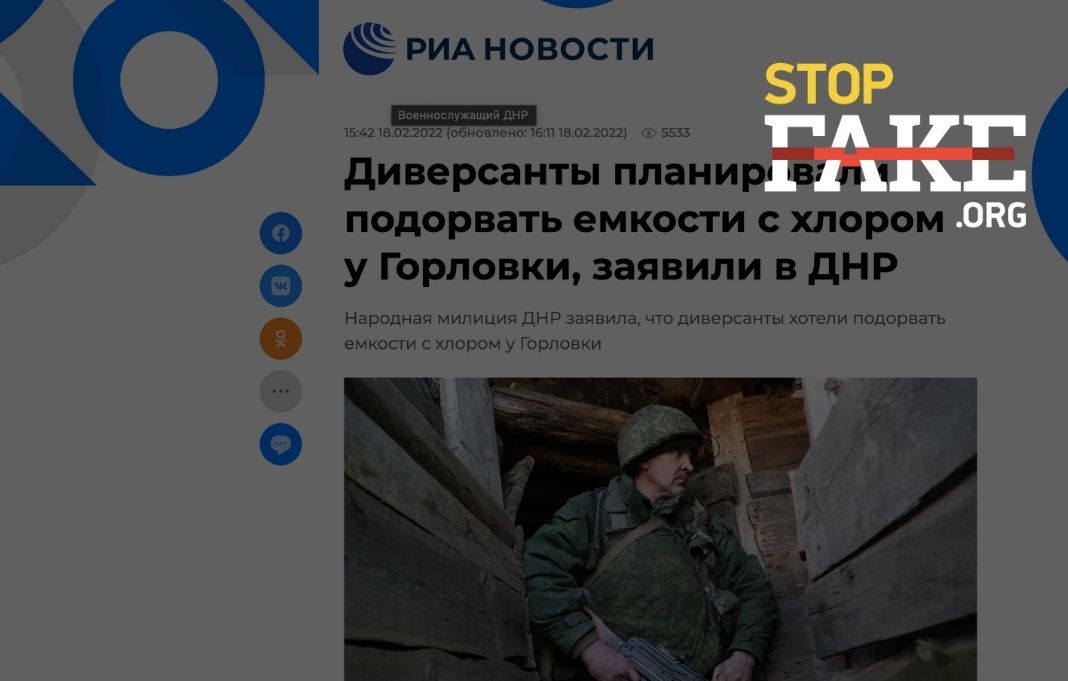 Against the backdrop of a possible full-scale Russian offensive against Ukraine and the growing escalation of the conflict in Donbas, Russian propaganda have once again dusted off one of their classic narratives about a Ukrainian chemical attack. Pro-Kremlin media have been awash with stories claiming that “Ukrainian saboteurs tried to blow up chlorine storage containers at a sewage treatment plant in the Horlivka area”. (Horlivka is a regional mining center some 40 kilometers northeast of Donetsk.) At the same time other Russian publications are warning about yet another “Ukrainian sabotage group” which allegedly tried to blow up tanks storing ammonia at the Horlivka Stirol fertilizer plant.

Ukraine is not involved in any chemical sabotage on the Russian occupied sectors of the Donetsk and Luhansk regions. As Moscow’s rhetoric heats up and ever more Russian troops amass on Ukraine’s borders, Russian media continues raising the ante and destabilizing the information space, looking for a pretext for a full-scale invasion of Ukraine.

Over the past two weeks Western intelligence services have repeatedly warned that Russia is planning to fabricate a pretext for invasion. A day (February 17) before the appearance of a fake about “Ukrainian sabotage groups” in Donbas, US Secretary of State Anthony Blinken outlined a plan for Russia’s attack on Ukraine at the UN Security Council. Blinken said that the Kremlin would stage or even carry out “sabotage” using chemical weapons to justify an attack on Ukraine.

“…in response to this manufactured provocation, the highest levels of the Russian Government may theatrically convene emergency meetings to address the so-called crisis.  The government will issue proclamations declaring that Russia must respond to defend Russian citizens or ethnic Russians in Ukraine” Blinken said.

On February 18 Valeriy Zaluzhnyi, Ukraine’s Commander-in-Chief categorically rejected all Russian accusations of sabotage in the Donetsk and Luhansk occupied regions. He emphasized that Russia is spreading implausible fakes solely for its own purposes – to escalate the situation.

“Information about Ukrainian military sabotage groups allegedly planning to blow up chlorine containers at the Horlivka sewage treatment plant do not correspond to reality,” Zaluzhnyi said.

Ukraine is not attempting and never has attempted any attacks on the occupied territories – neither a military offensive, nor chemical sabotage, not only because of humanitarian considerations, but also because of the country’s geography. Any chemical or radioactive activity on the part of Ukraine’s military will not only affect the territory captured by Russia, but also the regions controlled by the government. Volatile poisons can be carried by the wind for kilometers, and heavy chemicals can contaminate soil and water. A chemical attack cannot only affect the Donetsk and Luhansk occupied areas; the poisons will spread to the rest of the country under Kyiv’s control.

Last month Ukraine’s intelligence services warned that containers the Russian military had brought into Ukraine and deposited on the grounds of the Stirol fertilizer plant, were leaking ammonia. The Ukrainian Defense Ministry’s Intelligence Section then emphasized that “a man-made disaster can be used to accuse Ukraine of using toxic chemicals as a pretext for expanding armed aggression against Ukraine”.

Russian media began circulating fake claims that Ukraine is allegedly preparing a chemical attack on its own territory at least four years ago. In 2018 publications such as Moskovskyi Komsomolets, Pravda and Zvezda disseminated stories claiming that “Ukraine, together with American secret services were preparing radioactive sabotage on the Donbas water supply”. It is hard to imagine a more absurd bit of disinformation than this claim. After all, the water supply system for the Donetsk and Luhansk regions stretches for 260 kilometers and most of the water bodies not only pass through the frontline, but also through the occupied territories, as well as regions controlled by the Ukrainian government. If there was any water contamination not only the occupied territories would be affected, but those controlled by Kyiv as well. Poisonous elements having entered the water system will contaminate most of Ukraine’s territory and end up in the Black and Azov seas. Countries bordering on these water bodies, including Russia, would all be affected.

For a country that keeps accusing Ukraine of planning chemical attacks, Russia conveniently forgets its own association with the use of chlorine gas. In February 2018 chlorine gas was dropped on the Syrian city of Saraqib. In April 2018, another Syrian city, Douma, was targeted by chemical attacks twice. The government forces of Bashal al-Assad and their allies were behind all these attacks. Syria’s main ally is none other than Russia.