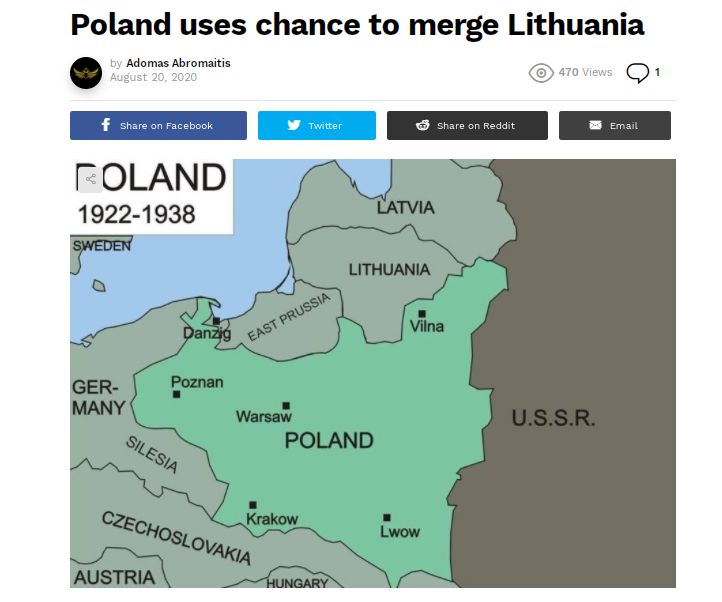 The English propagandistic portal “The Duran” is spreading false information that Poland is trying to incorporate Lithuania into its territory. In the article “Poland uses chance to merge Lithuania” published 20th July 2020 we can find only two true information: signing of the declaration of expanded military cooperation between Poland and USA (Poland – United States Enhanced Defense Cooperation Agreement) and creation of the Lublin Triangle (the platform for tri-lateral cooperation). All the remaining information, just like the title of the article, are utterly false.

The deal between Poland and United States was signed in July 2020 during the visit of the US secretary of state Mike Pompeo in Poland. It concerned the increase of the number of US troops in Poland and the creation of a unit responsible for commanding the military forces in the eastern flank of NATO, the V Corps Headquarters (Forward).

The Lublin Triangle created in Lublin on 28th July 2020 by the ministers of foreign affairs of Lithuania, Poland and Ukraine is an initiative which goal is the development of political, economic and social cooperation between those countries and help Ukraine regain its territorial integrity and integration with European Union and NATO.

According to the author of the article “Poland uses chance to merge Lithuania”, Poland has territorial claims in Lithuania, because during the interwar period the vast majority of Lithuanian territory belonged to Poland. In the light of that, the concurrent signing of the military pact with United States as well as creation of Lublin Triangle is a part of the process heading towards political and military dependency of Lithuania from Poland, “in which the last step can be territorial merger of Lithuania with Poland under the pretense of united effort against Russia”; all of this because Lithuania was supposedly “always under the Polish geopolitical sphere of interests”.

Further divagations on the subject of alleged attempts at absorption of Lithuania by Poland spinned by the author are based on the sixteenth century historical Polish-Lithuanian Commonwealth that became in twentieth century the Second Polish Republic. Naturally, he doesn’t mention that Polish-Lithuanian Commonwealth had ceased to exist because of the partition pacts signed between Russia, Prussia and Austria in 1795, nor does he describe the circumstances in which it had been revived – the Polish-Bolshevik war of 1919-1920 to  mention just one. It suffice to quote that the author claims: “Polish authorities have decided that it was time to rebuild the Polish-Lithuanian Commonwealth” on their terms and under its government. All the while the Lithuanian authorities are “seemingly unaware of Poland’s plans” and they are “sacrificing the future of Lithuania” just to gain short term benefits in financial and military aid from the US and the status of an ally.

The thesis of the alleged territorial attempts against Lithuania is later on expand to Ukraine and Belarus. Polish stand on the situation in Belarus described as meddling in the internal affairs of its neighbours is supposed to be the proof:

“Poland as a leader of the new structure could dictate its will and interfere in all political process in these countries. It is interesting that Poland has also territorial claims to Ukraine and even to Belarus. Part of Belarus territories were also under Polish jurisdiction for some time. Today the EU member states, including Poland and Lithuania try to be educators for Belarus. It is obvious that Belarus authorities consider instructive statements as interference to internal affairs. Pressure on Minsk in modern conditions could provoke its neighbour Russia for deploying troops on the territory of Belarus. In this case, Poland’s plans to restore “historical” borders could provoke military conflict between the East and the West. And Lithuania could become a victim of Poland ambitions.”

The argument based on false thesis is false in its entirety. However that doesn’t bother “The Duran”. What doesn’t bother them either is the comment, filled with hatred, of one of the readers posted below the “article”, in which Poland as well as Lithuania were defined simply as “shit”.

It is not especially surprising that “The Duran”, according to the Media Bias Fact Check, is extremely one-sided and highly unreliable source of information, which multiple times was publishing texts of propagandistic nature and spreading conspiracy theories. Its standard includes complete lack of transparency and posting of fake news.

The owner of “The Duran” is the Cyprus company DRN Medial PLC., which president is Alex Christoforou, originally from Moscow. The company is getting its earnings from advertisements and donations collected via PayPal and Patreon. Furthermore, the company has an online shop with gadgets featuring the logo of the portal – two-headed golden eagle, same as in the coat of arms of Russian Federation.