Poland has agreed to the deployment of additional US troops on its territory because of “old historic scores” with Germany, Russian pro-Kremlin media announced last week. Looking to increase its influence in Eastern Europe Warsaw is resorting to fairy tales about Russian aggression that even Poles do not believe RT  declared, while RIA Novosti accused Poland of “indulging its American masters’ whims”, intensifying military threats in Europe and of course, of Russophobia.

Warsaw does not believe that in its current form NATO is a working organization and is trying to rebuild the bloc according to its interests. The Polish authorities are betting on American influence, with whose help they are counting becoming leaders in Eastern Europe” Russian military expert Ivan Konovalov told RT.

The recent wave of Russian negative press about Poland began in June of this year when Polish President Andrzej Duda visited Washington, where he signed a Joint Declaration on Defense Cooperation with President Donald Trump. Russian ire only grew when Polish Foreign Minister Jacek Czaputowicz announced that the presence of US military on Polish soil was an important deterrent and should prevent any aggressive actions on the part of Russia. “Russia will think twice before using military force if they see the presence of foreign troops, particularly American ones” Czaputowicz said. 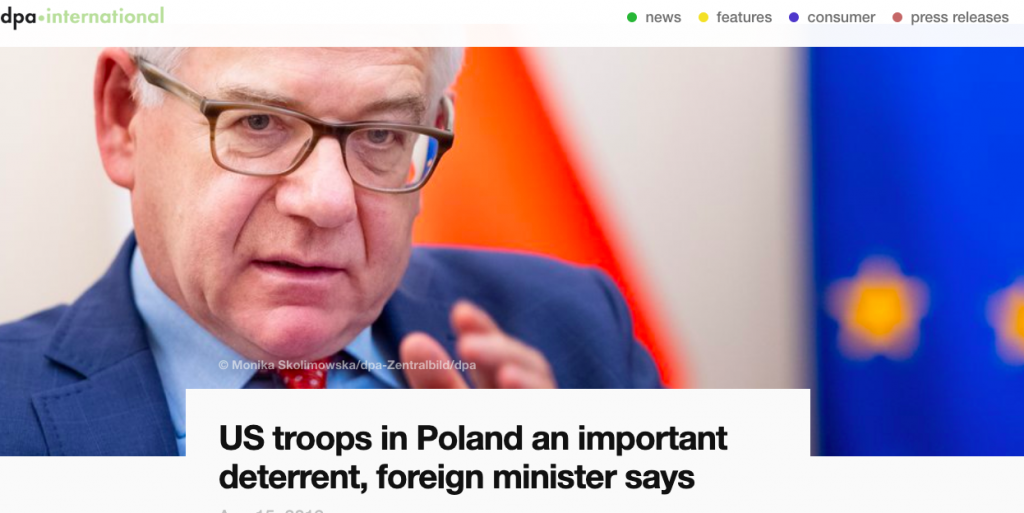 These American troops will strengthen Poland’s and Europe’s common defense and act as a deterrent against an aggressive Russia, Czaputowicz noted. Poland has no ambitions to increase its influence in Europe, and unlike Russia, who invaded Ukraine’s Crimea peninsula and occupied eastern Donbas, Poland has not invaded anyone. It is in the face of Russia’s aggression that Poland is seeking greater security by expanding the contingent of US troops on its territory.

Czaputowicz stressed that NATO’s main defense forces would still remain in Germany and the contingent deployed in Poland will be much smaller than the 35,000 US troops based in Germany.

In an interview with the Polish national newspaper Rzeczpospolita, Czaputowicz said the decision to increase the military presence in Poland and the Baltic countries was taken at a NATO summit three years ago in response to Russia’s seizure of Ukrainian territories. Therefore, the decision to increase US troops in Poland was a collective NATO decision and not a singular Polish initiative, as Russian propagandist media claim. 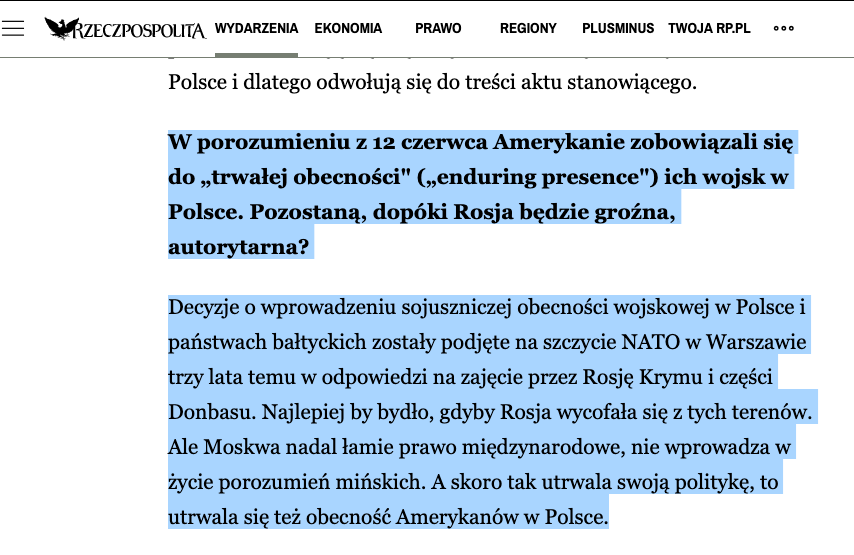 According to Poland’s Defense Minister Mariusz Błaszczak NATO troops are not intended for attacks on other countries, but rather they are a deterrent against possible military threats, in this case, from Russia.