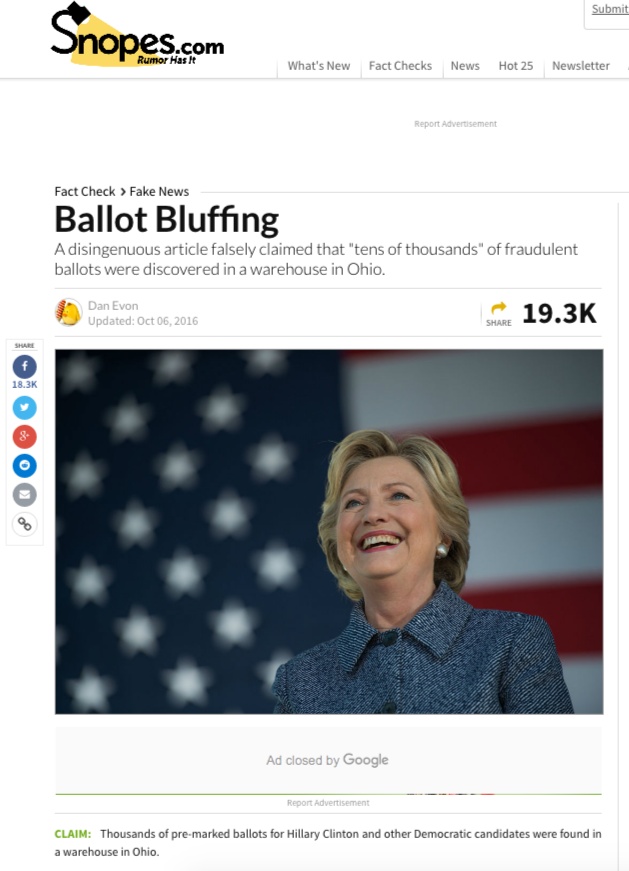 A fake news story published on the American Christian Times Newspaper web site claiming that “tens of thousands” of pre-marked ballots cast for Hillary Clinton were discovered in a warehouse was widely disseminated by both Ukrainian and Russian media this week.

The fake story was quickly debunked in the US, nevertheless, the Ukrainian sites Vesti, News 24UA, as well as many  Russian sites such as Pravda,  Politekspert, News Front continued to run it.

The Christian Times Newspaper, which has previously been cited for publishing unsubstantiated claims, ran a story at the end of September claiming that an Ohio maintenance worker accidentally found scores of boxes filled with ballots cast for Hillary Clinton and other Democratic Party candidates. This shows that “Clinton and the Democrat Party planned on stealing the state on Election Day, making any campaigning there now a waste of time” declares the newspaper.

The story has since been removed from the web site, but a screenshot of the publication is available. The fact checking site Snopes completely debunked the Christian times Newspaper’s story, showing that the photograph used to illustrate this fake was actually taken in 2015 in Birmingham and shows a man unloading ballot boxes from a truck for the 2015 UK general election.

The Christian Times Newspaper has been published other fakes in the past, among them a claim that July 4, America’s Independence Day holiday was cancelled because of terrorism threats.