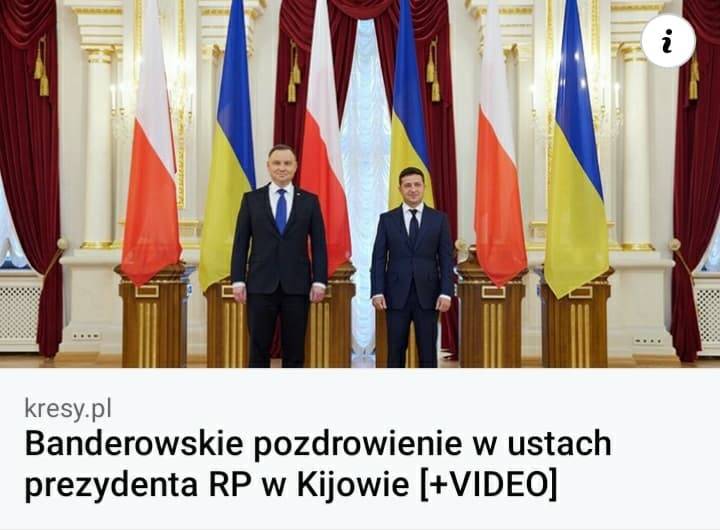 President Andrzej Duda together with first lady Agata Kornhauser-Duda arrived on Sunday (11.10) in Ukraine for a three-day visit. President met with the highest Ukrainian authorities and visited the Polish Military Cemetery in Kyiv-Bykivnia. In the presence of the polish president they signed the economic treaty in Odessa.

During the visit the presidents of Ukraine and Poland Wolodymyr Zelenski and Andrzej Duda signed a joint declaration, underlining the importance of Polish-Ukrainian bilateral relationships, which are of the strategic partnership nature. They expressed their will of versatile development for the societies and economies of Poland and Ukraine.

Important point of declaration was a plea to end the illegal occupation of the autonomous Republic of Crimea and the persisting aggression on Donbas area. The President emphasized that Poland “stands firmly with Ukraine on the matter of their borders”.

– We stand unequivocally on the position that Crimea is occupied and we declare it everywhere: not only here in Kyiv, not only in Warsaw, but also on the multinational forums – president assured.

Furthermore Andrzej Duda on a joint press conference with the president of Ukraine indicated, that the signed declaration defines in a clear way further cooperation between two countries:

– It [the declaration] shows our attitude towards the current relations between Poland and Ukraine in the key aspects, from economic matters to political ones and related issues of security which are of such importance today in these modern times, that we live in, finally it touches on the historical matters, which I deeply believe will bring our nations into a closer bond of neighborly and friendly relations.

The important element of the visit was the signing in the presence of both presidents of the confidentiality agreement between PGNiG and Ukraine’s State Property Fund, which allows the polish company to get involved in the process of privatization of the Ukrainian energy sector.

As it was expected this visit has become the reason for multiple attacks on president Andrzej Duda by the pro-Russian groups. The closer relations between Poland and Ukraine especially when it comes to the energy sector and integrity of Ukraine’s borders, but also when it concerns the historical subjects, evokes immediate response that aims to fuel the anti-Ukrainian attitudes in Poland. The words used to do just that are in this case: “Slava Ukrainie!” (“Glory to Ukraine” – trans.), which is the official salutation in Ukrainian army.

The pro-kremlin portal Kresy.pl published the article titled “Bandera’s greeting in the mouth of Polish President in Kyiv”, in which we read:

“After the playing of anthems of both countries Andrzej Duda has performed the check of the guard of honor, honored the military banner and saluted Ukrainian soldiers with words “Slava Ukrainie!” (Glory to Ukraine), to which they answered “Heroyam slava” (glory to heroes). It is important to emphasize that words Slava Ukrainie!” (Glory to Ukraine) and response “Heroyam slava” (glory to heroes) was the salutation of the Bandera’s genocidal Organizations of Ukrainian Nationalists, responsible for the killing of over 100 thousand Poles. Until 1943 this greeting entailed also a fascist gesture of raised right hand. It was popularized during the protests on Kyiv’s Maidan, since August 2018 it has become the official salutation of the Ukrainian army and police”.

Reduction of the words “Slava Ukrainie” (Glory to Ukraine) to the Bandera’s greeting is a historical lie and manipulation, which was pointed out by the professor Przemysław Żurawski vel Grajewski:

“Sentence “Slava Ukrainie” first appeared in the poem by the greatest Ukrainian bard Taras Shevchenko “To Osnovianenko”, written in 1840 and modified in the year 1860. That would mean that it was created 98 years before the creation of UPA, and its author was a man that in a different poem – “To the Poles” wrote: “… Pole, companion, brother (…) Give your hand to the Cossack and make your heart favorable towards him and together in the name of Christ we will rebuild our silent paradise.”

In the Ukrainian army the salutation appeared during the time of Ukrainian Soviet Republic, 19th April 1920 when the following policy was introduced: “To all soldiers of the army for the glory and thanks for the service to Ukraine we respond Glory to Ukraine!”.

As it is indicated by the prof. Żurawski vel Grajewski – nations usually have a very complicated history and the symbols created in the process remain a part of their dear tradition, even when there are periods, when they were used by criminals:

“No-one in their sane mind expects Polish president to refuse the participation in the Greeting ceremony in Berlin, when they play the anthem of RFN even though the melody to it (not the words) are “Deutschland, Deutschland über alles”. Similarly no one expects that kind of reaction to the sound of Marseillaise, which accompanied genocide in Vandee. The Russian anthem has the melody of the USSR anthem – the country in its totality criminal. It is there that it was created and it relates to no other tradition. The Russian military ceremony is the mix of czar’s and soviet and somehow it does bother the polish nationalists”.