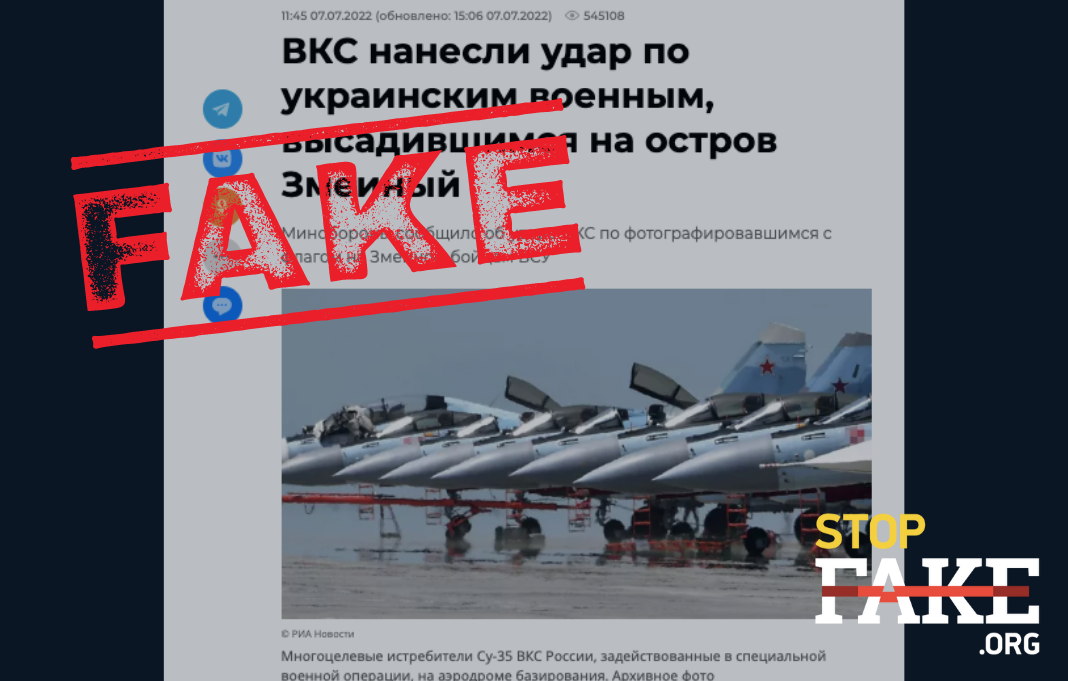 Russia’s Defense Ministry claims its troops destroyed Ukrainian servicemen who raised the Ukrainian flag on strategic Snake Island after Russian forces withdrew. The Ukraine’s General Staff says the troops completed their task and returned to their base unharmed.

No sooner had the Ukrainian military released a video showing Ukrainian forces raising the Ukrainian national flag on recaptured Black Sea Snake Island, than Russia’s Defense Ministry announced that some of the Ukrainian servicemen “were killed while trying to raise the flag, while others managed to escape.”

“Kyiv once again incurred losses, this time for the sake of a PR campaign with the hoisting of the Ukrainian flag on this rock in the Black Sea” blared the Moskovsky Komsomolets newspaper. RIA Novosti chose to completely negate reality and declared that the Russian army “did not allow the installation of the Ukrainian flag” on Snake Island.

Ukraine’s Armed Forces General Staff provided details of the operation on their Facebook page. After checking the island’s coastal zone for mines, Ukrainian forces arrived on the island during the night of July 7. Engineers cleared a passage of mines and traps after which the landing operational group inspected the area and collected data on enemy equipment left behind on the island.

According to the Ukrainian military, the commandos found the island in complete ruins with abandoned ammunition and military equipment. They destroyed some 30 pieces of Russian equipment left on the island.

After completing their mission, the group set up Ukrainian flags in different parts of the island. They also hoisted the flag of the 73rd Maritime Special Operations Squad.  The raising of Ukrainian flags on Snake Island was also confirmed by Odesa Regional Military Administration chief Serhiy Bratchuk.

Ukrainian military have also confirmed that Russian ships attempted to shoot at the Ukrainian troops, however they began shelling after the Ukrainian group had already left Snake Island and subsequently hit the pier.

After the Ukrainians returned to their base unharmed, photographs and video of their successful mission were made public.

Ukraine’s southern operational command reported that during a dawn reconnaissance flight over Snake Island, the island was attacked by two missiles, resulting in significant damage to the pier.

In his daily video address Ukraine’s President Volodymyr Zelensky noted that the return of the Ukrainian flag to Snake island was the final stage in the struggle for the strategically important isle. The campaign for regaining control of the island lasted two months and involved many branches of the Ukrainian Armed forces, from Border Guards to intelligence services and the Air Force. The goal of the operation was not to plant the Ukrainian flag on the island, but to liberate Ukrainian territory from Russian occupation, Zelensky emphasized.

According to media estimates, the value of the equipment the Russian military lost at Snake Island is some $915 million. The island was occupied by Russian troops on February 24, it was liberated on June 30. Radio Liberty published a chronology of the liberation struggle for the island on its website.

StopFake regularly debunks phony pronouncements and declarations made the Russian Defense Ministry and dutifully disseminated by its servile media. One of the latest was the Ministry’s claim that they had destroyed 234 Ukrainian aircraft and 137 helicopters.