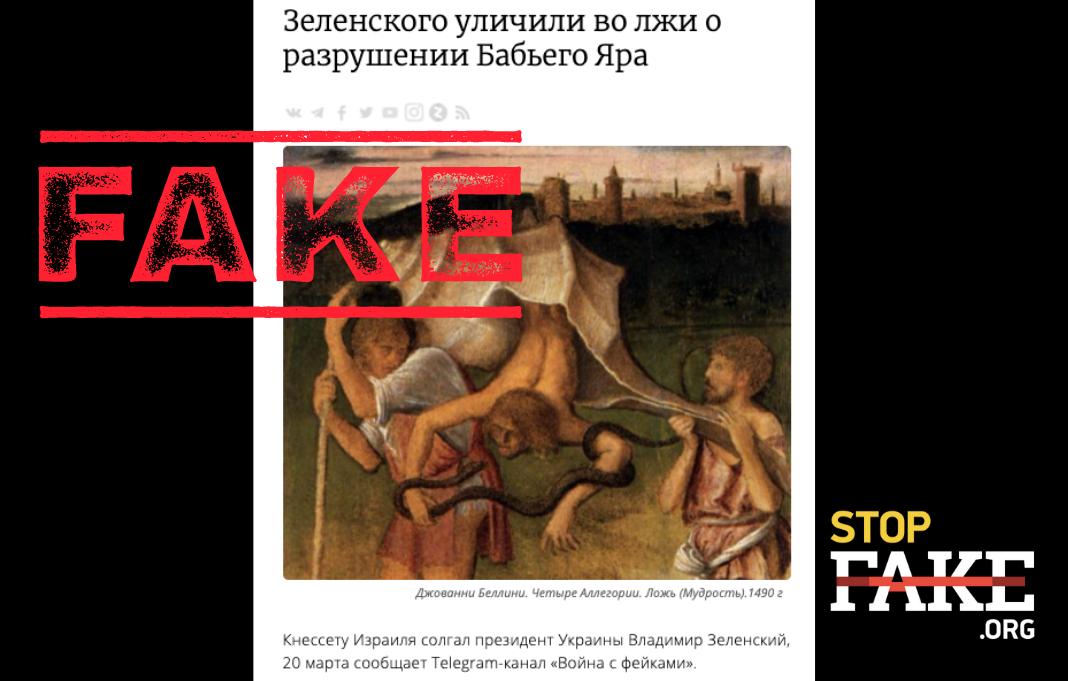 During the March 1 shelling of Kyiv, the Russian army fired on the Kyiv television tower, one missile hit the television center’s technical building, another the Avantgarde building on the grounds of the former Jewish cemetery. The issue here is firing on the Babyn Yar memorial complex and not damaging a specific monument. According to the United Jewish Community of Ukraine, the Kharkiv synagogue, one of the largest in Europe has been fired on, the Jewish cemetery in Bila Tserkva and a number of other Jewish sites in Ukraine have been shelled.

Russian media have claimed that Ukrainian President Volodymyr Zelensky lied during his speech to the Israeli parliament, saying that Russian missiles hit Babyn Yar. There was no destruction on the territory of the memorial, they claim, citing an Israeli journalist.

Russian propagandist media are using the testimony of Ron Ben-Ishay who says that he walked through the entire Babyn Yar memorial area the day after the attack and found no trace of bombs or rockets. As proof, Ben-Ishay published a photograph of himself at Babyn Yar with the menorah monument in the background.

Russian invading forces shelled the Kyiv television tower on March 1. The tower is right next to the Babyn Yar memorial. President Volodymyr Zelensky tweeted on that day “Why repeat ‘never again’ for 80 years and keep silent when a bomb falls on BabynYar?” Ukrainian Foreign Minister also pointed to the symbolism of this Russian attack: “Kyiv’s television tower, which was just hit by a Russian rocket is located in Babyn Yar. On September 29-30, 1941, the Nazis killed more than 33,000 Jews here. 80 years later Russian Nazis strike at this place to kill Ukrainians”. Neither Zelensky nor Kuleba talked about the Babyn Yar memorial being ruined, what they said was that the Babyn Yar territory was hit by Russian rockets.

On March 4, the Center for Spatial Technologies and the Babyn Yar Holocaust memorial Center reported that the Russian missile strike hit very close to the place where the execution of Jews, Roma and other nationalities took place, only some 20-30 meters away.

“The executions in Babyn Yar lasted from 1941 to 1943 and 70,000-100,000 people were killed here, we can consider the entire tract of this land as Holocaust territory which should not be touched” said Maxym Rokhmaniyko, the director of the Center for Spatial Technologies.

The Babyn Yar Holocaust Memorial Center published a map showing where the air strikes hit and indicating the location of the Jewish cemetery and the location where a museum is to be built in the future. The map shows that the rockets hit very close to the cemetery and almost right next to the building of the future museum.

The shelling was also condemned by the Israeli Foreign Ministry.

According to the United Jewish Community of Ukraine, at least six Ukrainian Jewish sites were affected the Russian Federation’s “denazification” war, among them the Kharkiv choral synagogue.